San Luis Obispo County is in another drought, and the level of alarm varies by community 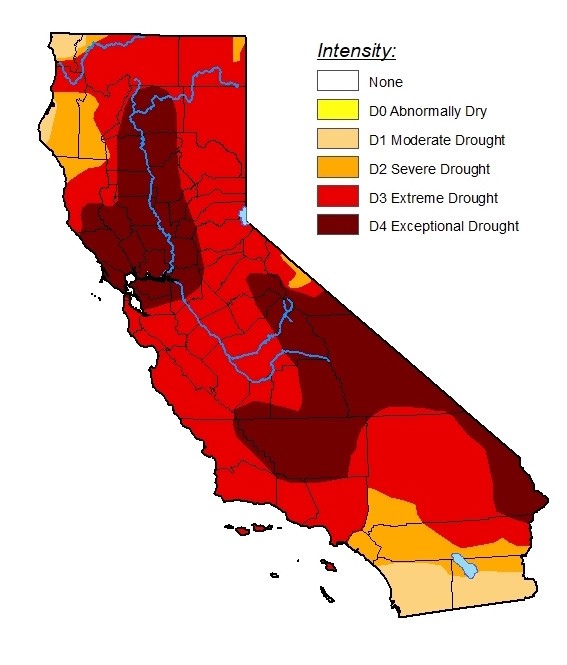 Gov. Gavin Newsom stood in front of Lopez Lake near Arroyo Grande on July 8 and made an announcement to all of California: 50 of the state's 58 counties, including San Luis Obispo, are officially in a new drought emergency. Citizens statewide will be asked to voluntarily cut their water consumption by 15 percent.

"Conditions are such that they continue to devolve," said Newsom, backdropped by the steep banks of a 35-percent-full Lopez Lake. "We are encouraging people to do common-sense things. We have been through these before and we've come through them remarkably well because Californians have taken these declarative directions to heart."

The governor's announcement came at an appropriate time for SLO County, according to local officials who have anxiously watched reservoir levels decline after consecutive dry winters.

This past year, SLO County reservoirs saw about 50 percent of their normal rainfall. Their current conditions are starting to mirror those of the last drought from 2011 to 2017—one of the worst in state history. Lake Nacimiento is at 22 percent capacity, while Santa Margarita Lake sits at 64 percent capacity.

On July 13, the SLO County Board of Supervisors voted to declare a local drought emergency—a move that opens up channels to receive state and federal aid and triggers local drought response plans.

A county staff report for the declaration cited, "record low rivers and reservoirs, snowpack below 40 percent of normal levels, and extremely low rainfall totals throughout California."

"It's definitely concerning," said 4th District Supervisor Lynn Compton. "Because we had back-to-back droughts, it seems like we just never got out of it."

For local water officials, the critical but unanswerable question now is: How long will this one last?

"It's not going in the right direction—how much more of this can we handle?" said Courtney Howard, a water resources division manager for SLO County. "It's really that next year that's concerning me. I think the reservoirs in particular will continue to drop if we don't get saturated watersheds. Then, the groundwater basins will continue to have stress."

The degree of alarm about the new drought—and actions taken thus far—vary by community.

In South County, the anxiety is high because most of the Five Cities region relies on a combination of Lopez Lake, which has just two years of storage remaining under current drought conditions; groundwater; and state water, which is delivering at only 5 percent of capacity this year.

Last month, the city of Pismo Beach enacted water restrictions that prohibit a variety of excess water uses at homes and businesses. In Arroyo Grande, where some mandatory restrictions are already in place, additional percentage cutbacks for customers are likely coming soon, according to Utilities Director Shane Taylor.

"As the level of Lopez Lake drops, one of the triggering conditions ... is when the lake gets to 15,000 acre-feet. That's predicted to happen in the first part of October," Taylor said.

At that point, all of the Lopez Lake contractors—Arroyo Grande, Pismo Beach, Grover Beach, Avila Beach, Oceano, and local farmers—will see a 10 percent cut in their supply. If the lake hits 10,000 acre-feet of capacity, that cut increases to 20 percent, which nearly happened in 2016 at the height of the last drought, Taylor said.

The problem for Lopez and other reservoirs, he said, is a simple lack of rain.

"Lopez Lake has been a sustainable source of supply since it was built, but in these past 10 years, it's been stressed," Taylor said. "We've had low rainfall totals three years running. We came out of the drought, and now we're running back where we were in 2014-15."

Taylor noted that SLO County is entering this new drought despite the fact that residents are conserving more water now than they were before the previous drought.

"People have reduced their water so much since the last drought," he said. "You can squeeze the sponge only so much."

In the city of SLO, officials are less worried about the drought and its impact on their water supply, since the city gets water from several sources—including Lake Nacimiento, Santa Margarita Lake, Whale Rock Reservoir, and groundwater.

State water deliveries fluctuate every year depending on conditions. This year, the project is delivering at just 5 percent capacity—down from 85 percent in 2017—which forces SLO County to use state water stored at San Luis Reservoir, where it has about 2 1/2 years of water left in storage.

Although SLO County has the rights to 25,000 acre-feet per year of state water, it only has the capacity to actually deliver about 20 percent of that, due to infrastructural limitations. That is a problem that dates back decades, according to Howard, the county water resources division manager.

"In the '90s, when we [SLO County] said, 'OK, who wants to take state water?' only a certain percentage of agencies came forward, and they only asked for 5,000 out of the 25,000," Howard explained. "So the [Board of Supervisors] at that time decided to participate in building the local infrastructure at that capacity. Once that pipeline was built, we were sort of limited to that amount of water going through the pipeline."

Another alternative to reservoir and state water is groundwater, but from Paso Robles to Los Osos, local groundwater aquifers are also overstressed. As the drought intensifies, officials worry that the basins will take another hit, just as farmers, communities, and residents are required to bring them back into balance under the state's Sustainable Groundwater Management Act.

In Arroyo Grande, Taylor said the city's groundwater wells are "hanging in there OK," and they may be relied upon more, given the condition of Lopez Lake. The city is also exploring buying into state water and participating in the Central Coast Blue recycled water project with Grover Beach and Pismo Beach.

It's a challenging predicament that Taylor said there's really one ideal solution for.

"It's tough," he said. "We just need some more normal average winters of rainfall." Δ

Assistant Editor Peter Johnson can be reached at pjohnson@newtimesslo.com