Fifty years ago in San Francisco, around 100,000 flower children converged in a gathering now known as the Summer of Love. These young people were against the Vietnam War; distrusted conservative government; and rallied for freedom, tolerance, and inclusivity. Somehow, 50 years later, we now seem to be back to square one. We're sick of endless war; Trump's administration appears to be corrupt and anathema to the young and working class in favor of the rich; and fascism, racism, and intolerance abounds.

What we need is a reminder of the optimism, energy, and activism of the Summer of Love, and this Sunday, Aug. 6, we're going to get it when the SLO County Progressives host the San Luis Pop Festival at Mitchell Park (11 a.m. to 3 p.m.; all ages; $15 at sloprogressive.org/pop or free for kids 12 and under).

"Celebrating the spirit of the '60s, SLO County Progressives are bringing Golden Gate Park in San Francisco to Mitchell Park in San Luis Obispo to mark the 50th Anniversary of the Summer of Love!" according to organizers. "The event will feature compelling speakers, live music, and a variety of food and drink offerings."

Park in the Marsh Street parking structure and bring low back chairs and blankets. Expect food trucks, beer, and wine.

Mulgrew won Album of the Year during the New Times Music Awards, twice! Born in Morro Bay, he's since spent time in Nashville and currently lives in San Diego though his close ties to the Central Coast bring him home often. His silky smooth vocals are reminiscent of the Everly Brothers and Jeff Buckley. 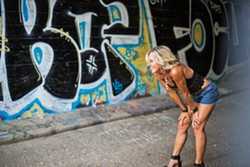 B and the Hive features Brianna Lee's ethereal vocals, which have led to opening spots for the likes of Elvis Costello, the Goo Goo Dolls, and Lucinda Williams. Formerly known as Girls + Boys, the group has amazing chemistry and writes songs that hook you.

SLO Women's Marchers might remember Black from her performance at the United We Rise post-concert at the Fremont Theater. She's also a New Times Music Award-winner who writes everything from punk anthems to pop gems. This Tom Petty fan has his knack for penning quintessentially American narrative songs.

In between the music will be plenty of inspiring speakers, including

"The current political landscape has sparked a movement and re-ignited a populist legacy that puts people first," SLO Mayor Heidi Harmon said in press materials. "There's been a lot of talk about revolution and resistance this year. This event reminds us that love is the greatest act of resistance of all. We look back with appreciation to celebrate 50 years since the Summer of Love while looking forward to moving toward a more fair, just, and sustainable world."

Proceeds from this benefit event go to support progressive candidates in 2018.

Numbskull and Good Medicine Presents hosts the return of Oklahoma-bred country-rock act the Turnpike Troubadours on Sunday, Aug. 6, at the Fremont Theater (7 p.m.; all ages; $28.50 to $38 presale at ticketfly.com). Charley Crockett opens. 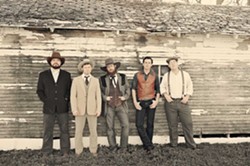 You can hear some Cajun, some bluegrass, some folk, but at heart, the Turnpike Troubadours are a ripping American country rock act that formed more than a decade ago and came up the hard way—on the road in little clubs playing sometimes to audiences who were there to drink, not to listen to music. Slowly but surely they developed an audience drawn to their gritty authenticity.

"When we first started playing, people couldn't have cared less that we were there," Troubadours' frontman Evan Felker recalled in press materials. "They were there to drink beer and raise hell and they didn't really care what music was playing while they did it. But as we went on and as we got better, they started to listen. I mean, they were still drinkin' plenty of beer, but before too long, they were actually coming to hear us and asking us to play our songs, and not just covers of traditional favorites and all the other stuff we'd been doing."

They have four albums under their belts, most recently 2015's eponymous release, and some great videos, but it's all about the material, which digs deep into the human experience.

"All the songs are about people we know," Felker continued. "And yeah, some of them are probably about me to some degree—the guy who ticks off the wrong girl from Arkansas, and the guy who doesn't always like what he sees himself becoming. Mostly though, I think they're just honest. This music, at its best, can put into words what we have been thinking for our entire lives, and even at its worst, it gets people drinking beer and makes people happy. Either of those is fine with me."

Numbskull and Good Medicine are also bringing ripping guitar slinger Samantha Fish to Morro Bay's hot new club The Siren on Tuesday, Aug. 8 (7 p.m.; 21-and-older; $15 presale at ticketfly.com or $18 at the door). The Kansas City-based blues rocker started as a drummer but switched to guitar at age 15 and spent a lot of time being inspired by the traveling blues musicians who played the Knuckleheads Saloon.

The 28-year-old won a 2012 Blues Music award for Best New Artist for her album Runaway. This year she's released her fifth studio album, Chills & Fever, which is a nod to raw, scrappy Detroit rock.

"I grew up on it," she said in press materials. "Working with [blues icon] Luther [Dickinson] on my last album further instilled that spirit in me. It made me realize just how much that basic, unfettered sound means to me, and how well it ties into soul music, R&B, country, and so many other forms of music that are essential even today."

It should be a blast to see Fish tear it up in the intimate confines of The Siren!

Otter Productions, Inc., California Roots, and Ineffable Live join forces to bring the Sounds of Summer Tour with Slightly Stoopid, Iration, J. Boog, and The Movement to Avila Beach Golf Resort this Sunday, Aug. 6 (4:30 p.m.; all ages; $20.82 to $99.74 on eventbright.com or in Boo Boo Records). 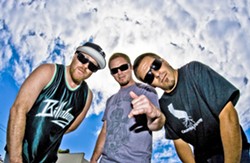 This is going to be a super chill evening of great music, everything from Slightly Stoopid's SoCal skate-punk, ska, hip-hop, sampledelic pop, and thrash aesthetic to Santa Barbara-based Iration's reggae, dub, and rock.

Iration recently released the single "Fly with Me," which rose to No. 1 on the iTunes Reggae Songs chart the day of its release. The song will appear on the band's upcoming studio album.

J. Boog will bring his R&B and rap to the proceedings, and The Movement, which was formed by a trio of Sublime and Pixies fans in 2004, will bring their reggae-rock.

Expect the dank to be wafting!

Yes, Vina Robles Amphitheatre hosts Mexican acoustic rock-maestros Rodrigo y Gabriela this Thursday, Aug. 3 (8 p.m.; all ages; $45 to $55 at vinaroblesamphitheatre.com), and they're amazing entertainers, but the big buzz is on the Slayer show!

On Tuesday, Aug. 8 (7 p.m.; all ages; $59.50 to $375 for VIP package), SiriusXM Liquid Metal presents Slayer with Lamb of God and Behemoth at the Vina Robles Amphitheatre.

As their publicist jokes, "There are many perilous ways one can spend time off—Volcano-boarding down Cerro Negro, Nicaragua's active volcano, or maybe bungee jumping from a helicopter over the bubbling crater of Chile's Villarrica. How about a visit to Sao Paulo's Snake Island, home of some 4,000 golden lancehead vipers whose venom can melt human flesh, or shark diving without a cage in South Africa? But nothing is quite as hazardous or risky as a night in the pit at a Slayer concert. Add to that the ferociousness of Lamb of God and Behemoth, and you've got a Satan-approved triple bill of Biblical proportions."

Satan, Satan, Satan! Slayer has made a career of covering topics such as murder, serial killers, necrophilia, Nazism, torture, anti-religion, and other gross, stupid, ugly behaviors. They've been sued many times, once locally by the parents of Nipomo resident Elyse Pahler, who was murdered in 1995 at age 15 by three kids in what they claimed was a sacrifice to Satan inspired by Slayer songs such as "Altar of Sacrifice" and "Postmortem."

Their newest album, 2015's Repentless, continues with their themes: In "Vices," frontman Kerry King wails, "Life drags on and we watch it bleed/ On controversy and madness we feed/ It's a rush you can't deny/ A little violence is the ultimate drug/ Let's get high."

This is obviously a controversial band, though a judge in the Pahler lawsuit dismissed the case. Listening to music does not cause people to murder—an evil mind does. I, like most listeners, think Slayer and their Satan-centric focus is a gimmicky joke, but they're wildly popular, and they've also been nominated for a Grammy five times and won twice for Best Metal Performance in 2007 for "Eyes of the Insane" and 2008 for "Final Six."

Opening act Lamb of God also explores dark themes, and as frontman Randy Blythe said in press materials, "It's been a while since we've toured with the almighty Slayer, and even longer since we've hit the road with our friends in Behemoth—I can't wait! This tour is gonna be the feel-good event of the summer—the gigs are gonna be like the Haight-Ashbury during the Summer of Love in '67! OK, so that's complete bullshit; it's gonna be absolutely nothing like that, so don't show up with flowers in your hair looking for free hugs or anything stupid like that. It will definitely be a good fucking time though (as long as your definition of a good time means brutal, caustic, and hideously loud music)—see ya there!"

Folk quartet Sean Pawling and His Band return to Linnaea's Café this Thursday, Aug. 3 (7 p.m.; all ages; pass the hat). Pawling has the vocal range of Jeff Buckley and Jason Mraz with songs inspired by Belle & Sebastian and The Beatles.

Stanley Stern (piano), Mario Ojeda (violin), and four tango dancing couples will perform at SLO's First Presbyterian Church this Friday, Aug. 4, for their next Brown Bag Concert (noon to 1 p.m.; all ages; free). Bring your lunch to Wilson Hall and soak up the passion!

All right, musicians and songwriters, the Ninth Annual New Times Music Awards continues to solicit entries (Click here for the rules and entry form)! The deadline to turn in entries is Monday, Aug. 21, at 5 p.m. There's also a youth category this year, so you kids get to work, and good luck! Hopefully you'll be playing the awards show at the Fremont Theater on Friday, Nov. 3! Δ