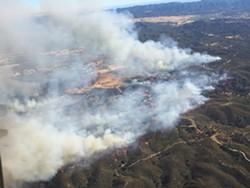 David Lynn Macagni, 75, was charged with a misdemeanor count of "recklessly causing a fire of a structure or forest" by the SLO County District Attorney's Office, based on an investigation by the state Department of Forestry.

A vehicle allegedly caused the fire on June 26, according to Assistant District Attorney Eric Dobroth. It then torched 1,642 acres of rural Santa Margarita and injured a firefighter.

Macagni, a registered sex offender, faces up to six months in jail and/or a $1,000 fine for the offense. Macagni is listed by the county assessor as the owner of property on Parkhill Road—close to where the Hill Fire started.