The proposed Las Pilitas quarry near Santa Margarita pits area residents against the project applicants and their supporters, and the rocky controversy is moving full speed ahead toward the SLO County Board of Supervisors.

Las Pilitas Resources LLC is proposing to open a rock quarry on Highway 58, 3 miles outside of Santa Margarita, to mine aggregate, or rock-based construction materials. The project would bring significant environmental impacts to the area, and those have made every turn the project’s taken through the planning process contentious. The significant and unmitigable impacts identified by the project’s Final Environmental Impact Report led planning staff to firmly recommend the project be denied. 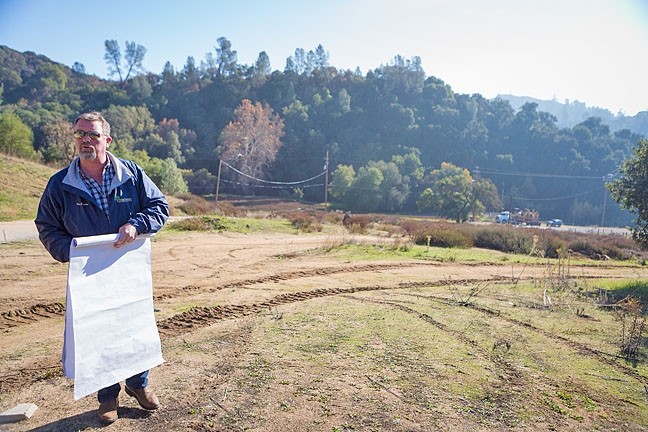 The SLO County Planning Commission spent hours wrestling with the proposal at three separate meetings in December and January. At those meetings, staff laid out a detailed case for why the project shouldn’t be approved as the project applicants attempted to poke holes in the staff report and downplay the impacts it outlined. The planning commission eventually sided with staff, voting 3-2 to deny the project.

The applicants appealed that decision, sending it to the Board of Supervisors’ May 12 meeting. There, supervisors will face the hard decision of whether to uphold the planning commission’s ruling or grasp at findings to make overriding considerations, which would be necessary for the board to approve the project—it would have to overrule the environmental review process and the several unmitigable impacts it identifies.

Ken Johnston, project manager for Las Pilitas Resources LLC, argues that the identified impacts are both exaggerated and are a fact of life when it comes to finding a quarry site.

“We can’t pick and choose where we put quarries.” Johnston said. “Mother Nature did, and the state of California put a highway right where that is.”

But the site’s location is exactly what’s causing the different opinions of what impacts the surrounding community should have to bear and whether the quarry’s even necessary in the first place.

“Santa Margarita has retained its small-town rustic charm. Highway 58 is a narrow highway, limited shoulders, limited sight distance, leading to the proposed strip mine,” said Robert Meek, a resident of the Parkhill Road area just east of the project, at a Dec. 11 planning commission meeting. “The thought of allowing an industrial strip mine in this area to fulfill an imaginary demand for additional aggregate and competition is very disturbing.”

Two major elements are at the center of the debate: the number and frequency of the trucks hauling aggregate and whether the quarry would provide a needed supply of additional aggregate to parts of SLO and Santa Barbara counties.

The former is a major hang-up for the project, especially because at peak production, it could require a maximum of 273 truck trips that would drive through Santa Margarita daily.

The latter is an argument floated by the applicants in an effort to sidestep arguments against the project and highlight the greater good of balancing supply and demand—the applicant contends that the quarry would be fundamental in providing rock to local construction and road improvement projects. Opponents say extra rock isn’t needed, and there’s already enough supplied by the two local existing quarries.

A report issued by the California State Mining and Geological Board (SMGB), which oversees everything mining related, supports the arguments that there could be a future rock shortage, however it’s not necessarily the type of rock Las Pilitas would be producing.

“They’re tasked with making sure that California and all the regions have the building blocks to maintain society,” Johnston, the quarry project’s manager, said.

Every 10 years, the SMGB issues a report assessing the supply and demand of aggregate for the next 50 years. Johnston and the project’s attorney, Sophie Treder, point to the SMGB’s 2011 Special Report (SR) 215, which identifies both the demand and the permitted reserves that exist within the San Luis Obispo-Santa Barbara Production-Consumption Region (SLO-SB PC Region) from 2011 to 2060. The 50-year projections differentiate between the rock already permitted but not yet extracted—known as “reserves”—and rock that is identified for potential future extraction, but not yet permitted, called “resources.”

The report estimates that there aren’t enough permitted reserves to fulfill the 50-year demand for a specific kind of aggregate. For this reason, Johnston argues that the proposed quarry is a necessary piece for the future.

The particular kind of rock that the Las Pilitas quarry is proposing to produce isn’t the aggregate identified to be in low supply by the report. The report specifies that there will be a need for aggregate used to produce portland cement concrete (PCC)-grade aggregate and asphaltic concrete (AC)-grade aggregate, neither of which would be produced by Las Pilitas because it doesn’t have an adequate water supply to process those grades.

Two quarries in the area already produce PCC- and AC-grade aggregate. While there aren’t currently enough permitted reserves to supply the projected 50-year demand, long-term specific plans—which already have received environmental review—do exist. Those plans include several phases that receive permitting each step of the way, which enables local agencies to permit as they go, rather than granting permits that would last 50 or 100 years.

Planning staff noted that approving additional phases for existing quarries is likely, because impacts like truck traffic and noise remain roughly the same as they go from one phase to the next.

All things considered, planning staff identified approximately 233 to 302 million tons of total resources at existing quarries, which could satisfy the projected 273 million ton demand identified by SR 215 without the Las Pilitas quarry entering the picture.

Regardless, the applicants still think their quarry would contribute necessary resources to the mix. Project opponents say that argument misses the point.

Babak Nacify, attorney for Margarita Proud, a group of Santa Margarita-area residents opposing the project, told New Times that focusing on SR 215 doesn’t hold water in the case of the Las Pilitas quarry.