Santa Margarita Ranch, the highly contentious ag-cluster subdivision, was shot down by the Planning Commission on Oct. 9. The most contentious issue wasn’t that it was denied, but when. 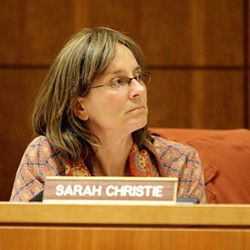 Adam Hill, who takes office in January, is expected by many to swing the majority vote from pro-growth to slow-growth, joining Supervisors Bruce Gibson and James Patterson. But before the year is over, lame-duck Supervisors Jerry Lenthall and Harry Ovitt may still have a vote on the appeal.

And, by the looks of things, ranch owners took the Planning Commission’s denial quite well.

Following the hearing, ranch co-owner Doug Filliponi left the room in outwardly good spirits. He walked side-by-side with Lenthall and was joking, shaking hands, and even handing out a few hugs.

He said he intends to appeal the decision. Although no appeal was officially filed as of Oct. 10, a small 90-minute window is scheduled on the Nov. 18 Board of Supervisors meeting.

Santa Margarita Ranch has been caught in a tug of war since the first public hearing in July. Pulling at opposite ends, Commissioners Bob Roos and Sarah Christie have repeatedly accused each other of hijacking the hearing process.

Both commissioners denied they had attempted to manipulate the timeline. They did, however, point fingers at each other.

Christie said she gave Santa Margarita Ranch the same scrutiny she would have given any other project and a “potential byproduct of that process may well have been that it would end up with the future board.”

Roos’ rhetoric was much the same.

“My concern is not which board it goes to,” he said. “My concern is [to] give the applicants a fair shake to take input from the community and do it in an expeditious manner.”

Throughout the process Roos would push for votes—with limited discussion—when it appeared there was a simple majority. Conversely, Christie prompted time-consuming discussions by focusing on the minutia of staff and environmental reports. 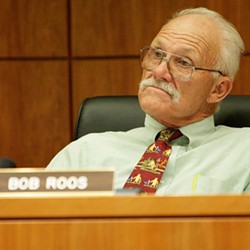 They agree there will be a dramatic political shift next year. That belief doesn’t hold much weight with the incoming supervisors.

Hill said he would not be a slave to ideology when he votes. In fact, Hill said he met with Santa Margarita Ranch owners to tell them his mind was not made up, should the project carry over to his term. “It makes it easier for people to think that [the board] is going to swing from one direction to the other,” he added.

Frank Mecham will replace Supervisor Harry Ovitt and is expected to become part of the new pro-growth minority. Like Hill, Mecham didn’t believe much in the rumored political change.

“I haven’t felt or heard from the supervisors anything that makes me feel that there is a political ideology that will be followed as opposed to the issues that [are] at hand and how we deal with [them].”

Regardless, the changing of the board has often been the dirty little secret behind Santa Margarita Ranch.

The project has been steeped in criticism over environmental impacts and policy inconsistencies. The final vote to deny came after four lengthy public hearings in which the commission addressed only a fraction of the project’s 10 unmitigatable impacts.

“Basically what we did in our denial was to dump an unanalyzed project on the Board of Supervisors to meet the applicant’s politically motivated deadline,” Christie criticized.

Tempers flared after Roos prompted a schedule change that moved the Santa Margarita hearing from the afternoon to the early morning session with almost no public notice.

Eric Greening called the move an “insult to the public” and “sloppy” decision-making. David Blakely, a member of the opposition group, Santa Margarita Area Residents Together, accused the commission of “truncating” the public process.

Christie tried twice to convince fellow commissioners to stick to the original schedule but was outvoted 2-3 on both attempts.

By the end of the day the commission did vote to deny the project. Commissioner Penny Rappa was the sole “no” vote, but said her reasoning had more to do with the commission’s behavior than the project itself.

With that vote the Board of Supervisors will soon have a 21-page list of denial findings to mull over and significantly less time to hear the appeal, unless there is a mutually agreed continuance.

“It was a frustrating process,” Roos said in a later interview. “And, you know, there’s going to be people who are going to wonder, ‘Well, did he just deny it so he could get this decision and move on?’”

Writer Colin Rigley can be reached at crigley@newtimesslo.com