The Hill Fire southeast of Santa Margarita burned through 1,600 acres and destroyed four structures as of June 30. An emergency evacuation notice was lifted for area residents on June 27. 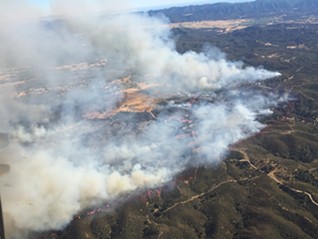 The fire was 95 percent contained on June 30, Cal Fire officials said, with favorable weather conditions helping crews get a handle on the blaze.

On June 26, Cal Fire received an emergency call regarding "car fires" in an area about 3 miles from a Cal Fire station at Parkhill Road. There were reportedly two fires in the area that merged into one. An investigation is ongoing into the origin of the fire.

"I'm not sure what came first, the fire or car fire," said Chris Elms, a Cal Fire public information officer.

At its height, the Park Fire called for 1,200 fire fighters, eight aircraft, and four helicopters.

Elms said those numbers have been reduced, but that the firefight will likely continue for the next few days as crews work to gain 100 percent containment and mop up the interior.

Highway 58 is currently open, with closures still in place (open only to residents) at Parkhill Road.