Whenever summer decides to grace us with its presence, certain treats are a must at picnics, Fourth of July parties, and community gatherings. Among fresh watermelon, pies, and lemonade, the vital ingredient to a well-rounded gathering is ice cream. According to the International Dairy Foods Association, ice cream's origins are known to reach as far back as the second century B.C. The first official account of the dessert in the United States came in the form of an advertisement in the New York Gazette on May 12, 1777. At the time, ice cream was an exotic treat enjoyed mostly by the elite. In the 19th century, the confection was more available to the public—until the dessert was rationed during World War II. As prepackaged ice cream sold at supermarkets gained popularity in the 1940s through the 1970s, traditional ice cream parlors and soda fountains started to disappear.

One Central Coast couple is ready to bring the local ice cream shop vibe back to their community. Victor and Natalie Bryson have loved ice cream since they were kids.

"I absolutely love it. When I was going to school I would go to the ice cream shops around here, and I just had a lot of ideas about flavors as well as other things that just weren't being done," Victor said.

It didn't really occur to Victor that he could bring his ideas to fruition with his own business until about 10 years ago. After testing out different recipes and flavors, Victor and Natalie found something that stuck—an ice cream catering business called Creme De La Ice Cream. 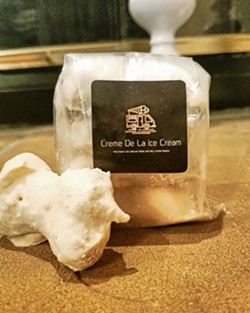 "We wanted to start a company to do different things where people can come to our ice cream shop, have fun, and enjoy flavors they want, wouldn't expect, or could possibly even create themselves," he said of the Santa Maria-based company.

The pair began taking orders last year and really has tried to customize their flavors to their customers' desires or the specific event. For this past Cinco De Mayo celebration, the couple was asked to cater an event where they made horchata and tres leche cake batter flavors scooped into homemade waffle cones that were dyed red and green.

They also have more traditional flavors like strawberry, mint and chip, peach cobbler, and vanilla bean. The difference between Creme De La Ice Cream and some of its competitors is that all the ingredients are fresh, from the Santa Maria-grown strawberries to the freshly scraped vanilla beans. They even have ice cream push pops and sorbet flavors.

Their most popular flavor is s'mores. It's covered by a layer of chocolate that, when broken, exposes a rich and creamy vanilla ice cream packed with roasted marshmallows and pieces of graham cracker. While it sounds like a lot in one pint of ice cream, every ingredient is perfectly balanced.

Victor uses lactose-free milk in all of his ice creams. Natalie said it's easier on the stomach to use this milk for all ages to enjoy.

It takes Victor about an hour to make three gallons of ice cream at a time, so depending on the number of people they're catering for, he said he usually takes an order a few days or a week in advance. He likes to make the ice cream a day before it's ready to be served, keeping it as fresh as possible.

Victor and Natalie have plans to open up a brick-and-mortar shop in Santa Maria this year. While customers will still have the option of a cup, cone, or waffle cone, Victor said they're introducing a cookie cup, chocolate spoon, and chocolate or chocolate-covered straws.

"That's part of the creativity that we're hoping to bring to ice cream, to really kind of enhance that experience," he said. Δ