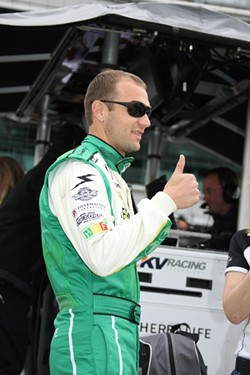 It’s a long way but a fast drive from Santa Maria to Monte Carlo, as local motor-racing legend Townsend Bell can attest. Bell moved to San Luis Obispo as a teenager, honed his skills at a go-kart track beside the Santa Maria airport, took his driving prowess to Europe, and there earned the opportunity to pilot Formula One cars, at the very pinnacle of motor sports.

Bell is among very few American drivers to have competed professionally on the most prestigious racing circuit in the world. “Lining up on the grid at Monaco will always be a great memory,” Bell recounted of racing a Formula 3000 car on the streets of Monte Carlo. “The tight confine of that course combined with the speed of our racecars was genuinely insane. I’ll always remember the Monaco F1 weekend as the most outrageous display of wealth I’ve ever witnessed. Ferraris parallel parked everywhere you looked, personal yachts that would put some cruise lines to shame, and cocktails selling for $90 each!”

Bell devoted 2002 to competing in the American CART (Championship Auto Racing Teams—Indy-type cars) series for Patrick Racing with disappointing results, so turned his attention to Europe, where he secured his drive in F3000—the category one step below Formula One—with Ardent International. During a ten-race season in 2003, Bell flirted with outright victory, reached the podium, and impressed several Formula One executives. Both Honda and Jaguar invited him to help sort their Formula One cars on track with an eye toward becoming a full-time test driver. Though Bell realized his dream of experiencing the performance of a Formula One car, fate thwarted his goal of racing one. Honda offered him a job, but at the last minute British American Tobacco, their title sponsor, insisted the manufacturer hire a Brazilian driver viewed as more marketable, leaving Bell in the cold.

“While racing is racing no matter where it takes place, Formula One is the ultimate form of motor sport, no question,” Bell reflected. “It’s unrivalled in terms of its global appeal, in terms of its technology, and in terms of how sophisticated not only the equipment is but how sophisticated the systems, processes, and teams are. There are 400, 500, 600 employees on a typical Formula One team. It is so well developed and established. And for me it was fun to be around the very best in motor sport.”

He attended the Indianapolis 500 at age ten, where he became hooked by the sport, he recalled. Two years later, he was racing go-karts in Santa Maria, which led him to a succession of junior open-wheel formula cars and eventually into the professional feeder series of the time, Indy Lights.

It was there where Bell distinguished himself at a national level. During his first season in the series, he chased down championship leader Scott Dixon and the two drivers entered the season’s final race vying for the title. Dixon took the 2000 honors, but Bell returned faster than ever the following season and waged a year-long battle with Dan Wheldon, eventually taking the 2001 title. With a national title to his credit, Bell ventured on to CART but that proved to be a very prickly introduction.

“I thought I would go into CART and run at the front right away,” Bell admitted. “While I probably had the raw ability to do that, I didn’t necessarily have the team/car combination or the experience. And the result was a lot of big crashes! When I got fired from my job as a rookie at CART in 2002, I took a step back. That’s when I thought if I were going have to work my tail off for my next opportunity I might as well go after Formula One.”

Yet before he could follow his Formula One aspiration, in 2004, lack of opportunities and a new family prompted Bell’s return to the United States, where he secured a drive with Panther Racing in the Indy Racing League—a series in which he has since remained. He’s competed four times at the Indianapolis 500 against the likes of Dario Franchitti, Helio Castroneves, and Danica Patrick.

“This year was my fourth Indy 500 and it really has started to feel like home to me,” Bell enthused. “I love the state of Indiana quite frankly. I think it’s a wonderful place to be, especially in the summer. Indianapolis is like a big small town.”

Bell has turned his energy beyond driving toward helping others. In a sport brimming with coaches for everything from driving and fitness to nutrition and mental focus, Bell feels that one of the biggest challenges young racers face is securing the financing they need to further their careers. With that in mind, the Avila Beach resident recently established Townsend Bell Sponsorship Coaching – an organization designed to provide emerging talents with the commercial insight they need to succeed.

“Racing is an expensive sport,” Bell concedes. “And as much as I am proud of my success on the race track, I am even more proud that I’ve beaten the odds. I started from absolute ground zero. If you met me when I was 21 you would have probably given me a snowball’s chance in hell of making it. But I figured it out and succeeded and I have all this knowledge and experience in the commercial side of the sport, which is utterly useless unless I can transfer it to other people. So that’s what I’m doing.”

Brett Leigh Dicks is a freelance writer based in Santa Barbara. Send comments via the editor at econnolly@newtimesslo.com