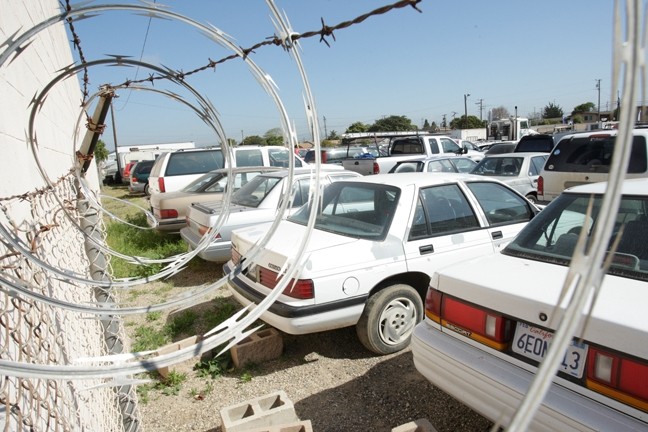 It’s 6:30 p.m. on a Friday evening on Santa Maria’s Main Street. A woman driving a sedan pulls a sharp U-turn in front of a group of 14 Santa Maria Police Department officers and various onlookers. She speeds off with orange safety cones lodged in the car’s wheel-well, and a patrol car soon tracks her down in an alleyway, discovering she tried to avoid the sobriety checkpoint because she doesn’t have a license.

It’s just a half-hour into the department’s bi-monthly checkpoint operation, and she’s the sixth driver caught for the offense—and they’re only stopping every fifth car.

The steady stream of tow trucks hauling away vehicles symbolizes the city’s crackdown on unlicensed and intoxicated drivers—a program that’s getting positive results, according to Cpl. Jesse Silva, head of the department’s traffic division.

“We’re busy out here, no doubt about it.” Silva says.

Local police and city officials say nabbing unlicensed drivers is the key to solving Santa Maria’s massive hit-and-run problem. The city is the hit-and-run capital of the state among similar-sized communities, according to the most recent traffic data released by the California Office of Traffic Safety.

The rankings, compiled from 2007 figures, compare Santa Maria with 105 other California cities with populations between 50,000 and 100,000. They’re based on average rates of motorists and pedestrians killed and injured in automobile accidents per 1,000 people and 1,000 miles of vehicle travel. Figures for 2008 are still being compiled by the agency.

Silva says the No. 1 ranking is indicative of the city’s large population of undocumented workers in comparison with rest of the Central Coast and elsewhere in the state.

“We’re an agricultural community in Santa Maria, and with that we have the influx of the migrant field-worker class,” Silva says. “Unfortunately, a lot of them do not have drivers’ licenses and a lot of them cannot obtain a license at all in the state of California.”

To be tops in California is something, as California has the highest overall hit-and-run fatality rates in the nation, according to the U.S. Transportation Department.

Another major factor in hit-and-runs is driving under the influence, according to Office of Traffic Safety spokesman Chris Cochran. In the agency’s rankings for that category, the city’s motorists don’t fare well either.

In fact, for its size, Santa Maria is ranked No. 1 in overall alcohol-involved injuries and deaths on roadways. It’s also No. 1 for traffic accidents involving 21- to 34-year-old drivers who were drunk.

Using grant money from the state’s Office of Traffic Safety, Santa Maria police are addressing the problems in two ways: stationary checkpoints and mobile “saturation” patrols, in which more than 20 officers scour the city looking for any probable cause to pull a car over.

City officials say the efforts have worked, pointing to a 20 percent drop in hit-and-runs as compared to a year ago.

In a single night in 2008, during a Nov. 16 saturation patrol, the Santa Maria Police Department impounded 147 vehicles from drivers who didn’t have a license. Another patrol in December netted 137 cars from drivers who were unlicensed.

From the start of October 2008 to March 1 of this year, the department impounded 866 vehicles for 30 days each. About 98 percent—848 of them—were impounded from motorists driving without a license. Checkpoints accounted for 159 of the impounded cars. The rest came from saturation patrols.

“If you look at the statistics, where our hit-and-runs have gone down after picking up those cars, I think you can see what a big problem it is,” Patino says.

According to Patino, the city’s unlicensed drivers are to blame for a strange phenomenon: disposable automobiles.

“With the hit-and-runs, usually the guy will hit somebody, jump out of the car, and run. So you have this car that is probably not registered to anyone and certainly isn’t insured,” Patino says. “Your best guess is that the driver doesn’t have a driver’s license, so we’re left with these cars that the only people they’re good for are those people who can dispose of them and don’t have to register or insure them.”

The police department reports that, at least four or five times a week, officers arrive at the scene of an accident only to find both cars empty, ditched by their drivers.

“We see it constantly,” Silva says. “People buy these cars, never get a license, and drive them until they either get caught, or wreck it. Then they just abandon them.”

The same phenomenon leads to about two thirds of city-impounded vehicles never being reclaimed. Ironically, according to Patino, since having a license isn’t a requirement to buy a vehicle at a lien sale, the drivers are free to buy them back when they come up for sale at auction.

Jeremy Thomas is a staff writer for New Times’ sister paper, the Santa Maria Sun. Contact him at jthomas@santamariasun.com.