When it comes to dance, there are basically two types of people: those who only need the slightest hint of a groove to get moving, and those who would rather get a root canal than risk embarrassment on the dance floor. The recently expanded Studio @ might be just the place to bring both ends of the spectrum together.

Four years ago, Ryan Beck opened Studio @ (pronounced Studio “A”), a warm and welcoming space for the passionate prancers and the sheepish strutters alike. Beck had a vision: He knew that everyone has dance lurking somewhere inside of them—he just needed to give them an opportunity to let go of their inhibitions and boogie down. 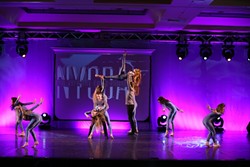 As part of his mission to bring out the dancer in everyone, Beck started a dance class program called Ryan’s American Dance (which, conveniently, has the acronym of RAD). RAD boasts a wide variety of classes—from ballet, to hula, to theater, to hip-hop—designed to speak to anyone even remotely interested in moving their bodies.

Beck said he designs his program load to appeal to as many people as possible. He doesn’t want Studio @ to be the sort of place where people just drop their kids off for class; he wants it to be a place for the entire community to enjoy.

His vision is proving to be successful so far; so many dance fans are clamoring for more classes that he had to open up a second studio space (simply dubbed Studio 2) right across the street just to meet the demand.

Studio 2 could have just been more physical space to meet the growing demand, but Beck seized the opportunity and created the type of dance studio dreams are made of.

He outfitted the 5,200-square-foot space will all the bells and whistles he could: a state-of-the-art sound system, a viewing room, 40 feet of mirrors, and, most importantly, a high-quality professional stage, the size of the stage at the Cuesta Performing Arts Center.

The new space will soon house some snazzy non-dance amenities as well, Beck said. This is all part of his effort to make Studio @ a place for everyone, dancer and non-dancer alike.

“I’m trying to turn it into an all-around athletic/dance playground,” Beck said.

“Being able to do gymnast classes, and yoga stuff, and hopefully aerial sooner than later.”

Though Studio 2 opened in August, Beck decided to wait until Oct. 25—which also happens to be the fourth anniversary of Studio @—to hold its grand opening. He said he wanted to make sure he worked out all the kinks before showing off his shiny new space.

Beck put his heart and soul into the new studio, so he’s pulling out all the stops to make its grand opening as special as possible. On top of tours of the new space, there will be a live music, food and drinks, a free dance class, and even a bounce house. The party will be held at Studio 2 at 279 Tank Farm Road in San Luis Obispo, from 12:30 to 3 p.m. on Saturday, Oct. 25.

Hearing Beck describe his studio is like hearing a new father describe his baby. It’s plain that Beck loves every aspect of the space and has very high hopes for its future. There’s a pure exuberance in Beck’s voice as he fawns over his baby—it’s hard not to get excited right along with him.

“When you step onto that new stage, you just feel grand,” Beck said.

Speaking of grand openings, People’s Self-Help Housing had a grand opening on Oct. 16 for its Courtland Street apartment complex in Arroyo Grande.

The complex features four one-bedroom, 18 two-bedroom, and 14 three-bedroom units as well as a community room with a kitchen and a playground. The housing is intended, and priced, for people who are making 30 to 60 percent of the county’s median income.

The project was approved by AG’s City Council in 2011, and building started in June of 2013. It is one of 45 housing complexes around the Central Coast operated by People’s Self-Help Housing.

For more information about how to apply for housing with People’s Self-Help Housing, or about future projects, call 781-3088.