I recently discovered the phenomenon that is “The IKEA Monkey meme,” thanks to Delaware artist Morgan Hamilton. He dropped the bomb during our very normal interview regarding the upcoming Savages group show slated for Sept. 4 through 30 at Steynberg Gallery. Suddenly, the interview took a left turn into WTF territory. I actually asked him to repeat himself. Had there been a moment of bad reception? You’re painting is an image of what? 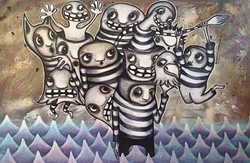 Hamilton explained it all to me: The IKEA Monkey is the nickname given to a Japanese macaque (actually named Darwin) that was found loose in a Canadian IKEA in 2012. The best part? He was wearing a miniature shearling fur coat at the exact moment his picture was taken and plastered across the Internet. Understandably, memes exploded with a ferocity that only a wacky exotic animal sighting can inspire.

Just Google it, and you’ll see what I’m talking about. The toy-like monkey has been Photoshopped into Disney’s The Lion King animation, graced earnest anti-fur campaigns, and has even starred in a fake IKEA advertisement proclaiming: “Sale! Fifty percent off anything with monkey crap on it!” Some memes are funnier than others.

“With the theme of ‘savages,’ I thought it would be great to pose the question, ‘Who is savaging whom?’” Hamilton said with a chuckle. “It’s literally a painting of the IKEA monkey looking out the IKEA sliding glass doors, in oil paint.”

If that doesn’t grab your attention, I don’t know what will.

For this show, it’s apparent that SLO artist and cat wrangler Neal Breton has assembled some of the finest cutting-edge artisans from all walks of life. As usual, there will be a healthy sense of humor involved. 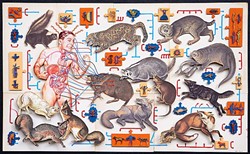 If you’re like me, you’ll be sad to know this marks the final Savages group show series, a gathering that brings together underground and alternative artists rarely seen in downtown galleries. This show will feature high caliber works by a good mix of men and women.

“I’ve always tried to have an even number of women and men in this show. Usually it’s guy heavy, but this year, I recruited really talented female artists from the Bay Area and LA to even the score alongside some of my local favorites,” Breton said.

You may be asking the obvious, “Why is this not happening at The Bunker, Breton’s SLO-based arts collective?” Don’t worry. The Bunker is doing just fine. This show was planned pretty far in advance, back when the art space was just a twinkle in his and partner Jeff Claassen’s eye.

“To me, Steynberg Gallery has always been a beacon of hope in a community where we are drowning in pastels and landscape paintings,” Breton said. “[Owner] Peter Steynberg has never been afraid to be avant garde, thought provoking, and open to different ideas. It has been a goal of mine to work with Peter since arriving here six years ago, and I’m looking forward to the challenge of putting a show together that lives up to his standards.”

SLO resident Adrienne Allebe is one such lady artist who will no doubt up the ante. I caught up with Allebe in her “studio,” aka the tiny garage where she spends countless hours creating, (even on hot days, like the swampy afternoon we met on). Surrounded by coffee mugs filled with a rainbow of colored pencils, the Cal Poly and Cuesta art professor told me she’s always been obsessed with fantasy and sci-fi. 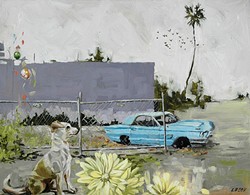 “You must have been one of the cool kids,” I joked. She just laughed and laughed. But who’s having the last laugh now?

Her ghostly work—created with watercolor, pencil, and oil paints—has made a splash in the California and L.A. arts scene. It’s certainly “otherworldly.” Large circular swirls of paint on wood hang on a clean white wall of her studio. I couldn’t stop looking at the vortexes; they seemed to suck me in.

“When I was really young, I was all about drawing dragons, unicorns, and super hero women—aliens and spaceships too,” Allebe said. “There’s always been this interest in fantastic things and weird zones that aren’t identifiable. I’ve never experienced supernatural experiences, but I’ve wanted to my whole life.”

Although her art has evolved to become far more abstract (the smaller, egg-shaped wall hangings she’ll show at Savages are a mix of fluid textures and graphic shapes), she’s still looking to bust out of the black-and-white confines of “real life.”

The artist showed me a trippy work in progress that can only be described as tiger fur on acid plus fetus.

“I think it’s interesting to think of a world beyond ours,” Allebe said. “I like looking at caves and sea creatures—things on earth that do look like fantasy creatures.”

Call them monsters, myths, IKEA monkeys, or just plain savages.  They’ll all be overtaking Steynberg Gallery sooner that you think. More than a dozen artists will unleash their own animal instincts on an unsuspecting public.

“To me, I want to create things that don’t already exist,” Allebe said. “Isn’t that kind of the point?”

Hayley Thomas thinks the “real world” is overrated at hthomas@newtimesslo.com.