Save Cambria's Wise Owl during an April 26 fundraiser!

Editor's note: Unfortunately, the Jessica Fichot concert at the Steynberg Gallery has been cancelled due to illness. She plans to reschedule in the near future. 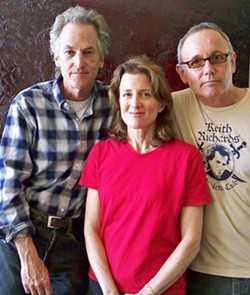 Places for creative people to meet and share their work with art lovers are few and far between, mainly because things like poetry and folk music and arts and crafts aren’t always big moneymakers. SLO Town has Linnaea’s Café and the Steynberg Gallery, which survive mainly due to population size and the need for caffeine, but not all communities—especially smaller ones—manage to support and maintain such venues, which take a lot of hard work and dedication even in SLO.

Cambria’s The Wise Owl is one of those special places devoted to the arts and sustainable living, a place that nurtures creators and art lovers alike, providing a warm and inviting setting and offering healthy and delicious foods.

“This very cool venue is at risk,” wrote Celeste Goyer, Poetry Coordinator for the venue. “The local musicians love The Owl because they feel the audiences listen to them, and the venue owners treat them really well, with love and respect and appreciation. The poets love the venue because our audiences are vocal, loyal, and enthusiastic. The artists who have shown here love it because they actually sell work, and The Owl hosts a meet-and- greet evening with a panel discussion moderated by an art historian. All of this is unheard of, and the community has embraced the spirit of this unique place. However, it’s expensive to put on these programs, and to choose local, organic produce and food products for their kitchen. But they do it because it’s important. These arts programs are in very real danger of being shut down at the end of this month, so The Owl is holding an all-day benefit this Saturday, April 26.” 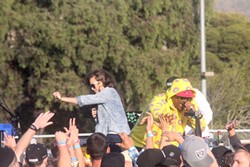 The day opens with an 8 a.m. bake sale, followed by a barbeque ($20) from noon to 4 p.m. From 1 p.m. to midnight, enjoy The Wise Owl Music Fest featuring performances by Bob & Wendy, Café Musique with Jill Knight, Ray Duncan (of Ranchers for Peace), David Plumb, Joe Craven, and many more! There’ll also be a live auction with Jill Turnbow starting at 5:30 p.m.

There’s no cover charge for this event, but all donations—big and small, as well as items for the auction (please deliver by April 25)—will be gratefully accepted. The Wise Owl is located at 2164 Center St. For more info, call 927-8888.

“There is no other venue in Cambria like The Wise Owl,” added Goyer. “They really go out of their way and go to great expense to support local artists, musicians, authors, bodyworkers, organic farmers, food producers, and all kinds of creative local people. It’s coffeehouse culture at its best. It would be a shame for it to close.”

A portion of the proceeds will also benefit Coast Union High School’s art and music departments. Let’s make this happen!

“It’s that time of the year again and our third annual RocknFlow Underground Music Festival is shaping up to be the best day the event has seen yet,” said co-founder James Kaye Miller. “With an undeniably impressive lineup, the festival promises to provide a truly unique experience.” 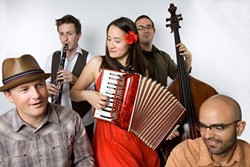 “We will be taking full advantage of the prime of spring, with an afternoon and evening filled with non-stop live music, live art, delicious barbeque prepared on the spot, band booths, and the hydration station known as the beer garden,” Miller added. “Mark your calendars and tell your friends and family that this Saturday is the day we get together to celebrate our culture and community.”

Presale tickets ($15) are available on their website: rocknflowfestival.com. This is an all-ages event.

Return of the chanteuse 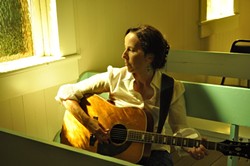 “Los Angeles-based chanteuse/songwriter Jessica Fichot is a lot like her hometown of Paris: French at heart, but with a soul that’s truly international,” her bio claims. “Drawing from her multi-ethnic French, Chinese, and American upbringing, her music fuses styles and languages. Following the acclaimed release of her albums Le Chemin (2007) and Le Secret (2012), she has performed packed venues in France, China, Spain, Mexico, Canada, and across the U.S. In anticipation of the release of a Mandarin-language EP in summer 2014, (this time focusing on songs from Shanghai from the 1940s), she will be touring the West Coast backed by her fiery band.”

Bad news if you planned to see Tom Russell at the SLO Grange Hall on Friday, April 25, but haven’t bought tickets yet: It’s sold out! 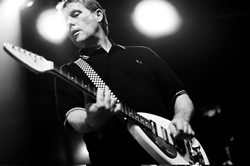 SLOfolks welcomes the return of Rita Hosking and Sean Feder and is also excited to introduce you to Doug Adamz during two shows this weekend: Friday April 25, at Coalesce Bookstore at 7 p.m. (772-2880; $20); and Saturday, April 26, at Castoro Cellars at 7:30 p.m. (238-0725; $20; at Boo Boo’s). Nor-Cal’s Hosking “sings of forest fires, culture clash, demolition derbies, the working class, and hope,” according to press materials. Feder has “three decades of music performance … with a strong penchant towards everything rooted in rhythm.” Adamz “is a masterful guitar player, a soulful singer, and an outrageous harmonica player.” Check it out!

The English Beat pretty much defined my high school and early college years, providing a jumping ska soundtrack for all the crazy shit young people do, from skating to surfing to pogoing in underage clubs. I’m always stoked when they return to SLO Brew for a night of sweaty fun, as they will this Saturday, April 26 (7 p.m.; 21-and-older; $21 presale or $23 at the door). Fronted by Dave Wakeling, the band formed in 1978 in Birmingham. Prepare yourself for an evening of old school hits like “Save it for Later,” “Mirror in the Bathroom,” “Just Can’t Stop It,” “Can’t Get Used to Losing You,” “Hands Off She’s Mine,” “Tears of a Clown/Ranking Full Stop,” “Jeanette,” “I Confess,” “Ackee 1-2-3,” and more! And check out slobrewingco.com for the club’s entire line-up this week.

According to press materials, “Fantuzzi is a near mythical creature whose natural habitat often manifests as a haze of ecstatic dance and joy vibrations at conscious festivals around the globe. Pursuing a journey of ecstatic exploration and a mission to share joy, love, and delight in life with other beings wherever and whenever he can, Fantuzzi’s been a part of the global conscious music community for over 40 years. A unique combination of spiritually inspired mystic rhythms, Latin, reggae, Afro funk, and heart songs, Fantuzzi’s music is sure to elevate your soul and move your body!” Jeesh! Sounds pretty good! Check him out on Saturday, April 26, at the Steynberg Gallery (7:30 p.m.; $15 donation). 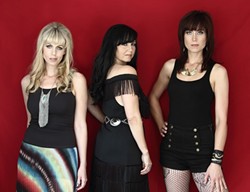