For updates on next year's competition and
more information on the SLO Wedding Games,
visit the event's Facebook page.

The competition was stiff on the second weekend in February, and I'm not talking about the 2018 Olympic Winter Games. Ten teams, made up of roughly 10 players each, gathered at the Dana Powers House and Barn in Nipomo on Feb. 11 to compete in the very first SLO Wedding Games.

The event was conceived by wedding photographer Lindsay Long, who pitched the concept to her friend and fellow photographer Patrick Ang. The idea was to have a friendly, Olympic style competition between Central Coast wedding vendors.

"I loved the idea and just went with it," Ang said, who co-hosted the Wedding Games with Bottles and Ice Bar Service, Sidaris Communications, Seaglass Events, and Golden Sage Events. Rather than pit every business against one another, teams are divided by occupation (a team for photographers, a team for DJs, a team for caterers, a team for coordinators, etc.).

"We came up with a bunch of wedding-related games that reflect stuff we face every wedding we work," Ang said.

One such game is the Aisle Gauntlet, he explained. The goal of the game is to get across an aisle full of obstacles the fastest. 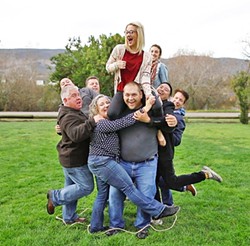 "We face wedding aisles where guests have selfie sticks that block our views when taking photos of the ceremony," Ang said. "So for the Aisle Gauntlet, the opposing teams used selfie sticks to hit the runners with to slow them down."

Not real selfie sticks, Ang assured me. Just symbolic selfie sticks (the runners were hit with pool noodles). Another photography-inspired game is the Family Portrait, where the goal is to fit your entire team into the smallest circle possible (like fitting the whole family in a single photo, get it?).

Being metaphorical isn't a requirement of the Wedding Games however—Pin the Boutonniere on the Groom is just a fun spin on Pin the Tail on the Donkey, and the competition wouldn't be complete without a wedding cake eating contest.

Other games included the Ultimate Bouquet Toss, where the bride's bouquet is catapulted from a giant slingshot, and the Styled Shoot, where one team member must set up and decorate a reception table blindfolded (guided only by verbal instructions from the rest of the team).

Silly challenges aside, coming together for a good cause was more prevalent on players' minds than winning, Ang believes. With donations from the players and spectators of the event, the Wedding Games managed to raise more than $2,000 for the United Way Thomas Fire Fund.

Tim Lopez, DJ and owner of Modern Symphony Entertainment, served as one of the competition's judges and is confident the event will become a yearly tradition due to the people involved, he said.

"The wedding community is pretty close, we all know each other pretty well around here. The competition between different companies to snag weddings isn't as cutthroat as you would think," Lopez said. "People from all over come to the Central Coast to get married, so there's more than enough to go around. It's not just that though, we're all just good friends regardless."

This real-world camaraderie, Lopez added, might not have been obvious to the Wedding Games' audience however.

"There was definitely a lot of trash talking going on, but it was all in good fun," Lopez said. "We're like a big family to be honest, and what family doesn't talk trash?" Δ

Calendar Editor Caleb Wiseblood would have totally won that cake-eating contest. Contact him at cwiseblood@newtimesslo.com.