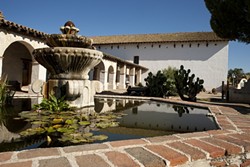 Sunset’s upcoming Savor the Central Coast food and wine tasting event features wineries, restaurants, and farms that hail from Santa Cruz to Ventura. And every business involved, no matter how small or large, will benefit from the exposure to this popular magazine’s broad readership. With Santa Margarita Ranch as the primary location for the main events, however, Savor’s focus on the Paso Robles and Edna Valley wine regions will make them the stars of the show.

“We considered other wine regions when planning this event, but the Central Coast was at the top of our list,” said Sunset wine editor, Sara Schneider. “There’s been so much growth in Paso Robles. We love the place: its winemakers, chefs, and growers. We wanted to bring our audience out to discover them.”

On Saturday and Sunday, Oct. 2 and 3, at the Santa Margarita Ranch, Schneider will lead three wine tasting seminars: She’ll moderate a panel of winemakers and vintners who make the distinct, different wines of Paso Robles; she’ll attend a hands-on winemaking session where guests will learn the art of creating the perfect cuvée (blend) of Pinot Noir grown in Edna Valley; and she’ll appear with Riedel Glassworks representative Sylvie Laly to prove drinking wine out of the right glass really does enhance its flavor and your enjoyment of it. Participants of the last seminar get to take the glasses home. Each of these hour-long seminars costs $15 to attend, in addition to the main event entry fee of $85 per person.

“Wine was our motivation for creating this event down on the Central Coast,” Schneider said.

She explained that, as a wine editor, she provides wine coverage for the readers who are not all wine connoisseurs: “We bring more of a lifestyle context to wine. For Savor, we wanted to offer both expensive and value-priced wines to make them more affordable for everyone.”

According to Stacie Jacob, executive director of the Paso Robles Wine Country Alliance (PRWCA), any wine tasted during Savor’s events can be purchased at the Central Coast Pavilion Tent. Savor made arrangements with 15 Degrees C and Wine County Pack and Ship to sell and ship wine purchases directly to people’s homes. That makes it much more convenient to buy wine and not have to pack it for traveling.

“The PRWCA will have a strong presence in the Central Coast Pavilion tent, which features a marketplace,” Jacob said, “and we’ll have a blind tasting bar so you don’t know which wine you’re trying. We’ll also have shirts, hats, and games that give you a chance to win $20 to buy wine.”

During the planning stages, Schneider said they had discussed pouring six wines at the Paso Robles wine seminar, but realized eight would provide a better sampling of what’s distinct and different: “We chose Vina Robles White because it’s not a Rhone blend; it’s a blend of four white varieties from Italy, Spain, Bordeaux, and the Rhone. That breaks the rules.”

They also chose Adelaida Version because it’s a traditional Rhone white blend of Roussanne and Grenache Blanc. Schneider laughed while admitting she wanted Halter Ranch Rosé (now sold out) because she enjoyed it at Artisan with an abalone appetizer.

“We wanted to cover some of the original varieties like Cabernet and Zinfandel, so we chose Ancient Peaks Zinfandel, which is grown on the ranch,” Schneider recalled of some red wines they selected. “We chose J. Lohr Hilltop Cabernet, which is only $35, to show that this region delivers a lot of value for the price. The Tablas Creek Esprit de Beaucastel gives everyone a taste of the type of blend that’s made in Chateauneuf-du-Pape.”

For details on seminars and prices at Savor the Central Coast, call 1-800-768-6653; visit savorcentralcoast.com; become a fan on Facebook at SavorCC; or follow them on Twitter at SavorCC. Ticket proceeds and sponsorships are considered donations to the San Luis Obispo County Visitors and Conference Bureau, a nonprofit tourism organization promoting SLO County.

Jacob finished by reminding everyone about the shuttles to these wine events: “Locals understand the importance of using designated drivers, and Sunset is providing free transportation from cities all over the county. We need to get the word out to visitors to take advantage of the free ride and leave the driving to them.” ∆

You can reach New Times’ Cuisine columnist at khardesty@newtimesslo.com.om.