For more festival details or to purchase tickets to Salute to Scarecrows! A Starlit Celebration of Cambria on Oct. 30 from 6 to 8 p.m., visit cambriascarecrows.com. Follow the event organizers on Facebook @cambriascarecrows.

The picturesque town of Cambria, with fewer than 6,000 residents, will see its population explode in October. Tens of thousands of tourists—and 400 scarecrows—will descend upon the seaside village starting Oct. 1 to partake in its 13th annual Scarecrow Festival, culminating in a culinary feast at Cambria Nursery and Florist on Oct. 30.

Salute to Scarecrows! A Starlit Celebration of Cambria will feature fare from an exclusive sampling of Cambria's 30-plus restaurants, according to Paulla Ufferheide, president of the Cambria Scarecrow Festival. 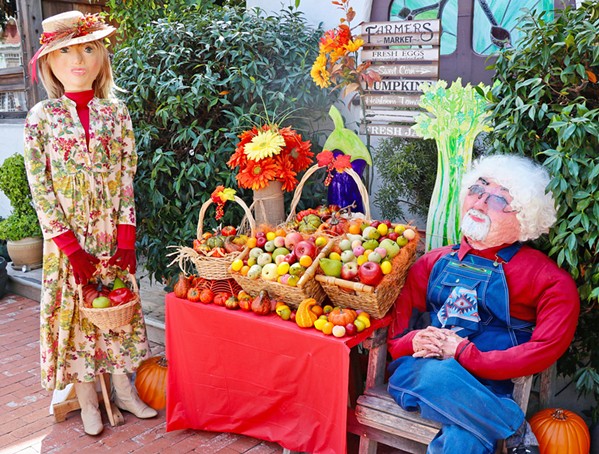 The festival debuted in 2009 with 30 scarecrows, Ufferheide explained. It expanded from a one-weekend event at the Cambria Historical Museum to this year's month-long extravaganza encompassing the entire town—and even the neighboring villages of San Simeon and Harmony.

The Oct. 30 event finale—for which masks are encouraged, as well as COVID-19 vaccination, and distancing by volunteers and guests—serves a dual purpose of providing a safe night of outdoor entertainment, while benefiting Cambria Scarecrow Festival, a registered charitable organization. Tickets are limited to 150 and can be purchased via its website. An additional 50 tickets will be provided to sponsors.

"The festival came about because October was a very slow month for businesses in Cambria," Ufferheide said. "Now the businesses tell us that October is one of the busiest months of the year for them. We have heard from hoteliers that say they are already booked up in October."

Established in 1985, Robin's is one of the oldest, most highly rated restaurants in Cambria. At the Oct. 30 event, the eatery will be dishing up pumpkin-apple samosas spiced with garam masala and mint chutney.

Patrons visiting the restaurant throughout October can enjoy its seasonal dessert specialty—pumpkin cheesecake with pepita brittle.

"We look forward to participating in the annual Scarecrow Festival once again because it brings smiles and joy to our locals and visitors," Covey said. "The creativity that arises from this festival is amazing, and it's so much fun to see what has been cooked up in the minds and hands of our local artists."

Another landmark Cambria restaurant, Moonstone Beach Bar & Grill, will be dishing up its iconic house-made New England-style clam chowder at the event.

In business since 1993, Moonstone's boasts a "tried-and-true, seafood-inspired menu," according to proprietor John MacKinnon. While the chowder is definitely a fan favorite, "we like to call every dish a signature dish," he said. "They've been honed over the past 28 years."

More than half of the menu features fresh seafood, but steak, chicken, burgers, sandwiches, and vegetarian options abound as well.

Last year, in response to the pandemic, the eatery consolidated its most popular lunch and dinner options onto a single menu, which MacKinnon says benefits the restaurant, but also appeals to guests.

However, he adds, the restaurant's biggest draw remains its idyllic setting.

"Our restaurant has an unbeatable view of the Pacific and Moonstone Beach from our patio," he said.

Among the beverage providers on hand at the Oct. 30 event will be Cutruzzola Vineyards, co-owned by Lisa Miller and Francis Cutruzzola.

The tasting room, located in downtown Cambria, is currently open Wednesday to Sunday by appointment only. 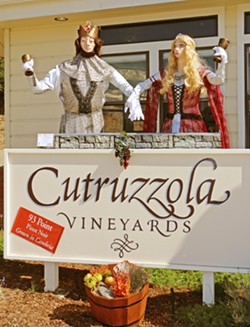 "We do two releases to our wine club each year in April and October," Miller said. "We chose October for our fall release in part due to the Scarecrow Festival. The Scarecrow Festival is a terrific event, bringing visitors from outside the area into Cambria but also locals from other towns in SLO County."

Festival President Ufferheide concurred: "We here in scarecrow-land are very excited about this year's festival, which is just around the corner."

Visitors can enjoy scarecrow displays at their leisure throughout the month. They will be lining the streets at ground level "as well as flying high above," she said. "Keep your eyes open to see one of our old favorites that will be coming back to Cambria this year," she added. "It's a surprise."

She also has high hopes for the gala celebration, which promises a "tasty and whimsical" conclusion.

Generously spray or butter—or place a nonstick mat on—a large baking sheet. In a saucepan, melt butter on low heat and add salt, pumpkin spice, vanilla, and pepita seeds to evenly coat the seeds with butter mixture. Keep stove on the lowest heat, stirring occasionally so seeds don't burn. Add sugar to a heavy skillet on medium heat. Stir sugar constantly with a rubber spatula, scraping the skillet bottom as you stir. The sugar will combine into clumps before melting into an amber syrup. As the last lumps melt into the syrup, remove the skillet from heat. With the spatula, add the syrup to the seed mixture. Working quickly, pour the syrup/seed mixture onto the baking sheet. Cool completely and break into pieces to garnish your fall desserts. Store in an airtight container. Brittle will last for two weeks.

Combine ingredients in a sealed container, and shake before use. Save the remainder until spring for "some powerful pumpkin spice" for fall and winter desserts, according to Robin's Restaurant pastry chef Jake Schoomaker. Δ

Flavor Writer Cherish Whyte plans to make Robin's Pepita Brittle and doubts there will be leftovers. Reach her at cwhyte@newtimesslo.com.