As part of the Scared Scriptless tour, improv comedians Colin Mochrie and Brad Sherwood will be performing at the Harold Miossi Hall at the Performing Arts Center in San Luis Obispo on Oct. 16 and the Granada Theatre in Santa Barbara on Oct. 30. Visit colinandbradshow.com for tickets and more info.

Over a span of 40 years working in live improv, only one audience member ever came close to rubbing comedian Colin Mochrie the wrong way. 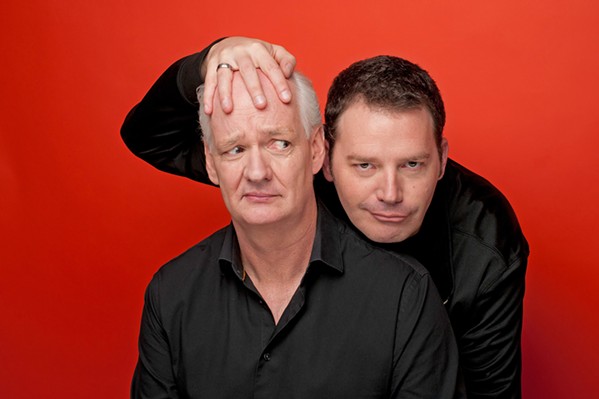 Still, Mochrie—best known for his work on Whose Line Is It Anyway?—said there has never been a time he regretted asking someone to join him on stage for an interactive improv routine.

"It always amazes me, first of all, that they actually come up [on stage]. And they usually give us everything that we want," Mochrie said. "Even if they seem a little nervous, or, you know, shy at the beginning, by the end of the scene, they've given us everything we want."

Attendees of this year's Scared Scriptless tour, co-hosted by Mochrie and comedy partner Brad Sherwood (also a Whose Line regular), are at risk of being chosen to participate in a variety of improv shenanigans. The tour includes two upcoming stops along the Central Coast: the Harold Miossi Hall at the Performing Arts Center in San Luis Obispo on Oct. 16 and the Granada Theatre in Santa Barbara on Oct. 30.

Between the two cities, Mochrie said he's more familiar with Santa Barbara, where he'd often come for a day trip while living in Los Angeles, but both he and Sherwood have been to San Luis Obispo a handful of times.

"I remember San Luis Obispo for one main reason. It may not be something to advertise, but Brad and I have done at least two or three shows there over the years—and we have yet to fly out of the airport," Mochrie said. "We get in OK, and then we can never get out because there's fog or something, so we always end up renting a car and driving to Los Angeles. So we're hoping that this time, we can actually fly out."

Besides the Whose Line fame and a mutual affinity for Oprah Winfrey's favorite town, another thing Mochrie and Sherwood have in common is the career path they both originally considered before becoming comedians.

"I'm still shocked that the improv thing worked. When I look back and think my two options were improviser or marine biologist, those aren't your big-buck jobs. But it all worked out," Mochrie said, who credited the '60s Flipper show for nurturing his interest in dolphins specifically.

"Oddly it was the same with Brad, he also wanted to be a marine biologist."

Fate had other plans for both comics, who are currently celebrating their 20th anniversary as touring partners. Despite their aforementioned similarities, their differences play an even bigger role in keeping the show going, Mochrie explained.

"We have certain skills that we bring to the relationship. He is very detail oriented—one may say, anally so," Mochrie said. "Which is good because he takes care of the things that I would never think of—everything from, you know, the little things to lighting on stage.

"And I'm there basically to make sure that he doesn't have a stroke."

For those who can't make it to Scared Scriptless, they can still catch Mochrie on the 18th season of Whose Line, alongside longtime co-stars Wayne Brady and Ryan Stiles. The new season premiered on Oct. 9 and is currently airing on the CW.

The only time Mochrie watches the show himself though is if he catches it mid-channel surfing.

"I tend not to watch the shows. If I'm flipping through the channels and see it, I'll watch and go, 'Wow, that's embarrassing,'" Mochrie said. "It's interesting to watch because I have no recollection of any of the scenes—maybe a couple here and there because of different reasons. But it's usually like I'm watching something I've never seen before." Δ

Calendar Editor Caleb Wiseblood couldn't improvise even if his life depended on it. Send comments to cwiseblood@newtimesslo.com.