Explore red from a cultural, historical, and physiological perspective--as seen by the artists of the Really, Really Red Show

Atahuallpa, the 13th and last emperor of the dazzling Inca empire, was strangled to death by Francisco Pizarro’s Spanish conquistadors. Artist Lynn Kishiyama informed me of this. He was killed, she explained, despite his supplying the Spanish with 24 tons of gold and silver—“the richest ransom in the history of the world.”

“They were looking for gold and silver,” continued Kishiyama, whose mixed-media/collage artwork makes up half of the collaborative “Really, Really Red Show” at Paso Robles’ Studios on the Park.

The Incas, of course, didn’t place nearly the same value on these metals as did the Spanish, and they didn’t think much of the Europeans’ quest. Gold to them wasn’t worth fighting for, but red was another story.

“What they really ended up stealing,” the artist went on, holding up her thumb and index finger, “were these tiny little bugs that were about this big.”

The Spanish took tens of thousands of the cochineal parasite, from which the red dye carmine is derived. (Approximately 70,000 insects make a pound of cochineal dye.) The year Atahuallpa was executed—1532—marked the extermination a 300-year civilization, but also paved the way for the introduction of the color red to the European art and fashion world. 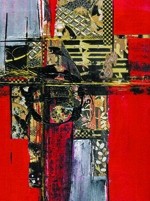 Before the 1530s, even Rembrandt didn’t have red paint. Roman warriors, Russia’s Imperial Guard, and Britain’s Redcoats wouldn’t have had the color either, were it not for Pizarro’s murderous quest for gold. These days, individual paint companies may have different red formulas, but they share a common ancestry, Kishiyama pointed out.

Around 500 years later, Kishiyama’s readings on the sometimes-bloody history of her favorite color would inspire a piece titled The Last Emperor Atahuallpa.  It’s the signature work of “The Really, Really Red Show,” a collaboration with plein air painter Penelope Letz.

Both Letz and Kishiyama seem to have an abnormal love of color.

“I could look at paint chips all day,” Letz claims in her artist’s bio. And sometimes she does: “When I first started painting for this show,” she said, “I got all my red tubes of paint out and I made a color board with every single red, and I wrote down what pigment was in each one, and I would mix them with white, or with other colors to make tones and shades. You have to be aware of what’s in your paint.”

Lentz, who favors landscapes, was trained to paint colors as they appear in nature, rather than choosing her own color scheme. Thus, she had difficulty creating a totally red painting. The natural red rock formations of a spot called Alabama Hills were one exception, however, as was the reddish hue of several local farmhouses.

Kishiyama, whose work is largely abstract, may have had an easier time abiding by the theme. After moving back to California from Japan, where she got her start as an artist, she continued the technique she had developed of creating collages with Japanese washi paper.

“What happens to the human body when its owner walks into a room full of red?” New Times asked.

“It excites the viewer,” Lentz said.

“It makes you hungry,” Kishiyama added—which explains why red dominates the color scheme of every fast-food chain you can think of. “The color red stimulates the human nervous system,” reads a fact sheet hanging in the studio, pulled from a book called A Perfect Red, “making our eyes dilate and our hearts beat faster.”

Kishiyama’s signature piece, The Last Emperor Atahuallpa, resembles a totem, with a red pillar in the center flanked by two slimmer pillars, signifying Atahuallpa and his two loyal warriors. Tufts of hair from the artist’s small herd of alpaca—native to Peru, like the Inca—puff up at one end.

Different cultures assign different meanings to colors, Kishiyama said, quoting A Perfect Red, but red is a constant, its meaning universally interpreted as the color of passion, heat, and excitement. Often associated with love, red’s past is gorier than you might expect.

Historically, red has also been valued more than life, I am informed: Spanish law invoked the death penalty against foreigners smuggling the dye they’d rightfully stolen in 1532, when red spilled gratuitously from the veins of thousands of Incas.