School site shuffle: Parents, teachers push back as the Paso Robles school district talks about closing one school and moving students to another

Living just outside the Paso Robles Joint Unified School District (PRJUSD) limits, David and his wife are preoccupied with selecting the right school district for their eighth grader to enroll in next year for high school. The Paso school district seems like the obvious choice in terms of location, but its recent spate of controversies is making David think again.

"They would need to show that they are treating all students equally with respect, that they're listening to the voices of all the students and parents there are, not just what fits their narrative. It's clear that the board members have already made their decision," said David, who requested his last name be kept anonymous.

The decision David's referring to is about the possible closure of Georgia Brown Elementary School. Though community members expected PRJUSD board members to make the final call by the end of the year, school officials told New Times that the deadline was extended to February 2022.

District officials called the transitional K-5 Georgia Brown Elementary "one of the shining stars of the district" because of its dual-immersion program, which draws students from all over the county because it's a magnet school. But the fact that the school board is considering whether to close Georgia Brown and transfer the dual-immersion program to another site has sparked outrage as residents think it will negatively impact numerous students from the lower-income and Spanish-speaking populations it serves.

One of the options that district Superintendent Curt Dubost mentioned at a Nov. 10 meeting with parents was closing the elementary site and swapping locations with Glen Speck Middle School, which is currently operating at a temporary site due to construction on the original campus. Community members like Yessenia Echevarria think that while the spotlight is on Georgia Brown, problems faced by Glen Speck are being overlooked.

"The Glen Speck families are going to be hurt the most. The issue boils down to the ethics behind the Measure M bond. That bond was implemented with the intention to renovate the two oldest school sites: Glen Speck and Georgia Brown," said Echevarria, founder of Mujeres de Acción and a co-founder of Paso People's Action.

Worth $95 million, the Measure M bond passed in 2016. Five years later, that sum has dwindled to $5 million in spendable dollars and $25 million in bonds that can be sold. About $13.8 million of the original amount was reserved to reconstruct Georgia Brown, but at the Nov. 10 meeting, Dubost said such a project wasn't feasible.

"There simply isn't enough money to complete the Georgia Brown project, as envisioned, and there frankly never was; $13 million is about what the recently completed Marie Bauer facility cost and that was for 10 classrooms, not an entire elementary school," Dubost said.

He added that the school board received recommendations from the 7/11 Advisory Committee that Georgia Brown be shuttered and declared a surplus property to alleviate PRJUSD's financial problems stemming from declining student enrollment. Echevarria said that the 7/11 committee didn't fully represent community concerns because none of the appointed members are Latino.

"We cannot make a race test to apply for it. That would be illegal. My heart is right there with them, but they must apply," Bausch said. "There is a current opening on the school board that is not based on race. Who will apply?" 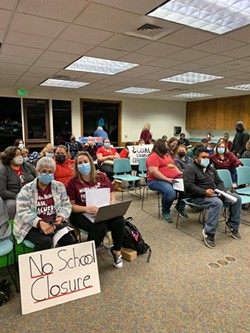 Bausch also doesn't agree with either of the board's alternatives if Georgia Brown is closed. The first option involves moving the dual-immersion program to Winifred Pifer Elementary School. But PRJUSD's lack of an efficient bus system would make it tougher for the displaced Georgia Brown Elementary students from lower-income families to travel to Winifred Pifer, which is 4 miles away.

"Option 1 unfairly benefits those students on the east side by disproportionately impacting Georgia Brown students," Bausch said. "I hadn't heard about moving the dual-immersion project to Pifer until the boundaries/closure meeting on Nov 10. It was a surprise."

The second option—Glen Speck swapping sites—caused public outcry for a variety of reasons. Bausch said that Glen Speck students and staff were already moved to a temporary site that was only supposed to be used for one year while Measure M funds were used to revamp a building for the middle school. But the ongoing construction is now on its third year and has cost the district $1.5 million annually.

"That money, which was is used to rent portables, could have been used to build new classrooms. If the board moves the dual-immersion program to Speck: one, Speck is not big enough, and two, Speck students will have to stay at the temporary campus another two to three years while Georgia Brown is rebuilt. Built in 1947, most buildings in Georgia Brown are not salvageable. There are holes and allegedly asbestos," Bausch said.

He added that about six years ago, Glen Speck Middle was supposed to become a visual and performing arts magnet school. Measure M funds were even used to buy musical instruments, but he said their whereabouts are currently unknown.

During the Nov. 10 meeting, Bausch offered a possible solution: consolidate Flamson and Lewis middle schools at Lewis' site, and let Georgia Brown Elementary move into the vacated Flamson site. This new site could be expanded to a K-8 dual-immersion school. He added that the school district would even have $9 million left over with this plan, which could be used to build the desired aquatic complex.

"The community won't lose their dual-immersion program or their neighborhood school, and all of the students on the west side of Paso won't be relocated to other sites, they're just being moved up the street a few blocks. The program will keep its integrity from [kindergarten] all the way through eighth grade," Usilton said. "If they do a K-8 program, their field of biliteracy will hold more valor because it would be a true program all the way through eighth grade and they would have higher credentials."

Under this option, Bausch said, some teachers recommended that the vacant Georgia Brown site could then become workforce housing to attract and retain teachers, especially those fresh out of college.

His recommendation ultimately wasn't considered at the meeting. Theresa Braden, executive secretary to the superintendent, told New Times that it was dropped because it wasn't popular with the Grade Span Configuration Committee or with parents.

The school closure issue is not the only dilemma PRJUSD is facing. It came under fire recently when some students from Paso Robles High School destroyed a Pride flag, and the day before Veterans Day, several members of the high school's conservative club displayed anti-Biden flags on campus.

"Just driving by the high school, how am I supposed to respond as a parent to say, 'Yeah, that's your high school that you're going to, son'?" David said. "He's already stated that it doesn't appear to be welcoming because there's a flag there that says 'fuck Biden.'" Δ