Work from home, shelter at home, home schooling—it all means something different for those who don't have homes to stay in.

In the six months since COVID-19 became a real concern on the Central Coast, a lot has changed at the Good Samaritan Shelter in Santa Maria. In normal times, the nonprofit only opens its main shelters at night, but since Gov. Gavin Newsom issued a stay-at-home order on March 19, its shelters have been operating 24/7.

Alexis Nshamamba, a quality assurance and training manager at Good Sam, said there's always been a large population of homeless families using Good Sam's programs and shelters in Santa Maria in particular. But families who would normally leave the shelter during the day for school or work are now living at the shelter all day long.

At Good Sam's main congregate shelters, Nshamamba said there isn't really adequate space for kids to work privately throughout the day. But the nonprofit is doing what it can to make things work.

When schools closed in March, Good Sam expanded its usual after-school program to run all day and hired additional staff to help students with schoolwork. The Santa Maria shelter already has a classroom space on-site for its after-school program, but Nshamamba said it's small and, even with the newly installed dividers, it doesn't offer a lot of privacy from other students. Some kids work outside or in a small office when in need of alone time.

"We try to put them where there aren't too many distractions," Nshamamba told New Times, "but it's inevitable."

Despite best efforts, things can get hectic. High school students listening in on history or math lessons are working alongside younger students who might be doing jumping jacks during gym class or playing trombone for band.

"It's hard," Nshamamba said. "I think it's really hard as it is to be homeless and be school age, but now you don't have any outlet."

Between the various school districts in Santa Maria and San Luis Obispo County, there are thousands of kids who are considered to be homeless. Most school districts define "homelessness" as lacking a "fixed, regular, and adequate nighttime residence," which includes kids whose families live in hotels, campgrounds, shelters, cars, and even those who share housing with other families due to financial constraints.

Between Santa Maria's two public school districts, there are more than 6,000 students living in these conditions, according to data provided by the districts. There are 761 homeless students currently attending the Lucia Mar Unified School District, more than 500 in San Luis Coastal, and another 200 in the Paso Robles Joint Unified School District.

For these kids, who often don't know where they'll sleep or when they'll eat next, school is a much-needed constant. Now educators and homeless advocates are doing what they can to keep these students connected and in class amid COVID-19.

It's not just the kids in homeless shelters who are struggling, according to Maggie White, a spokesperson for the Santa Maria-Bonita School District. When the district started giving out school supplies and Chromebooks to students in the spring, White said the district made sure to include earbuds for those without a quiet space to work in their homes. Some schools in the district sent supplies home in banker boxes so that kids could use those as desks, if necessary, and the district has heard concerns from teachers with students who refuse to turn on their cameras while in class because they don't want anyone to see where they're living.

"Some kids don't have a space," White said.

Despite the hundreds of students considered to be homeless in SLO County, there aren't many children living in the county's homeless shelters. There were only four families with school-aged kids living at 40 Prado Homeless Services Center in San Luis Obispo as of Sept. 17, according to Grace McIntosh, deputy director of CAPSLO, the organization that runs 40 Prado.

Initially McIntosh said staff roped off the shelter's dining room for kids to use as a makeshift classroom, but the families ultimately decided it was too distracting to have other kids nearby. Families living at 40 Prado all have separate rooms to stay in, and although small, parents decided those dorms would be the best place for their kids to work.

Unlike the Good Sam shelter, 40 Prado doesn't have the staff or resources necessary to help kids navigate online learning, so McIntosh said that much is really left up to the parents. That's how it would be if they were living anywhere else.

That's part of the problem with the distance-learning model, according to Nate Maas, director of Student Services at Paso Robles Joint Unified School District: It's up to the parents. Kids in the foster system or those whose parents work full-time jobs, don't have steady housing, or have multiple young kids to look after are easy to lose track of, Maas said.

"Sometimes we have families that kind of fall off the radar for a while," he told New Times. 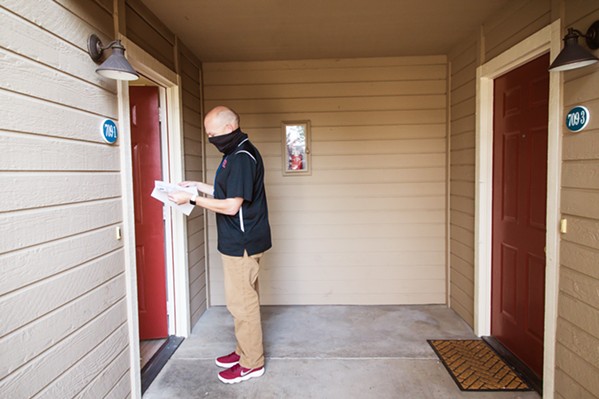 So Paso Unified put together a team of about 30 employees who track down the district's most vulnerable students and get them whatever they need to successfully attend school online. The team consists of Paso's Student Services department, employees who normally handle issues of enrollment and attendance, and several other "repurposed" employees, like school resource officers and campus aids, whose usual jobs are on hold thanks to coronavirus.

The team meets weekly, Maas said, to assess student success and participation. They identify the most vulnerable students—usually kids who are homeless, in the foster system, or have special needs—and they check up on those students more often than general students. When there are students identified who aren't coming to class and can't be contacted virtually, Maas said teams of two staff members will literally knock on doors to try to locate them and find out what's going on.

They talk to neighbors, they leave cards, and they help connect families with necessary resources.

In a lot of cases, families leave town without telling the district, either for a vacation or to take care of an emergency. Oftentimes they forget their kids' Chromebooks or can't find Wi-Fi while they're away. In those situations, Maas said the district does what it can to get kids back online for school.

"Basically our primary purpose is that we want to see kids be successful," he said.

And staff, according to Maas, have really stepped up. Teachers are working overtime, employees are volunteering to go out and find disconnected kids in the middle of a pandemic, and everyone is doing what they can to ensure kids are doing OK.

But for the most vulnerable, distance learning will never stand up to the benefits offered by in-person learning.

"I see so many people working so hard," Maas said. "It's just that the task is a monumental one." Δ