Scootin' around the Central Coast: Scooties Inc. in Grover Beach can rent you wheels

As a coastal local, you’ve probably seen it before: Tourists riding around on every dorky kind of bicycle imaginable, from the ones that can seat your whole family to the ones that you can ride on the beach while lying down. Maybe you find a few Segways among them as well. However, now there’s a new kind of rentable vehicle that both tourists and locals can ride in style.

Scooties Inc. is a brand new electric scooter shop in Grover Beach that opened its doors on Dec. 30. It’s owned and was started by Grover Beach resident Kevin Majors, with some help from his father, Bill Majors. Bill describes his position in the company as “just doing some marketing for him,” and said that Kevin was inspired to get into the electric scooter business because they’re good for the environment. 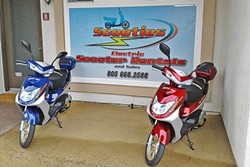 “We’ve just got one model right now,” Bill said. “It’s a single rider called an X-Treme 504. They’re very hard to find. We had to import them from China. No one makes them in the United States.”

The X-Treme 504 can go up to 20 miles per hour and does not require a driver’s license to operate. Scooties rents them out for one or two hours at a time, which is approximately how long a single charge lasts. They likely won’t be Scooties’ vehicle of choice forever, however, as Bill said they have plans to acquire factories to generate electric scooters.

“We’re hoping to eventually build our own [scooters],” he said. “That’s our goal.”

That’s not the only way Scooties intends to expand, either. Bill also said that they’re working on taking their business nationwide.

“We’re working with a company in San Diego that does that,” he said. “It’ll probably be about six months. This is really the pilot store, working out the kinks and everything.”

In the meantime, Scooties has a mobile unit in addition to its main store. Scooters can be rented directly from the mobile unit, so having it allows them to drive to various locations and find customers they otherwise might not have had.

Though they expect most of their clients to be tourists, they not only want to rent and sell to locals as well, but also take part in community activities. The hope is to someday rent for special events, including some that would benefit local high schools. Regardless of who they reach though, Bill believes his son’s vision is the future.

“Everyone is getting away from gasoline and moving to electric,” he said.

Scooties can be found at 346 West Grand Ave. in Grover Beach. It costs $40 to rent a scooter for one hour and $70 to rent one for two hours.

• RISE received $5,000 in merchandise from New Balance Athletics for its clients, who are often victims of physical and mental abuse, in time for the winter season. Ally Carda, assistant softball coach at Cal Poly and a New Balance sponsored player on the USA Softball Women’s National Team, selected RISE to receive the donation. RISE used the funds to purchase athletic and outdoor wear for 14 shelter and case management families.

• People’s Self-Help Housing will be breaking ground on an affordable housing project Jan. 13 in Templeton, bringing 30 housing units to the community upon completion. Rolling Hills II is expected to be finished in 2018 and will serve households earning up to 60 percent of the area’s median income, and rents will be based on 30 percent of the tenants’ income. It’s the second phase of an existing affordable apartment complex.