In an attempt to revitalize the sport of rugby in San Luis Obispo, Director of Rugby for the San Luis Obispo Rugby Club Reggie Greenwood is reaching out to a younger generation of kids, and giving them a chance to play “the game they play in heaven.” 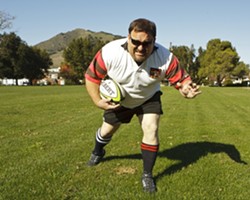 Greenwood and his volunteer staff are offering youth rugby at three different age brackets this year: 8-12, 12-14, and 14-19 year-olds. Coach Greenwood is inviting all youth in the county to play, regardless of their abilities or financial status.

Greenwood said that the sport of rugby has a lot to offer the youth of the community because of the way the game is played. “There are a lot of life philosophies that go in with rugby. The number one way to succeed in rugby is to not do the easy thing. Usually the easy thing is illegal. There is always chivalry being practiced, there is always honor being practiced,” Greenwood said.

The 8-12 year-old age bracket is the newest addition to the youth rugby league in San Luis Obispo, and Greenwood feels that it plays a crucial role in solidifying a lifelong commitment to the sport. The game is played with touch rules and Greenwood encourages parents to come out to the practices and play with their kids.

“The union really wants us to encourage these 8 to 12 year-olds to start handling the ball. The pressure is on us to show success in the program in order to instill it in the P.E. program in the elementary school, junior high, and high school. That is one of the directions we are trying to take it,” Greenwood said.

The SLO youth rugby coaching system is different from most because of the fact that it relies on a mentor system. “The junior high kids take the young ones underneath their wings and the high school kids take the junior high kids under their wings. It’s more of a peer teaching program. They pay much more attention to someone they emulate and idolize who is just a little more old than them. That makes a whole lot of difference. There is a sound philosophy all the way down,” Greenwood explained.

The mentor coaching system has proved to be very effective and so far six schools in Fresno have adopted the coaching method as their own.

If the safety of your child is a concern given the rough image the sport of rugby has, Greenwood has some surprising statistics for you. He states that according to national injury statistics there is a much higher occurrence of injuries within cheerleading and girls’ soccer than there is in rugby, making this alternative sport a healthy option for your kid.

In 2016 rugby becomes an Olympic sport, and Greenwood wants his players to be a part of the action. “We are training tomorrow’s Olympic athletes. I have 40 kids in high school that are all about this.”

The youth rugby league is a facet of the San Luis Obispo Rugby Club, a non-profit 501(c)(3) organization that is able to accept donations to offset the costs for underprivileged youth in the county. Practices start the first week of January and the opening game is on Feb. 4. Visit slorugby.org or send an email to SLOYouthRugby@gmail.com for more information.

If self-edu-ma-cation is on your list of New Year’s resolutions, check out what the City of Atascadero’s Community Services Department has to offer. A number of join-anytime classes are already underway, covering such topics as mural painting, ballroom dancing, Spanish language, zumba toning, dog obedience, and too many more to list here. To find the full list of offerings, including days, times, and costs, call 461-5000, or visit atascadero.org.