Scrutiny continues for Coastal Commission after board fired its top staffer

by Jono Kinkade and Chris McGuinness

In the wake of the high profile, contentious firing of California Coastal Commission Executive Director Charles Lester on Feb. 10, lawyers, journalists, and environmentalists continue their post-mortem to try and shed light on what motivated the decision.

But for now the specific reasons behind the commission’s 7-5 vote to dismiss Lester remain a mystery—commissioners discussed the issue in closed session because of the personnel nature. Commissioners publicly cited problems with Lester’s communication and management performance. 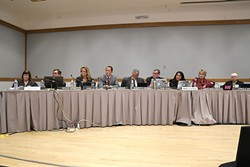 Lester’s supporters, including legislators, local elected officials, former commissioners, and environmentalists, said the firing was driven by Gov. Jerry Brown and high-powered lobbyists who wanted to erode some of the Coastal Commission staff’s independence in regulating controversial projects along California’s 1,100-mile coast. The governor’s office has repeatedly denied the allegation.

Pismo Beach City Councilmember Erik Howell, appointed to the commission by Gov. Brown in 2014, voted to dismiss Lester on Feb. 10. Since then, he’s received a hefty dose of scrutiny over his vote on a Pismo Beach project, accusing him of being influenced by a planning consultant and lobbyist known for having serious pull on projects before the Coastal Commission.

The project in question: a housing development on North Silver Shoals Drive. The consultant: Susan McCabe, owner of the Marina Del Rey-based firm McCabe and Company.

Over the course of 14 months, Howell’s position on the project evolved from ardent opposition to apologetic support.

In September 2014, Pismo approved the proposal from Silver Shoals LLC to build nine custom single-family homes, 10 custom townhomes, and a 1-acre park on a 3.7-acre parcel atop the bluffs. Neighbors concerned that the two-story design would obstruct coastal views opposed the project. They also took issue with the roadway and parking, which would negatively impact coastal access in an area that already sees heavily saturated parking during peak beach-going periods.

The Pismo Beach City Council approved the project 4-1, with Erik Howell being the lone dissenter.

“I think it’s a violation of our local coastal plan,” Howell said at that meeting. “I do want to go on record as not being in favor of the project as proposed.”

In his comments, Howell implied that the project might receive some modifications if the Coastal Commission reviewed it. The commission heard the project on Jan. 7, 2015, after it was appealed by neighbors and the Santa Lucia Chapter of the Sierra Club.

On Jan. 4 of this year, opponents of the project filed a lawsuit challenging the coastal development permit. Alan Stocker, a part-time Pismo Beach resident named on the project’s appeal, told New Times that he was surprised Howell supported it.

“He expressed a lot of the same concerns about it,” Stocker said. “He was leading the opposition to it.”

Stocker and other residents point to a series of meetings and comments made by Howell as the possible reason he changed his mind.

Howell said he met with the consultants and a few others, including Pismo Beach City Manager Jim Lewis, the previous night. He later told New Times that it was more of a spontaneous and casual dinner outing with other people in attendance.

On Feb. 10, during the hearing on Lester’s dismissal, Pismo Beach residents Ed and Chris Henry took Howell to task during public comment.

“It’s very concerning … to have our own commissioner having dinner and drinks with hired lobbyist Susan McCabe,” they said during the meeting, adding that Howell told them that McCabe’s involvement meant the project’s appeal wouldn’t receive support from the commission.

“To our shock and disbelief, Commissioner Howell told us to forget about the [commission] staff report because it was ‘dead on arrival,’” they said.

Howell declined to comment on the project or his decisions because of pending litigation.

Campaign disclosure forms for Howell, who is running for re-election to the Pismo Beach City Council, reported a $1,000 campaign contribution from Antoinette DeVargas, operations manager of McCabe and Company, two months before the commission’s November hearing. It’s his biggest contribution of 2015.

In a Feb. 24 LA Times column about the contribution, Steve Lopez cited an article from the The Desert Sun that describes DeVargas as McCabe’s partner of 19 years.

Howell also declined to comment on the contribution. McCabe and Company did not return requests for comment.

“I think there’s a reasonable correlation,” Stocker said, speaking about possible influence from donations and lobbyists, which he added also makes him wonder about what really happened behind the scenes in the lead-up to Lester’s firing.

“When you see firsthand the behind-the-scenes influence with something small like Silver Shoals, it’s a window when it comes to bigger issues,” he said. “I’m pretty distrustful of the process that led to [Lester’s] firing.”