Actress Mara Purl first fell in love with the play Sea Marks in the 1980s. She was living in LA at the time and something about the story—which centers on the heart-wrenching long distance relationship of a fisherman on a remote Irish island and a woman living in Liverpool—captured her soul.

One day, her agent called up and—out of the blue—asked if she’d like to try out for the female role. 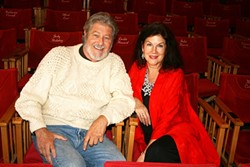 “I had never told my agent about my love of the play, but he intuitively thought it would be a good part for me,” Purl said. “’I said, ‘I’ll do it.’ He replied, ‘But you don’t know where or with whom,’ but it didn’t matter. I knew I had to do this play.”

Purl soon found herself in the tiny town of Cambria at the Pewter Plough Playhouse, working alongside co-star Christopher Law (the cast boasts just two people). As it turns out, the play’s author was a close friend of Law’s sister-in-law.

“She knew of my Irish heritage and handed me the play one day, and said, ‘You should do this,’” Law said. “When I read it, I knew she was right.”

And so began the pair’s journey toward theatrical destiny. They became quick friends with Pewter Plough Playhouse founder and director Jim Buckley, now the stuff of legend. The beloved Cambria community member passed away on Sept. 23 at the age of 102.

During the actors’ cold reading some three decades ago, Buckley reportedly broke into tears.

“Occasionally, he and his [then] wife Olga invited out-of-town professionals to do a special show, and that was the case that summer—the summer of 1984,” Purl said. “It was a breakthrough situation for all of us as well as the playhouse. We became a draw and people were coming from San Francisco and Los Angeles to see the play, which is rather unusual.”

This fall, the actors aim to conjure that magic yet again. Sea Marks will run through Nov. 8 at Pewter Plough Playhouse for an enthusiastic audience. I met up with the actors in the tiny theater, often called the “jewel box” of Cambria. They were in the middle of a costume rehearsal (Law wore long johns while Purl donned a red, silky robe).

I had much to ask them. Namely, what had they been up to since Buckley put on that epic performance of Sea Marks so long ago? Before returning to Cambria for the show, Law had lived in Africa, where he worked as a photographer guide. Purl landed a reoccurring gig on Days of Our Lives (among other shows) and is now the author of a best-selling novel series based on Cambria called Milford-Haven. Still, neither actor forgot about the powerful connection they felt while performing together.

When Sea Marks playwright Gardner McKay passed away in 2001, Law and Purl picked up the phone to share condolences. A friendship was rekindled.

“Last year, we got lunch and sat there and said, ‘Do you realize it’s been 30 years since we did the play?’ For fun, we decided to call Jim Buckley,” Purl said.

Buckley was then 101 and full of ideas. A passionate and cunning man, Buckley had continued to run the theatre and was excited to bring the show back.

“We thought, ‘If we can benefit the playhouse, which we love and has done so much for us, we would do it,” Purl said. “A year has gone by and here we are to do the production.”

If only Buckley could see the show now. He would most certainly be clapping from the front row.

“Jim had a real sense of theater and a great love for culture and an understanding that the cultural life of a town improves everybody’s life,” Purl said. “I think sometimes we think of culture as being optional, not important, and not part of the main course of life, but theater is where we reflect upon the question, ‘Who am I?’”

The play, which delves into themes of love, expectation, and the wilderness of the heart, is full of poignant questions for the audience to ask themselves and their romantic partners.

“Playwrights fling themselves out into the unknown and take a look. It’s like research and development for the soul,” Purl said. “For Jim, this was absolutely vital.”

Hayley Thomas is waiting for her man to return from sea at hthomas@newtimesslo.com.