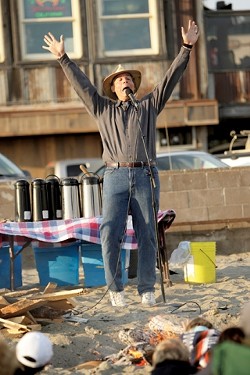 # Sometimes it's difficult to think of humans as a tribe. Inundated as we are with technological gadgets that allow us to hear music, access the Internet, and download videos often all at the same time what use does anyone have for the concept of survival? Or simplicity?

There are few things more simple and intimate than one human being relating a story to another. Just ask Kirk Henning, a Cayucos resident who, for the past 14 years, has been hosting a summer storytelling series on the beach in Cayucos.

"I like the transcendent feeling that I experience when telling a story, which is straddling the line between being in the story and conveying it to the audience," Henning said. "I like being able to give a gift when I tell a story. I like that everybody, no matter what economic class they come from, what race, what religion, everybody loves a good story."

Henning's wife, Patty, came up with the idea for a summer storytelling series at the beach. After contacting the county in order to get a permit for a fire (after all, a story, however good, simply isn't complete without a subsequent marshmallow roast), Henning began Stories 'Round the Fire. The first summer he scheduled eight performances. Eight people, mostly friends, attended the first show and by the end of the summer an estimated 25 people were turning out to sit by the fire and listen to Henning expertly weave his tall tales.

In more recent summers, the storyteller has come to expect a crowd of 80 to 100 people, comprised of 50 percent tourists and 50 percent locals. They listen to the ocean, to Henning and the guest storytellers he occasionally secures, and to the blazing fire. Visitors who can afford to donate $3 do so. Those who can't spare the money are equally welcome.

# Henning acquires his stories from various sources. He reclaims old folktales that have fallen into public domain.

"A lot of storytellers take an old folk tale and then create their own version of that," he explained. "It's a lot like jazz. You have a central theme, and you kind of riff on that."

While storytellers have long embraced the tradition of drawing their tales from a colorful and delightful sea of shared characters and plotlines, Henning also appreciates the opportunity to write his own stories tall tales with universal themes. Relying upon an intangible feeling to guide him to the right story, Henning has no clinical method of selecting the stories he will tell. He selects the stories that affect him.

During the mid-'80s, after watching international storyteller Diana Ferlatte perform, Henning was inspired to explore the little-practiced art form. Around the same time, men's movement leader Robert Bly was emphasizing the significance of myths and folktales, so when Henning moved to San Luis Obispo County from Sacramento, he began his career as a public storyteller.

Henning began by performing for preschoolers at Coalesce Bookstore, an experience he jokingly refers to as storyteller boot camp. He eventually expanded to other venues: libraries, storytelling festivals, senior citizen homes, workshops, and schools. Between 1995 and 2000, Henning and his wife organized the Pacific Storytelling Festival at Monta"a de Oro.

"For that we brought in nationally recognized storytellers," he said. "That got really popular. People were coming from all over the state."

# Eventually, Henning decided that the festival was simply too time-consuming. This year, he's facilitating a Stone Soup Storytellers Retreat at Camp Ocean Pines in Cambria Sept. 28 through Oct. 1. Interested participants can visit his website or send him an e-mail.

One of the more common forms of local storytelling theater also holds a special place in Henning's heart. As the drama coach at Coast Union High School, he helps the students with their annual theatrical production.

"When I teach my students about theater, the central theme is telling a story, and we're all storytellers," he said. "It's storytelling it's just a different form."

Though Henning originally started assisting the school when his daughter began high school, his participation in local theater has since expanded. Last fall, he directed SLO Little Theater's production of The Full Monty, an experience that's a story in and of itself.

To trek backward in time, simply drop by Cayucos Beach on a designated story evening and experience screen-free entertainment the likes of which many humans seem to have forgotten exists.

INFOBOX: A summer of stories

Kirk Henning will be telling stories 'round the fire on the beach south of the pier in Cayucos on July 28 and Aug. 4 and 18. Stories start at 7 p.m. and will be followed by a marshmallow roast. A $3 donation is requested, and don't forget to bring a blanket and/or a beach chair. For more information, visit www.kirkhenning.com or e-mail kirkhenning@gmail.com.