Appearances can be deceiving, and that fact is especially true of restaurants and chefs. A prime example is the SeaVenture Resort, adjacent to the Pismo Beach pier. The SeaVenture restaurant has had many chefs come and go through its busy kitchen doors, and many created impressive menus. Some of them left to seek the glamour that can come from being a famous chef in a major city, if you’re good enough. But it’s not so easy in small, community-oriented cities like those in SLO County, where locals walk down the street and nearly everyone knows their name. And that’s exactly why chef Everett “Casey” Walcott, SeaVenture’s newest chef, loves living here. While admitting he could make a lot more money in a major city, he has no plans of moving to San Francisco or L.A.

“My family and community are very important to me, and I love the Central Coast,” Walcott explained. “I don’t ever want to leave here.”

Although Walcott looks young—he’s 28—he isn’t new to the business. He was hired in his first full-time job at the age of 16 in 1999 when he landed a position at Bistro Laurent in Paso Robles. That life-changing job inspired him to work toward a career as a chef.

“My brother, Judd, got me the dishwasher’s job, and the night I started was their busiest dinner ever,” Walcott recalled with a laugh.

His family relocated from Durango, Colo., to Paso Robles in 1990 when he was 7. “I hated washing dishes, and I wanted to walk out on the spot. But I knew I couldn’t do that after taking the job, so I stuck it out. I was really frustrated. Suddenly, Laurent came over and started doing dishes with me. I learned a lot from him over the years. He’s got a big heart.”

Walcott quickly moved up to kitchen work, and he began dreaming of attending culinary school. But Chef Laurent Grangien advised him to save his money, explaining he would teach him everything he needed to learn about classic French cooking.

I’m a California Culinary Academy alumna, and I agree wholeheartedly. The school is very expensive to attend, but it’s not necessary to become a chef. Honestly, few people are as fortunate as Walcott was working under a chef as immensely talented as Grangien. The French-born Grangien worked in one of the finest restaurants in Paris—Michel Rostang—before immigrating here. Walcott worked for his mentor, Grangien, for 4 1/2 years. While there, he worked with many locals who became chefs: Jeff Jackson of the Range, “Chef Charlie” Paladin Wayne, Robert Root at Cal Poly. 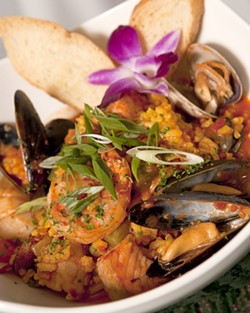 Walcott enthused: “I was only 18 when Laurent had me catering, and here I was telling these guys what to do.”

Walcott left because he had gotten married and had a son, and needed a better-paying job. He found it with chef Kelly Case of Kelly’s Restaurant in Paso who promised to teach him kitchen management. When her restaurant closed, he moved on, working in several eateries and a bar. Then he helped a friend open a new place, Profiles (formerly Calago), but to his great disappointment the business failed. Finally, a friend told him SeaVenture needed a sous chef. The chef interviewed him, and then called him back an hour later offering the job. Nine months later, the chef’s position opened to Walcott, and he’s been there nearly a year.

“Ever since I was a kid, I loved being in the kitchen and creating new dishes, and I love making pastries,” Walcott said happily.

That talent shows in his handmade desserts, like the irresistible apple crostada with vanilla ice cream and caramel sauce, and the trio of crème brulees: chocolate, banana, and peanut butter.

If you’ve never dined in this restaurant atop the SeaVenture Resort, you’ll be impressed by the views of Pismo Beach. During the winter months it’s best to dine early to catch the spectacular sunsets. The colors range from beautiful pink and blue to shades of purple and orange, creating a masterpiece in the sky. The dining room and the circular bar in the center provide nearly everyone a panoramic view. There are also back rooms that are perfectly cozy for private parties. During the summer, they open up the rooftop deck where you can dine alfresco, enjoying the views and the ocean air.

Undoubtedly, Walcott has the passion and dedication that will keep him around awhile. He created a very good menu that offers something for every taste, from seafood and shellfish to chicken and steaks. I tried several different dishes here, and while all were good, some stood out. Entrees range from $17 for pasta pomodoro with tomatoes, pine nuts, and rich with mascarpone and Parmesan cheeses, to $50 for lobster tail with roasted heirloom potatoes and seasonal veggies.

I dined with hubby Dan, and we shared several dishes with wine chosen from the excellent selection of wines by the glass. The signature dish, “the SeaVenture” ($27), was our favorite. The chef did a great job with the saffron-tomato risotto that featured shrimp, scallops, clams, mussels, white fish filet, and spicy sausage, plus two crunchy crostini. The 10-oz. pan-seared filet mignon ($29) was very tasty and tender, served with “pommes macaire,” steamed asparagus, and a red wine reduction.

Although he’s the executive chef now, he hasn’t forgotten his work ethic: “I’m glad I started from the bottom up. I’m very hands-on and always busy in the kitchen. I do pantry and prep with my cooks. I think it’s important for them to see me working alongside them.”

As kitchen manager and creative chef, he believes it’s important to add some excitement and energy to motivate all of the restaurant staff.

“Laurent taught me to keep my dishes simple and cook them to perfection,” Walcott remembered. “That’s what is most important.”

The inspired chef has another goal in mind for SeaVenture: adding healthy choices to the menu.

“My own health issues made me think, ‘I’m feeding people good food, but it’s real rich and heavy,’” he admitted. “I want to offer great food and better health options for the wide variety of people coming to SeaVenture.”