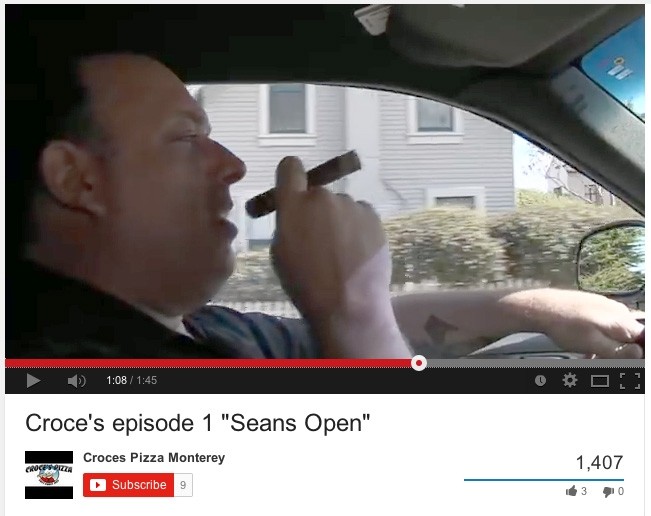 A man sits behind the wheel, a cigar clenched between his front teeth, smoke leaking out of his mouth and whipping through the wind of an open driver-side window as the song “Woke up this Morning” plays in the background.

If it seems familiar, that’s because the video is a spot-on re-creation of the opening to The Sopranos. Instead of New Jersey and New York, though, the Monterey landscape crawls across the frame. Instead of the iconic fictional gangster Tony Soprano, it’s Sean Croce.

There are actually five videos on the old Croce’s Pizza YouTube channel, crossing pizzeria marketing with Mafioso subplots. In the episode, “Buried ’em” Croce uses a backhoe—while a cigarette dangles from his lips—to dig a shallow grave in which he dumps a competitor’s pizza box. At the end of the video, Croce strolls down a residential, gated driveway wearing a black bathrobe to pick up a copy of the Monterey Herald.

In reality, that restaurant has long since closed, and his latest venture in San Luis Obispo led to a combination of allegedly unpaid debts, unpaid taxes, Health Department fees, and a myriad other financial troubles, all preceding the mysterious and sudden closure of Enzo’s East Coast Eatery.

According to San Luis Obispo County Environmental Health Services, about four or five letters were sent to Enzo’s East Coast Eatery, informing the owner that the business had lapsed in its fee payments. The first bill went out in December 2013; a second bill was sent in February with a late penalty attached. In May, the office received a payment of $528, along with the $132 late fee; however, the check didn’t clear. All told, Croce was on the hook for $827 in fees, which weren’t paid, and health inspectors revoked the business’ permit.

Another letter on the building informed passersby that the landlord considered the building abandoned after Croce failed to pay rent for 14 consecutive days after it was due.

This isn’t the first of Croce’s businesses that have fallen to such a fate.

A Rochester, N.Y., native, Croce has opened and closed at least three now-defunct businesses across multiple locations along the Central Coast. Based on interviews with former associates, all of those businesses cratered and, in the process, left property owners, business partners, and investors either partially unpaid—or, as some told New Times, completely screwed.

A Monterey-based property owner who leased the space for DOC Ricketts Lab—another of Croce’s businesses, which closed in mid-2012, according to the Monterey County Weekly—would only say “it was not a tenancy that ended like it was supposed to have ended.”

“We don’t feel it’s in our best interest to talk smack on this guy or anything like that,” he said. “The bottom line is Sean left our tenancy, and it was not a happy ending.”

One former investor said he lost about $100,000 in his dealing with Croce.

Few people New Times contacted were willing to be quoted by name for this story, but all told similar stories about their financial interactions with Croce, which ended in the businesses closing, debts unpaid, and Croce reportedly vanishing.

A Monterey County civil records search showed that Croce was sued 10 times between 1996 and 2010. A plaintiff in one of the cases said he sued Croce and DOC Ricketts Lab after he was assaulted in the club, and there were no security guards to prevent it. Though he said he won the case against Croce, he was unable to collect, and Croce “just kind of disappeared.”

The Monterey County Weekly’s Squid columnist wrote in 2009, before the club closed, “Sean says Doc’s is undergoing renovations and still holds private parties, but Squid’s skeptical. Word is he’s moved to San Luis Obispo. Squid made another diagnosis awhile ago. Squid’s no gangster. Hopefully the Croces are wise guys—or at least wise enough to reach the same conclusion.”

According to records held at the SLO County Clerk-Recorder Office, the State Board of Equalization issued two tax liens against Croce. In February 2013, he received a lien totaling $9,634.14, and in February of this year received another lien of $45,764.55. Additionally, in November 2010, the Board of Equalization issued a tax lien against Croce’s Pizza (another local business before Enzo’s) for $5,673.50.

Another local record showed that Croce was ordered to pay Jordano’s Inc. (a Santa Barbara-based food and beverage distributor) $2,544.48 as the result of a superior court judgment. A call to Jordano’s wasn’t returned as of press time.

In SLO County Superior Court, Croce’s name appeared in one case brought by John and Carolyn Fagnani. Carolyn owns the building that formerly housed Croce’s Pizza in SLO, located on Broad Street. According to Carolyn Fagnani, she obtained a judgment against Croce when he failed to pay about four months’ rent, and the latest case was an attempt again to recoup the loss.

Croce was ordered to appear, but on April 14, a $500 bench warrant was issued for his arrest. The warrant was later canceled after the agent was “unable to make personal delivery.” The agent noted that the warrant was recalled from court.

In yet another case—this one a criminal case out of San Diego—Croce was charged with four felonies related to identity theft, computer fraud, burglary, and grand theft, according to a spokesman for the San Diego District Attorney. The charges stemmed from a mix up at Bank of America, the result of which allowed Croce and his ex-wife Michelle to allegedly transfer thousands of dollars from the account of a woman with the same last name.

According to the San Diego spokesman, the Croces each pleaded guilty to one count of accessory after the fact, but failed to show up at sentencing. A $100,000 warrant was issued for their arrests, and on Feb. 5, 2010, each was sentenced to three years’ probation, with the felony charges reduced to a misdemeanor.

After the long list of failed businesses, about the only things that remain of Croce’s restaurants and clubs seem to be his videos.

In episode No. 2 of Croce’s YouTube series, he pulls up to a dock in a red Ferrari and jumps onto a boat named “Croces.” Once aboard, Croce pours three shots as his friends lament about the chain pizza restaurants passing off sub-par pizza as authentic Italian. Across from them sits a man sporting a Round Table Pizza shirt, with this mouth duct taped shut. The camera cuts to two men binding a stack of pizza boxes with heavy chains, which is attached to a cinderblock, and then thrown overboard.

The episode is titled “bon voyage.”