See no evil, smell no evil 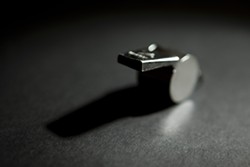 In separate but concurrent lawsuits against the district, which provides sewage services over 165 square miles—encompassing residences in Arroyo Grande, Grover Beach, and the Oceano Community Services District—Devina Douglas and Scott Mascolo say they were shut up for speaking up.

Mascolo’s attorney, Thomas Giovacchini, said his client “believes he’s being retaliated against because he has made complaints.”

“Nobody has been fired,” responded John Wallace, president of the Wallace Group, who serves the dual role of district administrator and engineer.

Regardless, Douglas and Mascolo are suing under the claims that district officials punished them for shedding light on everything from alleged manipulation of water-quality testing to skimming hundreds of dollars in district funds to pay for employee barbecues.

A Cal Poly graduate with a degree in microbiology, Douglas began work as a district laboratory technician in early 2009. According to her lawsuit, she was soon being asked to “dump” samples that other employees knew would fail water quality standards. In the following months, she claims she was asked to send some samples to outside agencies rather than test them herself, and selectively test at times when a given sample would come back “only at its clearest.” She shared her concerns with Wallace, according to the lawsuit, and by February 2010 decided to file a complaint with the California Regional Water Quality Control Board, which ultimately supported her claims that violations existed.

In fact, on Jan. 12, the water board issued a “disciplinary action” on plant Superintendent Jeff Appleton in response to Douglas’ complaints, which were confirmed by other district employees, according to its investigation. The board’s Office of Enforcement proposed that Appleton’s job title be downgraded for one year.

After complaining, Douglas was “frozen out” of plant operations and soon received an unsatisfactory job performance evaluation. The district, with approval of its board of directors, chose to eliminate her position entirely last September.

“This review appears to be retaliatory in nature for my unwillingness to allow the district to jeopardize its reputation, certification, and ethics,” Douglas wrote to Wallace and Appleton in response to that evaluation.

Douglas’ responsibilities were contracted to Abalone Coast Bacteriology and purportedly downsized the district’s lab costs from $100,000 to $25,000.

“The reason wasn’t for savings,” Stulberg said. “The reason was to have control over the testing results; that’s what we allege.”

Also according to the lawsuit, Douglas says the district funneled her work back to the Wallace Group.

“Plaintiff alleges this practice of self-dealing is part of a pattern and practice within the plant to reduce oversight and facilitate shoddy inspection and treatment of wastewater and effluent,” according to court documents.

Wallace, however, defended that the Wallace Group did not subcontract Douglas’ work back to itself.

“We have no relationship to Abalone Laboratories,” he added.

Though not officially terminated, Douglas was effectively canned by a unanimous vote of the board of directors Sept. 14, 2010—much to the dismay of her coworkers, who laid into Wallace and directors for eliminating her position. One of those coworkers was Mascolo, who’s also on the chopping block.

Mascolo—Douglas’ former superintendent, who backed her up when she complained of being coerced into questionable testing practices—is now facing the end of his own job. An employee of 12 years, Mascolo was blindsided with an official reprimand and had to defend his position at a hearing before district officials and a designated mediator. Facing charges of violence and questions of his psychological stability, Mascolo wasn’t actually called upon to defend himself. District officials presented Wallace as their witness and were unable to produce the witnesses they claimed had been fearful of Mascolo, according to his lawsuit.

In fact, one supposed witness, Rick Jackman, refused to testify against Mascolo despite being labeled as a victim. In a written declaration for Mascolo’s lawsuit, Jackman said he was pressured to say Mascolo had thrown a wrench at employees, but Jackman refused to lie.

“I do, however, fear retaliation for that and for signing this declaration,” Jackman said in his written statement.

Neither Wallace nor the district’s attorney, Michael Seitz, would comment on Mascolo’s case because it’s an ongoing personnel matter under litigation.

The district dropped its action against Mascolo in August 2010, though officials didn’t hire him back and further conditioned that he be psychologically evaluated and attend anger management—which Mascolo did and passed with a “very low risk” assessment. He still wasn’t allowed to return to work.

In September 2010, Mascolo may have pounded the final nail into his proverbial coffin.

Plant employees would often recycle scrap metal, usually drawing in about $150 or so, Mascolo told New Times. That money would pay for barbecues and other morale-boosting activities. But some employees began cashing in larger amounts of metal and keeping the money; $700 was kept in the “barbecue fund”–essentially just a box with no oversight–after one trip to the scrap yard, Mascolo alleged.

He reported the actions to the SLO County Office of the District Attorney and was told to go to the Sheriff’s Department, which he did. District officials are now using his complaint as grounds that he falsely accused employees of “embezzlement” (allegations Mascolo says he never made) and that he should be outright terminated.

Mascolo’s complaint did, however, lead to a change in policy. Now, all proceeds from scrap sales are put in the district’s general fund rather than the effectively untraceable barbecue fund.

Wallace said the district changed its policy “since the question was raised on it … in order to avoid any further questions on it.”

“So I basically spoke out about it, and it just kind of turned into a big mess from that point,” Mascolo said.