Singer-songwriter Steve Key is best known locally as the producer of the long-running Songwriters at Play series, which hosted three or four shows a week before COVID-19 at various locations throughout the county. These days he's playing weekly at Sculpterra, bringing in a few guest players to trade songs with. He'll be there on Saturday, April 10, from 12:30 to 3:30 p.m.

He's also known for penning "33, 45, 78 (Record Time)," which was a hit for country star Kathy Mattea. Key's a prolific songsmith whose most recent album, How I Learned to Drink, is filled with well-penned tunes. I have to say, however, my favorite is the title track. It's a narrative ballad about a 12-year-old's first experience with alcohol.

"Billy got the bright idea—hitchhike to the nearest town/ Find some guy to buy us wine/ Be back in camp by sundown// We missed the dinner call—counselor got kinda mean/ That bounty in our paper bag/ Tasted like Kool-Aid and kerosene."

The song goes on to chronicle the protagonist's drinking career: beers with a girlfriend under a bridge; drinking as a frat boy at San Jose State; on to a life of alcohol abuse until he winds up in a hospital with his old friend Billy encouraging him to go to a different camp, "The Rehab Ranch."

"So here I am for 28 days/ The counselors get kinda mean/ I'm drinking coffee by the quart/ Tastes like river mud and livin' clean."

The song, available along with the complete album on Key's Bandcamp page, features sparkling guitar work by Dorian Michael (The Cinders, CC Riders with Louie Ortega, The Irene Cathaway Rhythm & Blues Band) as well as drums and percussion by Nashville session player Paul Griffin (Sheryl Crow, k.d. lang, John Prine, Todd Snider), both of whom will be on hand when Steve Key plays a house concert in the backyard of an Orcutt home on Sunday, April 11, starting at 2 p.m., which will be livestreamed starting at 1:50 p.m. on Key's Facebook page @stevekey. Fiddler John Nowel (Stereo Chickens, Jody Mulgrew) will also join in, and for those interested in attending the backyard concert in person, you can call Rhonda Cardinal (805) 937-8402 or email jwcardinal@msn.com to see if there's space.

Expect an afternoon of ballads, blues, classic country, folk, and original music. Tips can be submitted via PayPal (stevekey57@gmail.com) and Venmo (Songwritersatplay).

Other virtual concerts this week include the Cal Poly Music Department's Open House Recital at 2 p.m. on Saturday, April 10. Cal Poly's Arab Music Ensemble, Choirs, Symphony, University Jazz Bands, Wind Orchestra, and Wind Ensemble will perform, followed by a live Q-and-A after the concert. The presentation is free and open to the public on the Music Department calendar website: music.calpoly.edu/calendar/special.

Cal Poly Student Opera Theatre will present Musical Theater Duets at 7:30 p.m. on Saturday, April 10. "The duets, from some of the most classic and beloved American musicals, will be performed by 17 music majors who have collaborated remotely through extensive virtual rehearsals, recordings, and online workshops," according to press materials. View "Anything You Can Do" from Annie Get Your Gun, "The Rain In Spain" from My Fair Lady, "If I Loved You" from Carousel, and "All er Nuthin'" from Oklahoma!

"Viewers will see two students perform on-screen at once, masterfully gesturing and interacting with one another while miles apart," Amy Goymerac, Student Opera Theatre producer and director, said. 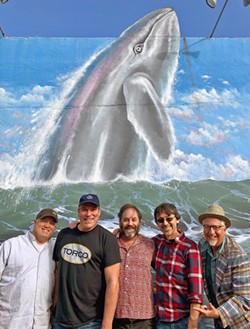 "Rosebud is geared toward fulfilling that jones that Deadheads crave," Cooper said. "The band mixes Dead tunes with Jerry Garcia Band, Dylan, other covers, and originals in the same style Jerry could have done."

On Sunday, April 11, from 3 to 6 p.m., see excellent rock quartet Lu Lu and The Cowtippers, whose new EP, Just Keep Going, is off-the-hook rockin'! What a great way to spend a Sunday afternoon! Δ