A local seed library is starting to grow

Seed slavery. Seed dictatorship. Seed sovereignty. These unusual-sounding concepts are at the root of a growing local—and global—effort to save and exchange seeds, free of charge, at a community level. 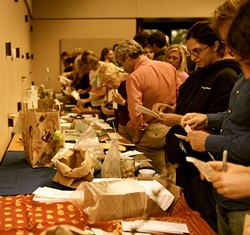 Spurred by the rise in corporate ownership of the world’s seed stocks, and by an increasing number of patented, genetically modified organism (GMO) seeds, thousands of seed keepers around the world are saving seeds and working to keep them free.

San Luis Obispo County gardeners and free-seed advocates gathered Oct. 5 to exchange their recently harvested seeds and share ideas about building a local seed library. On long tables at one edge of the room, seeds of an incredible variety of vegetables, flowers, fruit, herbs, and native plants sat in carefully labeled paper bags, dishes, and envelopes.

Excited gardeners browsed and chatted, reading labels and gathering up whatever they wanted into recycled junk-mail envelopes for later planting.

“The idea is that seeds are community and public property,” Paso Robles farmer John DeRosier told the group. At a local seed library of the future, for example, backyard gardeners could check out a variety of seed—lettuce, say—then grow the lettuce, harvest the seeds, and give some back to the seed library.

DeRosier, who started saving seeds as a teenager, is especially intrigued by edible seed crops, such as grains, sunflowers, lentils, and garbanzo beans. He’s been growing historic varieties of oats, wheat, quinoa, millet, and other grains in fields all around SLO County.

“Seeds are such a powerful aspect of our heritage and our culture as humans, not just our food. There’s a tremendous amount of our history in grains,” he said. “The diversity, with tens of thousands of varieties of wheat, is the backbone of who we were and what made us strong.”

These days, though, most of the world’s grain crops consist of GMOs, a worrying trend that has led to a major loss of diversity, DeRosier said. Like others at the gathering, he supports Proposition 37, which would require labeling of food products containing GMOs.

In contrast to conventional plant breeding, where seeds from two plants of the same species are crossed, GMO crops are created in a laboratory by inserting a gene from one organism—plant or animal—into another organism that’s completely unrelated, such as crossing a tomato with
a salmon.

The resulting seeds are often patented by multinational corporations, preventing farmers all over the globe from saving and exchanging their own seeds for replanting.

“GMO—God Move Over,” quips a new report coordinated by food activist Dr. Vandana Shiva, Seed Freedom: A Global Citizens’ Report. Its 100 authors from around the world are calling for people to become empowered “to liberate seeds and themselves,” and for the rollback of patents and laws that have led to “seed slavery and seed dictatorship.”

“We are witnessing a seed emergency at a global level,” the report states.

For Melanie Blankenship, who grows seeds and plants to sell at her Nature’s Touch store in Templeton, a local seed library or seed bank would be a welcome resource.

“A seed library is truly needed. It’s a true form of food security. You cannot have the security of knowing your food will be there tomorrow unless you’re planting the seed,” she said in an interview after the Oct. 5 seed exchange.

She likes to grow rare, unusual, and old-fashioned varieties of plants and seeds, and said she has noticed an alarming reduction in the diversity of seeds available commercially ever since a few multinational corporations started buying up seed companies around the world.

Quite a few details remain to be sorted out, and interested people will meet on Nov. 14 from 6 to 8 p.m. at the SLO Grange to continue the process.