More than 20 years ago, Los Osos painter David Kreitzer made a huge splash with his image for the Seattle Opera’s production of Tristan und Isolde. Painted in a way that blends the styles of Gustav Klimt and his protégé Egon Schiele, Kreitzer’s poster was a massive seller, and people still happily fork over $100 for a copy.

The Seattle Opera has tapped Kreitzer again, this time to create an image for its poster promoting Richard Wagner’s Der Ring des Nibelungen, or The Ring of the Nibelung, a cycle of four epic operas based loosely on characters from the Norse sagas. These Norse tales were also the source material for J. R. R. Tolkein’s The Ring, and Wagner’s music was perhaps most famously used in Apocalypse Now, when a formation of helicopters blasts “The Ride Of The Valkyries” as they attack a Vietnamese village.

Originally the Seattle Opera put out an open call for artists to submit ideas, but after Kreitzer sent up a series of sketches, they called off the competition, gave him the job, and decided to hold an art exhibition in conjunction with the opera. He’ll exhibit more than 70 of his works based on the famous opera cycle, which runs for the month of August in Seattle.

“They wanted a painting for the promotional poster and then a painting to represent each of the four opera cycles,” explained Kreitzer, “so I did those five paintings and I just kept going.” 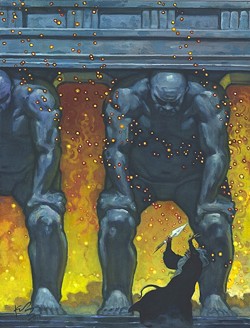 All told, Kreitzer created 20 major works and 52 smaller studies—all available for sale ($500 for the smallest up to $10,000 for the image used in the poster). Five paintings will be on display in the opera house, with the remaining images displayed in the Fisher Pavilion nearby.

“This is a monster production,” said Kreitzer of The Ring. “It’s got a huge orchestra, a huge cast. And the paintings will have a built-in audience of all the people coming to the opera.”

Rather than painting scenes from Seattle’s production, Kreitzer instead focused on the story itself and let his imagination run wild. For instance, in the first opera cycle, Das Rheingold, the Nibelung dwarf Alberich steals gold from the bottom of the Rhine river after being teased by three beautiful mermaids, so Kreitzer created four major paintings depicting the beautiful but cunning Rhinemaidens. In one painting, the three beauties stare out of the painting at the viewer, their eyes glowing with a hint of evil as air bubbles swirl around them. In another, also seen from underwater, the three nudes swim in formation. In an image looking into the water from above, the three maids playfully blow bubbles at the viewer. In another, also from above, Kreitzer has painted the distorting effects of seeing the mermaids through the rippling water surface.

“I decided to pick characters and scenes and depict them,” explained Kreitzer. “There are a lot of 19th century German paintings of Der Ring des Nibelungen, but the painters then made the image look like opera singers in costume on stage.”

The singing fat lady with the horned helmet and blonde braids is a cliché literally taken from this tradition.

Kreitzer, when pressed, describes his work as romantic realism, and indeed he is an artist interested in both accurate human form and realistic landscape, but his work also romanticizes both the natural world and The Ring’s characters. For two and a half years, this project has all but consumed him. He filled four sketchbooks with images.

“If I want to see it, I have to sketch it,” he said. “The Rhinemaidens were the most fun, and of course The Valkyries are the most fantastic and recognizable images. To make paintings like these, you have to have a code. I’ve seen Valkyrie paintings with winged horses, but that looks awkward, so I have the Valkyries wearing winged helmets that suggest flight. The idea is to make fun use of a certain amount of code but make the images as original as possible. They need to read well graphically but also be something people could live with.”

And now, finally, this huge project is coming to a close. He hopes the paintings speak for themselves.

“If [a painting] has to be explained, it’s a failure,”  he said.

And to explain his diverse style, he noted, “I paint the painting the way it needs to be painted. If you get stuck in one style, then that’s how you become known and people expect you to always paint in one style. It’s limiting.”

David Kreitzer is clearly an artist for whom the sky’s the limit. See more of his work at dkreitzer.com.

Glen Starkey wants his precious. Tell him he can’t handle it at gstarkey@newtimesslo.com.