Last December, PG&E employees at the Diablo Canyon nuclear power plant were asked to fill out a survey. It was of the “are you happy with your job?” variety. The results overall: many aren’t. And the survey is just a hint at a growing rift between employees and management.

A copy obtained by New Times shows Diablo Canyon employees were less content than the rest of the PG&E family. The questions were weighted based on the number of favorable responses against the number of unfavorable ones and given a percentage. Companywide, the survey results were 67 percent in the positive on average. At Diablo Canyon it was 57 percent.

Of the questions, the one that scored the best with 96 percent favorable was “I am committed to the success of PG&E.” Similar questions scored much the same, generally around 70 to 80 percent.

When it came to management and the overall direction of the plant, the results took a serious dive. The two worst scoring questions were, “My work group has the resources … necessary to do quality work,” and, “Local management takes into account the impact of their decisions on employee welfare.” Both scored just 40 percent favorable.

Mark Mitchell represents the newest group of unionized employees at Diablo Canyon: Engineers and Scientists of California Local 20. At a recent public meeting of the Nuclear Regulatory Commission (NRC), Mitchell got up and spoke bluntly. “When we say things are bad, we mean they’re really bad.”

For more than a year, the union of about 450 PG&E engineers and technical workers (about 250 from Diablo Canyon) has been in a fight with the company over what members deem “unfair” business practices and a policy of pursuing short-term profits at the expense of the plant and workers.

Recently, their complaints have stretched beyond the walls of Diablo Canyon and PG&E to the NRC. Typically, the NRC focuses on the stability and safety of nuclear plants rather than labor issues. But at Diablo Canyon, they’re taking a special interest. In other words, the relationship between the employees and company management has NRC staff looking at whether it could endanger the public. 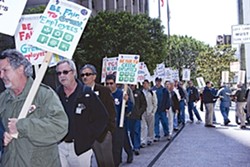 “We’re aware of the climate between labor and management and we’re being extra vigilant on our inspection activity to make sure that it does not impact plant operations,” NRC spokesman Victor Dricks said. He declined to comment specifically on how the inspectors were being more vigilant.

Dricks also declined to talk about a different NRC investigation at Diablo Canyon. Another group of plant operators circulated a petition concerning problems with management and sent it to the NRC. In response, the NRC sent a team from its investigations unit to Diablo Canyon, according to multiple sources. Unlike the usual crew of onsite NRC members, the investigative teams carry weapons as well as some police authority.

Dricks declined to comment on any investigations, citing an unwritten policy. He only spoke generally about what NRC investigators do, saying they “frequently follow up on allegations that we may receive either from members of the public or nuclear power plant workers.”

Engineers with the Local 20 haven’t gone as far, but they are becoming more active. On May 29, the Diablo Canyon engineers bused to San Francisco where they met up with others from the union to protest outside the company headquarters. That protest was the boiling point after more than a year of failed labor negotiations with PG&E’s newest union.

According to union representative Joshua Sperry, PG&E’s management is punishing the engineers and technical workers who decided to join the union last April. When negotiations reached an impasse, he said, PG&E forcibly implemented a salary and benefits package that was handily rejected by the union members months earlier.

“They’re pretty much sticking with their initial proposal and saying, ‘When you walked in that was the best [offer] you were ever gonna get,’” Sperry said. That offer included an unwanted pension plan and the elimination of a coveted consulting job classification. “We expected some type of dialogue and we’re getting a brick wall.”

For now, union members can do nothing more than negotiate and protest—their contract prohibits members from striking until December 2011. A mediation is scheduled to take place next month.

“We believe the issues are most appropriately addressed between the company and the union,” Christensen said. She added, “What I can say is that we do have a strong culture of safe operations here at [Diablo Canyon] and we will ensure that it remains that way.”

Employees who spoke with New Times over the past few months said the plant is safe, but they worried it wouldn’t stay that way. According to union members, PG&E is cutting overhead through attrition, which has whittled the pool of experienced workers and ultimately could dilute the safe operation of the plant.

Christensen said the company is reducing the Diablo Canyon workforce through attrition. However, she added, the reductions are to bring Diablo Canyon more in line with other similar-sized plants.