Self Made: Inspired by the Life of Madam C.J. Walker is a fascinating look at an underrepresented part of black history

SELF MADE: INSPIRED BY THE LIFE OF MADAM C.J. WALKER

Editor's note: Movie theaters aren't open for the foreseeable future due to the COVID-19 pandemic and the restrictions that have come with it. And we know you're stuck at home, so we thought we'd help you figure out what to watch from the comfort of your couch. For the next few weeks, Glen and Anna will be reviewing recently released movies, TV shows, and series available via online streaming services. Good luck out there. And stay healthy. 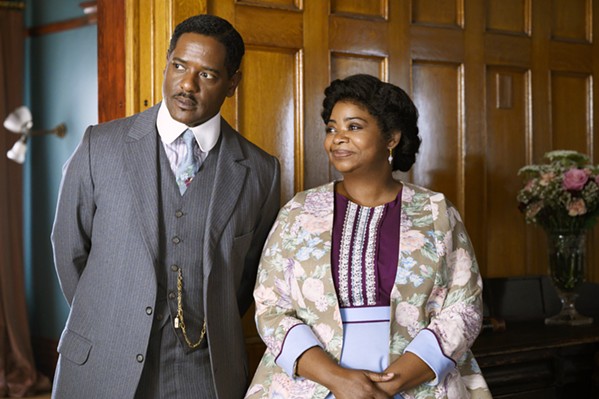 Glen I'd never heard of Madam C. J. Walker or any of her products, but she's got a fascinating story of tenacity and perseverance. Born Sarah Breedlove in 1867 on a cotton plantation, her early life was one of deprivation. Her success story begins when she meets Addie (Carmen Ejogo), a door-to-door saleswoman who sells tins of her "hair grower" to black women. The concoction works, and Sarah wants to go into business with Addie, who rejects her because she's not the image Addie wants representing her product. Addie is a light-skinned black woman with refined features, while Sarah is dark. This insidious form of racism within racism is one of the series' best developed themes, which Sarah is desperate to overcome. She may not have created the 1960s "black is beautiful" movement, but she certainly set the groundwork for it. It's an interesting and entertaining—but also sad and infuriating—story of a driven woman beating the odds. It's also the story of Sarah's daughter, Lelia (Tiffany Haddish), who Sarah hopes to groom into her successor.

Anna Sarah believes in the product Addie sells; it changed her life when the stress of a violent marriage left her hair patchy and thin. Addie's hair grower worked for her, so Sarah couldn't be more ambitious to share the news and join Addie's sales team. But when the woman she considered a friend basically tells her she isn't good enough for the job, Sarah decides to take matters into her own hands. Tons of product testing and tweaking, and she has her own product, arguably even better than Addie's. She deputizes her family to start building her business, but her dreams didn't stop with one product. Soon she's opening a beauty parlor and then a factory for a line of products. Addie's rivalry gives this series a sense of competition and a bit of a "bad guy" to loath. Sarah's son-in-law, John Robinson (J. Alphonse Nicholson), is a bumbling fool who just can't seem to get it right, and Sarah's husband waffles between being her advocate and being jealous of her success. It's a four-part series, and that feels just about right. She's a fascinating lady, and Spencer took on the role with gusto.

Glen We learn about Sarah's interactions with black leader and orator Booker T. Washington (Roger Guinevere Smith), civil rights activist and author W.E.B. Dubois (Cornelius Smith Jr.), and—after she became wealthy—her neighbor John D. Rockefeller (Frank Moore), at the time the wealthiest man in America. Blair Underwood is great as the put-upon Charles James Walker, Sarah's third husband, as is former SNL star Garrett Morris as Walker's wise father Cleophus. It's an interesting story given enough space to breathe life into this little known (at least to me) part of history. I did find slightly off-putting an ongoing fantasy element interjected into the episodes meant to illustrate some of Sarah's demons, but if you're cooped up at home, this is definitely worth your time.

Anna I too found the fantasy element a bit odd. It just didn't seem to fit with the style of the rest of the series. Perhaps it didn't come to life as much on screen as it did on the page. Lelia's a loving but somewhat foolish best friend to her mom, but nevertheless her biggest supporter. Their dynamic works, and while Sarah is at times frustrated by Lelia's flighty nature and not so thought-out choice in a husband, her love for her daughter is palpable. Sarah's a strong woman who's very much finished with taking crap from anyone, her husband included. She takes herself seriously and expects others to as well. It's both uplifting and frustrating, but definitely worth a viewing. Now that almost all of us will be homebound, there will be plenty of time to catch up on all the new streaming content. Make sure Self Made makes it on your queue. Δ