They all have public lands that are within the control of the U.S. Bureau of Land Management (BLM), and are included the BLM's 2014 Central California resource management plan, which means they're technically open for new oil and gas leases. 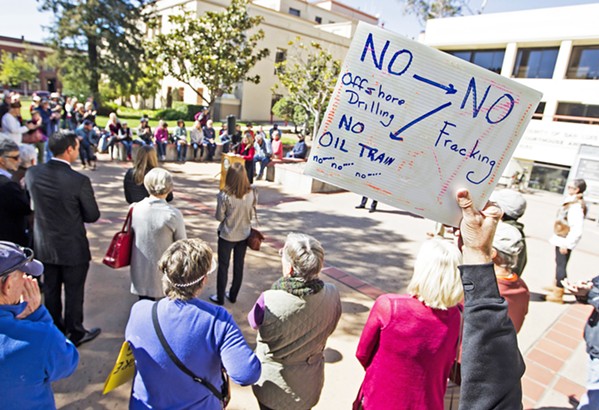 These local areas—and more than 1 million acres across eight counties—became the focus of public concern in August, when the BLM started work on a court-ordered environmental report to study the effects of hydraulic fracturing, or fracking, on these properties.

The actual scope of the BLM's review had been somewhat hazy to the public until nonprofit Los Padres ForestWatch asked the agency for its raw mapping data to show a more precise picture of the proposal. That picture included property near schools, state parks, city open spaces, national monuments, and historic and cultural landmarks.

"It's really allowing the public to understand more clearly what exactly BLM is proposing," said Jeff Kuyper, executive director of Los Padres ForestWatch. "We're finding that really outlandish parcels are being opened for drilling and mining."

In response, 8,399 letters and emails poured into the BLM's Bakersfield office during a public comment period between August and September, despite complaints from U.S. Rep. Salud Carbajal (D-Santa Barbara) and others that the 30-day time frame was too short.

"The 24th Congressional District has an abundance of ecologically sensitive areas and significant agricultural resources interwoven with vital water aquifers and numerous active fault lines," Carbajal wrote in his comment to the BLM. "The need to understand and properly comment ... requires more analysis from local governments and residents than provided for in 30 days. Hydraulic fracturing is a controversial practice and one that I and many of my constituents oppose in SLO, Santa Barbara, and Ventura counties."

The BLM declined Carbajal's request, pointing to Executive Order 3355 issued by the Department of Interior in August 2017 that directs the agency to streamline projects through the environmental review process within one year.

Yet hundreds of SLO and northern Santa Barbara counties' residents commented on the review, with a majority expressing concern or direct opposition to fracking on public lands, according to a summary report published last month by the BLM.

"I urge you to abandon this misguided proposal," North SLO County resident Holly Sletteland wrote in her comment. "Additional oil development will only accelerate the disastrous effects of climate change. ... Our public lands should be used to benefit the public—not private energy companies that are interested in short-term profits."

Jim Turner, a resident of Lompoc, said any study of fracking must include analyses of its visual, biological, geological, and groundwater impacts.

"The earthquake swarms that now plague Oklahoma should be a very ominous warning about fracking, no matter what kind of an [environmental report] is prepared," Turner wrote in his email to the BLM. "It had better be bulletproof in earthquake-prone California."

Out of the commenters in New Times' coverage area, SLO city residents made up the highest percentage of submissions, followed by residents of Lompoc, Solvang, Los Osos, Santa Ynez, and Arroyo Grande.

The BLM also received feedback from the cities of SLO and Lompoc, and the counties of Santa Barbara and Ventura (but not SLO County). SLO city registered objections to the inclusion of parcels near the Irish Hills Natural Reserve and Reservoir Canyon Natural Reserve—open spaces held "strictly for conservation and passive recreation purposes," according to SLO Natural Resource Manager Bob Hill's letter to the BLM.

Hill also cited a 2010 memorandum of understanding between the two agencies that stated the BLM would withdraw its Irish Hills property "from mineral entry."

"The city respectfully requests that these parcels be removed from further evaluation," Hill concluded.

The city of Lompoc shared its concerns about property being included in the BLM's review, including parcels the city owns, the Allan Hancock College campus, and the federal prison in Lompoc. The city also raised concerns about the water, seismic, and biological effects of fracking.

The agency is expected to release a draft environmental impact statement in February. Federal officials will hold two meetings on the Central Coast to gather in-person public feedback, according to the BLM's report. BLM officials were not available for comment due to the partial government shutdown.

While the BLM has not issued a new oil and gas lease on public lands in California for several years, many are concerned about a pivot under President Trump.

"The troubling aspect of it is this analysis is now being done under an administration that's shown time and again outright support for opening more public lands for oil drilling and shirking the public's ability to provide input during the process," Los Padres ForestWatch's Kuyper said. "It remains to be seen whether the BLM's analysis will be adequate." Δ