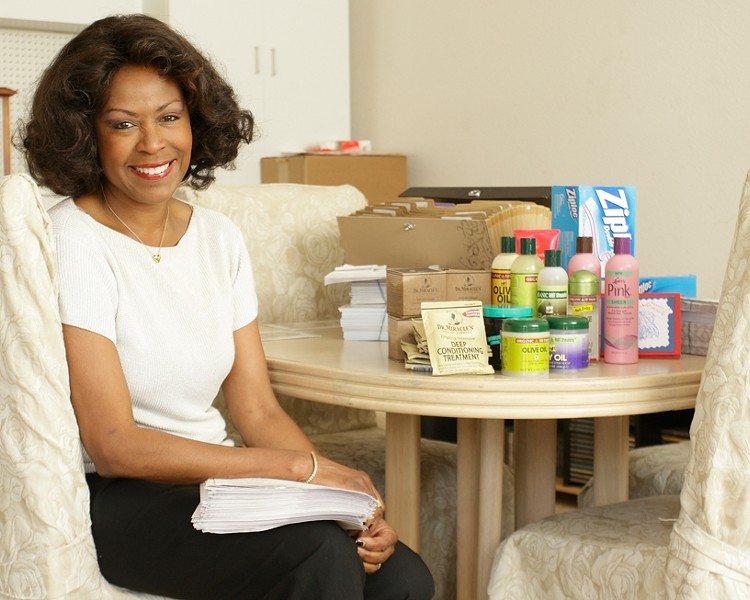 Pressed, relaxed, extensions, braided, weaved, and even shaved: Myraline Morris Whitaker’s hair has been through it all. And now she is helping African American servicewomen in the Middle East groom theirs, through the Sister Soldier Project.

“All of those things you’ve heard about black hair, I epitomize,” Whitaker said.

Since November 2006, the Sister Soldier Project has sent packages filled with hair-care products made specifically for ethnic women, along with other toiletry items, to female soldiers serving in various places in the Middle East.

Whitaker has never served in the military. But when a woman shared a story about having to leave the room when her black roommate did her hair, it hit home.

“I’m sure her roommate was using a ‘hot comb’ and the room smelled like burnt hair,” she said. “It was a defining moment for me. I was just floored that this woman was trying to look her best without the proper products.”

Whitaker explained that the military requires women to wear their hair a certain way; sleeked back and “tucked in.” This is a very difficult request to ask of black women’s hair without the proper products. “The military expects a certain look and they just can’t comply,” she said. “Without the proper products, their hair cannot be pulled back into a ponytail, not even close.”

Whitaker soon realized that hair care products weren’t the only supplies the women were missing in the Middle East, and began to include magazines, books, DVDs, toiletries, and feminine hygiene products. “We have packing parties to raise money for postage, she said. “The cost to send a package to an APO address in the Middle East is $10.35. We have packing parties all over the country. People bring money to help cover the postage, and toiletry items.”

The first packing party took place in April 2007 in Los Angeles; since then the Sister Soldier Project has forwarded more than 1200 care packages and is averaging 10 to 15 a week. Packing parties usually take place once a month.

“I think out of the 1200 packages we’ve sent we have helped thousands of women,” Morris Whitaker said. “I get these wonderful thank you e-mails that just keep me going and keep me energized.”

As a consultant to the hospitality industry, Morris Whitaker can’t spend all of her time making care packages. The Sister Soldier Project’s home base is Grover Beach but people throughout the country can help send the products to the women soldiers and host their own packing parties.

“If you have a soldier you know you can ship to them or if you don’t we will find one for you,” Whitaker said. “It resonates with so many people of all colors, men and women.”

Morris Whitaker is amazed at the success of Sister Soldier Project. “I’ve never served, I don’t even know anyone who has served, I don’t know what it is like,” she said. “But I do know as a black woman, I don’t want to be anywhere without some hair care.”

To read letters and view photos from recipients or for more information about the Sister Soldier Project, visit sistersoldierproject.com.

Sign up early for the South Bay Women’s Network luncheon, meeting at the Inn at Morro Bay, located at 60 Morro Park Road, on April 7 at noon. SBWN is a nonprofit organization open to all women in all job levels, from all walks of life who wish to share ideas, network, support one another, and meet other women. The event on April 7 will include an annual installation of the newly elected SBWN board of directors and will recognize past officials. Tickets cost $16-$17 and include lunch. Reservations are recommended at least a week ahead. Info: 595-7296 or sbwn.org. …

The Broad Street Giant Grinder Shop will offer “lite” grinder sandwiches for “whatever you can afford to pay” on April 13, the Monday following Easter, as a gesture to help people who are struggling in the recession. “Hey, times are tough, but that doesn’t mean you can’t enjoy a quality grinder from our shop. Just pay what you can then, and enjoy!” co-owners Sherry and Brad Fuller said. And if they receive great feedback and local support, they might consider repeating the offer.
The shop is located at 1901 Broad Street, on the corner of Broad and Upham, in San Luis Obispo, and is open from 10 a.m. until 5p.m. Feel free to call in orders at 543-6700.