Sensory breakthrough: Tastry takes small wineries to the next level, while making SLO County the epicenter of wine innovation

Photo Courtesy Of Parker Sanpei SENSORY DISCOVERY It was a just a day in the lab when former Cal Poly chemistry student Katerina Axelsson unlocked the wine flavor matrix, leading her to launch the wine business into the future.

Visit Tastry, a SLO-based sensory science company, at tastry.com, try the kiosk at California Fresh Market in SLO, or download the free BottleBird app at bottlebird.com, Google Play, or the App Store.

Katerina Axelsson was tinkering in a wine lab when she unlocked the flavor matrix for wine.

She's always been fascinated by human biology—particularly biotech—and relocated from Southern California to Cal Poly to pursue a chemistry degree, before getting a master's degree in bioinformatics.

So naturally, data science professor Alexander Dekhtyar, who oversaw Axelsson's master's program, canceled the rest of his classes for the day when young Axelsson presented him with technology that could change the way we drink wine.

The big discovery came about five years ago, when Axelsson was in her last year at Cal Poly. She worked at a custom grape crush operation to pay for college, and between making quality control chemistry samples, she came up with a hypothesis about the subjective nature of wine. It could be better for consumers and wineries with a correct formula that accounted for the sensory aspects of wine and an individual consumer's tastes. She ran her own experiments late at night, after work. Within a year and a half, she developed a completely new chemistry methodology for tasting wine.

"I was trying to see what I could predict from that chemistry," she said.

That half-hour meeting with Dekhtyar turned into a four-hour meeting. He invited two other professors into the office. After arguing ideas and drawing diagrams on the board, a partnership with professor Dekhtyar was born.

"I realized later that the data is so rich. Like for one bottle of wine, I have so much data that you don't need to use traditional recommenders that aren't as good," she said.

Axelsson, now 28, is the founder and CEO of Tastry: a sensory science company with a patent pending on its artificial intelligence (AI) technology. The technology has been applauded by leaders in entrepreneurship and technology, and seems to be the logical next step in wine. With about 30 employees now, Tastry's technology is already sought after. But Axelsson wanted to stay in SLO County, and she wants to help small to medium wineries grow with her new technology. She already has thousands onboard.

In April of this year, Axelsson and her Tastry team launched BottleBird, an app designed to pair wine enthusiasts with artisan wines using Tastry's sensory science. The app provides personalized recommendations and locations where the wines can be purchased. By generating chemical fingerprints of consumer goods, Tastry matches products to an individual's preferences.

I tried it out, downloading the app and taking a 30-second survey on my phone.

Do I like the smell of mushrooms and tobacco?

Do I like the taste of green pepper, vinegar, and black coffee?

Bottles appeared with the percentages of match to my taste preferences. There were quite a few I had already tried and loved. I suppose it's OK to admit, even after the wine snob movie Sideways, that I should, apparently, be drinking more merlot. I can also modify my search by price, style, taste, occasion, varietal, pairing, and region. 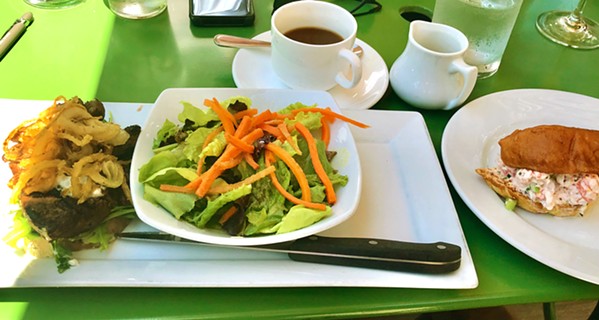 "Most recommenders are using collaborative filtering," Axelsson said at a recent lunch on Novo's patio.

Amazon and Netflix use collaborative filtering, she explained, which is great for viewing, but doesn't work for something like wine. She said the Tastry method looks at wines each individual likes and dislikes because wine behavior is very different from the way we buy other things.

"I know that if I go out with my female friend to dinner, and even though we're in the same demographic and have the same income and like the same music and buy the same toaster oven that she could love the oaky, buttery, chardonnay and I could totally hate it, and there's nothing in the data that could predict that," she explained.

Through strategic partnerships, Tastry developed the AVEC (Artisan Vintners Expanded Clubs) program to provide boutique wineries with the opportunity to immediately expand the geographic coverage of their wine club to 44 states. Most small and micro wineries in the U.S. have limited geographic coverage for their clubs due to the costs associated with state regulations. Once a winery has signed on with Tastry, they can opt in to the AVEC program, which provides access to online retailers such as BottleTribe to fill their immediate and long-term need of expanding their existing wine club programs.

"As a result of customized programs and solutions we have developed to meet the needs of artisan wineries seeking DTC [direct to consumer] sales, we are experiencing greater than 100 percent month-over-month growth," Axelsson said. "It's the future. It really is."

She added that wineries that were typically slow to adapt to new technologies are now seeing it as a necessity. The timing is just right, Axelsson said.

Another Tastry initiative, PAVE (Protecting Artisan Vintners through E-commerce), connects boutique wine brands with new customers. Tolosa Winery in SLO is one of many SLO County wineries involved in the program and is benefiting from higher sales.

Industry-wide, wine sales rose 25 percent during March and DTC sales from wineries rose by 18 percent, according to Sovos ShipCompliant, an alcohol compliance software company. However, larger wineries with national distribution were the ones benefiting. With Tastry's PAVE program, artisan wineries no longer have to rely solely on tasting room and wine club sales, Axelsson said.

"At the end of the day, it's all about helping people find the wines they're going to love and helping wineries find the people that will love their wine," she said.

Tastry's Chief Business Officer said decoding the flavor matrix was the core of Axelsson's discovery, and it was something that other tech companies had unsuccessfully tried to do.

"They didn't realize that problem that needed solving," Axelsson said.

Axelsson has always been an entrepreneur, and modestly describes herself as a "cerebral child." She immigrated from Russia when she was 8 and grew up in Southern California. At the age of 10, she invented a game complete with detailed ledgers where she and her friends would simulate the buying and selling of goods. In high school, she was the president of the chess club and a state champion in speech and debate. While completing her bachelor's in chemistry, she actively participated in the Vines to Wines, Biomimicry, and Entrepreneurship clubs at Cal Poly. A foodie, Axelsson said that one of her favorite dishes in town is La Locanda's lasagna alla Bolognese made with béchamel sauce.

So the next time you head on over to California Fresh Market, look for the Tastry kiosk. Take the little quiz. Find your perfect wine. Δ

Correction: This article has been edited to correct information about the status of the patent for Tastry.