At first they might not comprehend, believing the dancers are shaking the floor. Then as the building begins to tremble, the customers race for the door. Ceiling tiles fall as the lights blink and shatter.

Such a scene was caught on film when the recent earthquake in Chile destroyed a nightclub in Concepcion, a town close to the massive temblor’s epicenter. It could happen here, perhaps with even more tragic consequences. For example, a popular San Luis Obispo nightclub, Downtown Brew, is in a brick building, just the sort of unreinforced masonry structure that tends to crumble during a strong earthquake.

But the SLO City Council voted unanimously Feb 16 to give that building’s owner, as well as those of seven other properties, a five-year extension until July of 2015 for retrofitting their structures to meet earthquake standards. None had reinforcement. At the same time, the council gave the owners of nine other buildings only until July to finish reinforcement. Most of them had taken steps toward bringing their buildings up to code.

What’s the difference between the two groups of owners? The owners given the five-year reprieve are mostly major developers who will buy property from the city and presumably put millions of dollars into the city’s coffers. Most of the building owners subject to the looming deadline are small business proprietors.

Council watchers say the five-year reprieve for developers reveals how the council caters to big money while shunning the needs of small businesses, many of which are struggling to survive the economic downturn. The July deadline has forced many building owners to evict small business tenants to clear the way for retrofits at the worse possible time.

One building owner who is in the July 2010 deadline group is Mike Spangler, a strident critic of the city’s earthquake mitigation program.

“I don’t believe that these steps make these buildings any safer,” said Spangler, sitting up against an old brick wall in the office of a building he owns on Marsh Street. “I think it probably makes the buildings more dangerous, otherwise I would not be sitting here under these walls.”

Spangler said he believes the retrofit the city requires—installing inner supports to stabilize brick buildings and securing the roof to the walls—makes the structure less flexible and therefore more likely to collapse in an earthquake.

Alex Benton is a businessman who’s been hit hard by the earthquake retrofit requirements. He already had to demolish a building because it would have cost too much to reinforce, and he evicted two businesses in his property on Garden Street to enable him to do the retrofit. The loss of $5,000 a month in rent has complicated getting a loan for the $200,000 to $300,000 he needs to bring his building up to code. 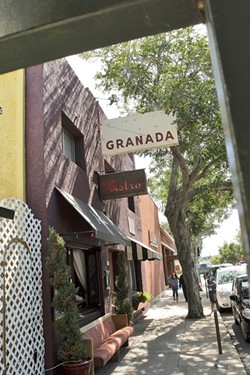 Nearly all the building owners who face the July 2010 deadline have turned out their tenants to clear the way for retrofitting, or have sold their structures.

Kimberly Walker, owner of the Granada Bistro and a Borracha, a small business next door, has been told she will probably have to move her shops now located on the bottom floor of the Granada Hotel on Morro Street. She is not sure if the building will be retrofitted or simply torn down (the owner did not return calls from New Times).

“I put a lot of time and effort into improving this stretch of Morro Street,” Walker lamented. “This is a bad time to get shut down, obviously.”

Walker said though she was sad about the prospect of moving, she felt much worse about the people who live in the apartments above her. They will lose their homes.

Neal Breton, owner of San Luis Art Supply, has his business in the same building as Walker’s and faces the same fate. “It just feels like a big squeeze-out,” said Breton. “Sometimes it feels like a conspiracy to get rid of small mom and pop business from downtown and replace them with Baby Gap or some other corporate chains.”

City politicians and staff say the Granada Hotel building and the other structures on the July deadline list must be dealt with soon because of safety concerns. They claim most of the buildings given a five-year pass will be demolished or rebuilt by the time the Chinatown and Garden Street Terraces developments start construction.

By the city’s estimates, the Chinatown project will not be built until sometime between 2012 and 2014 and Garden Street Terraces, which is still in the review process, not until 2014.

One of the buildings given a five-year pass houses Downtown Brew. Large signs posted on the door warn people they are about to enter a unreinforced masonry building.

San Luis Obispo councilman John Ashbaugh said the Downtown Brew situation worries him and he would like the developers of Garden Street Terraces, who own that building, to improve its earthquake readiness before the proposed development is approved.

San Luis Obispo Mayor Dave Romero said he is fully aware of the issues and hazards involved in the decision the council made when they voted on the earthquake timetables. “It’s a risk,” said Romero. “I realize it may not be entirely logical.”

Romero said the council did not want to force developers to make retrofits who were already stretched economically and then tear down the buildings when they develop the properties.

“We are trying to help major developers who are putting a lot of money into this city,” Romero said.