Find Sequel Cold Brew Tea on Thursdays at the Downtown SLO Farmers' Market, and on Saturdays at Benny's Kitchen, located at 977 Foothill Blvd., unit 109. Check sequeltea.com to learn more about when the next pop-up is.

Before he came to San Luis Obispo to attend Cal Poly, Justin Chan was used to having easy access to great boba tea whenever he wanted it. He hails from the Bay Area, which is known to have some of the best boba in America.

But when he got to SLO, he found his options lacking. There are only a handful of shops here that sell the popular iced drink with sweet tapioca pearls, so Chan decided to make it himself. 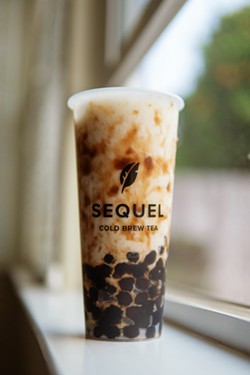 "I would make boba for friends every finals week," Chan said. "People would invite their friends and we'd have like 50 people in the Poly Canyon Village dorms. They loved it. People were saying my boba was better than some of the boba up in the Bay Area."

As a pre-med student with plans for physician's assistant school one day, Chan first saw his boba making as just a hobby. But that hobby soon turned into a side hustle, as Chan started doing pop-ups and his boba business became profitable. Then, he had an idea.

"When I was just starting, I was just doing normal boba," Chan said. "It was the summer of 2020 when I was lying in bed, and cold brew tea came to mind. In the grocery store, you see a bunch of cold brew coffee, and I was like, 'Why isn't cold brew tea a thing?'"

Chan, who graduated from Cal Poly in 2020, was working full-time as a medical assistant when he had his burst of inspiration to make cold brew tea. He started perfecting his product and selling it at pop-ups every weekend. 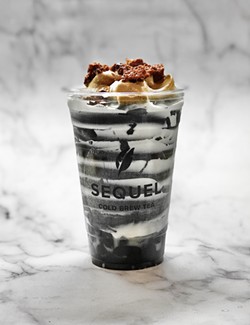 Sequel currently sells boba tea at the Downtown SLO Farmers' Market every Thursday, and Benny's Kitchen on Foothill Boulevard every Saturday from noon to 2:30 p.m.

The benefits of cold brewing tea comes down to bold flavors, higher antioxidants, and no bitterness, Chan explained.

"When you use the full leaf, you have the full body of it and it actually maximizes through cold brewing," Chan said. "Because it's a much gentler approach, you get to pull out the aromatics of the tea." 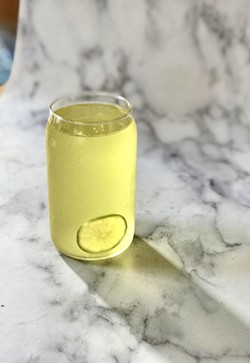 It took Chan a lot of trial and error to perfect the process. He went through six different vendors and about 60 different teas, trying different brew times for each one until it was just right.

Chan sources his tapioca pearls from a special vendor in Taiwan, known as the boba capital of the world. These boba pearls are bigger than average and sweeter.

"Sometimes I'd go to a boba shop, and the tea is sweeter than the boba pearl. I found that balance left me a little unsatisfied," Chan said. "I liked it better when the tea was lightly sweet, and the pearls were really sweet, so that's what we do."

"I'm thankful that people get to come out and try our drinks," Chan said. "It's pretty crazy on Thursdays—we've blocked the street at Farmers'. We have to have our line behind our tent on the sidewalk."

As much as he's enjoyed seeing business thrive, the creative process is what drives Chan's passion.

"I think a lot of people go into a boba business strictly because they want to make money," he said. "When I started boba, I just wanted to create new flavors."

Exclusive to Sequel's Saturday pop-up at Benny's Kitchen is the Squid Game drink, inspired by the popular Netflix series.

"It's a dark roast oolong tea, and we put in activated charcoal, just for an aesthetic, to make it look like squid ink," Chan said. "Then we add in some Dalgona coffee and Dalgona candy crumble on top."

"I have about 20 drinks in my arsenal that will be pushed out," he said.

Chan said he's excited to keep doing what he loves the most: Bringing people together to enjoy excellent boba tea.

He has dreams of opening a brick-and-mortar storefront one day.

"It's so rewarding just to see people sitting down, having a one-on-one, and catching up, whether it's been two weeks or two years," Chan said. "And for a drink to be a medium for that." Δ

Staff Writer Malea Martin is bringing her reusable boba straw to the Downtown SLO Farmers' Market next week. Reach her at mmartin@newtimesslo.com.