'Serenity': A neo-noir vibe with a twist that falls flat

Writer-director Steven Knight (Redemption, Locke) helms this thriller about fishing boat captain Baker Dill (Matthew McConaughey), whose tranquil life is disrupted when his ex-wife, Karen (Anne Hathaway), finds him and weaves a desperate tale about her abusive new husband, Frank (Jason Clarke), who's not only threatening her, but her and Baker's son, Patrick (Rafael Sayegh). Karen's solution is a fishing excursion that will leave her new husband to the sharks. Is Dill in? Is Karen's story all it seems to be? (106 min.) 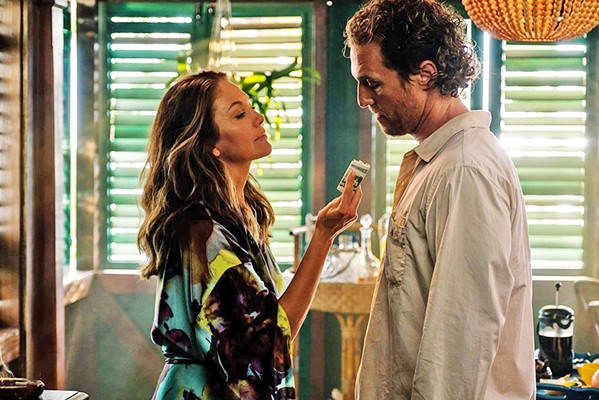 Glen I'll give Serenity this: It's very original! It's got a twist you can tell is coming, but when it comes, it's not what you expect. Unfortunately, it's also not very fulfilling, and if you think too hard about it, it makes very little sense. The real question, I guess, is whether the first two-thirds of the film are interesting enough to suffer through the last third. The heart of the story is Baker Dill, whose real name is John. He's hiding out on Plymouth, a tropical fishing island, where he takes tourists out on his boat, Serenity, so they can get drunk on beer and maybe—if they're lucky—snag a tuna. Dill's problem—well, one of them—is his obsession with catching a giant tuna he's named Justice. Paying customers be damned, if he thinks Justice has been hooked on one of his lines, he's going to reel him in. He's had the giant fish on the hook four times, but every time he thinks the fish is played-out and ready to be gaffed into the boat, it snaps the line and escapes. On shore after a day of fishing, Dill hooks up with his regular lady, Constance (Diane Lane), in a sweaty tryst that ends with Constance giving Dill enough money to fill his boat with petrol and himself with rum. Think of the film's vibe as beach noir. When Dill's ex, Karen, shows up, Dill has to decide whether to help her kill her abusive husband, Frank, who's a real lout. Sure, he deserves it, but Dill—an Iraq War vet—is a decent man, not a killer. The linchpin is Dill's son, Patrick, a sensitive computer prodigy who, like Karen, is under threat. As a lover of good film noir, I was game to take this twisty ride into Dill's and Karen's lives, and there are some gritty, tense moments conjured up by Knight, but atmosphere alone isn't enough to save Serenity, which ultimately flounders under the weight of its third-act twist.

Anna Personally, I was pretty disappointed with the twist; while I knew something was coming, I had higher hopes than what the storyline landed on. Dill himself is a complicated and interesting character, a brooding loner with a past he's desperate to leave behind, with the exception of the memories of his son, now a 13-year-old living in a whole different world with Karen and her dickish, abusive husband. Plymouth Island, where John-turned-Dill has landed, is the exact right place to get lost. The small, close-knit community watches over one another. If anyone knows your business, everyone knows it, but there's really no law enforcement around to stop bad behavior. While Dill keeps everyone at arm's length, the townspeople won't stay away from him and seem to genuinely want the best for the salty seaman. Karen's arrival is a chink in his chain, both exposing his past life and bringing fresh moral dilemmas to the surface. While at first Dill refuses to entertain Karen's proposal, when the payoff becomes his son's life and happiness instead of money, Dill can't help but consider the idea. At about this point, the plot twist is revealed, and while I don't want to spoil it for potential viewers, I will say that this is where I started to lose interest in both the storyline and characters. Upon reflection, it makes less sense now than it did then. Instead of being a puzzle the audience has to suss out, it's just a confusing mess of pieces the filmmaker didn't work to fit together before letting them fall. 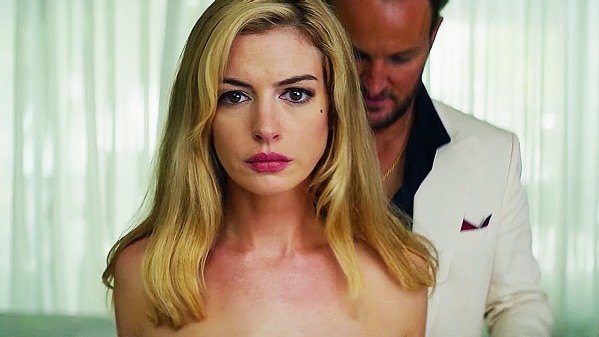 Glen This is only Knight's third feature film that he's written and directed. Redemption (2013), starring British action star Jason Statham, is one of the actor's less inane films—it's smart and action-packed without being silly. Locke (2013) was even better—a taut thriller that takes place almost entirely in a car with Tom Hardy in the titular role. He talks on the phone to his boss, a work colleague, his wife, his two sons, medical personnel, local authorities, and his former one-night-stand who's going into early labor with his child. Knight's also written a bunch of interesting films—Dirty Pretty Things (2002), Eastern Promises (2007), The Hundred-Foot Journey (2014), Pawn Sacrifice (2014), Burnt (2015), Woman Walks Ahead (2017)—and was the creator behind the TV series Taboo and Peaky Blinders. This film, however, doesn't manage to gel. After the twist, it's hard to stay invested in the characters, and some of the various foreshadowing—for instance a suit-wearing character named Reid Miller (Jeremy Strong) who keeps trying to give Dill an electronic fish finder, or the strange telepathic connection Dill seems to have with his son, Patrick—seem out of place. Looking back on it all, I wonder what the point of Dill's relationship with Constance is—it goes nowhere. Like I said, if you start thinking about how it's all supposed to fit together, the story crumbles. If you like twists, maybe this film is worth it to rent or to stream, but frankly, I think it's a failure. Save your money!

Anna Agreed, this one falls flat and with a pretty resounding thump. McConaughey and Hathaway are both talented actors—he's an ace at the kind of outsider Dill is supposed to be, and she's the elegant but shattered piece of candy for her abusive spouse. They pull off the characters, but unfortunately the script, as twisty as it tries to be, fails at being interesting and leaves a lot of gaping holes too big to ignore. I was a big fan of Locke and many of the projects Knight has worked on. Hopefully Serenity is just a blip in his career of fine filmmaking. I'd even argue that this was shot well, the green tropic scenery and beautiful blue sea with dazzling whites against moments of darkness and lingering stark contrast in shots were visually rather interesting. The problems all came down to the storyline and the unique-but-off-putting twist that left me rolling my eyes. Maybe this pops up on your home system in the future. Nothing else on, why not watch? But like my paramour said—save those bucks to see something else. Δ