Atascadero voters will choose whether to support Measure D-20 on Nov. 3. The Essential Services Transactions and Use Tax is a 1 percent sales tax designed to fund emergency services and some general city services.

If passed, the measure's funds are expected to bring in nearly $4.5 million annually, with yearly independent audits to ensure the money is spent properly.

Residents throughout the county are seeing similar measures to fund specific needs in their communities this election season. But Atascadero differs from other cities trying to pass a 1 percent sales tax because it takes in the lowest general fund revenue per capita in the county. 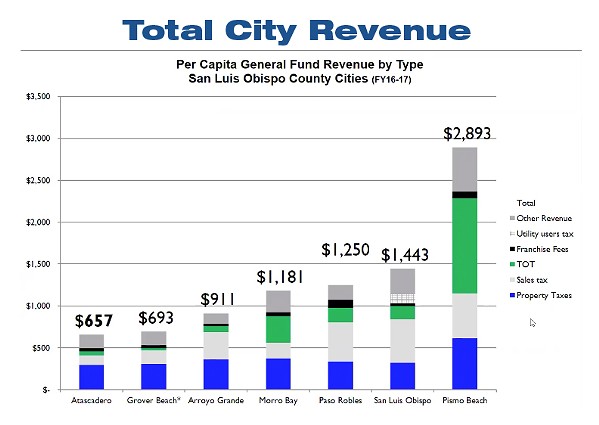 The city receives roughly $657 per capita compared to its northern neighbor Paso Robles, which collects $1,250 per capita, or its southern neighbor San Luis Obispo, which gains $1,443 per capita. During the Atascadero Chamber's virtual Coffee Talk event, City Manager Rachelle Rickard presented a graph that showed city tax revenue in order of lowest to highest per capita revenue. Atascadero was the lowest and Pismo Beach was the highest—bringing in nearly $2,900 per capita.

A city's revenue comes from a combination of sales tax, transient occupancy tax, utility users tax, a percentage of property taxes, and other miscellaneous areas—such as parks and recreation program fees, for example. Atascadero doesn't bring in a lot of sales tax or transient occupancy tax revenue, and the city says it's taking a toll on the services it can provide.

To fill the funding gap, the city started the process of creating Measure D-20 in November 2019, according to Ron Overacker, president of the Atascadero Police Association.

"COVID couldn't have come at a worse time for all of us, but in the life of this specific measure, before COVID we were desperate and were needing it. Now, it just makes it that much harder for all of us," Overacker said.

"The population has doubled and yet our minimum staffing expectation is still at one supervisor and two officers. The number of calls for service has increased dramatically, and the expectations on police over that course of time have continued to rise dramatically," recently retired Atascadero Police Chief Jerel Haley told New Times.

The state average calls for departments to have about 1.4 to 1.8 officers per 1,000 residents in a given community. Atascadero currently has less than one officer per 1,000. The department ran at a minimum staffing level 52 percent of the time in 2019, Overacker said.

"We need more officers to adequately protect the city of this size," he said.

Without future funding, the department might have to change its services by routing certain calls for service to an online reporting system rather than being able to speak with an officer.

Retired Chief Haley also said that a legislative push in California has had a "net result of pushing more calls for service" to the local level.

He said Proposition 47, the Reduced Penalties for Some Crimes Initiative (2014); Proposition 57, the Public Safety and Rehabilitation Act of 2016; Assembly Bill 109, Criminal Justice Alignment (2012); and others have impacted emergency response for law enforcement because there are a larger number of individuals "out on the streets who are engaged in criminal activity who would have otherwise been in custody."

"So it falls on law enforcement to go out, day after day after day, and deal with the same individuals over and over again. Especially now with COVID-19 where court dates are pushed out 120 days," Haley said.

The Atascadero Fire Department is also falling below the national average of 1.5 firefighters per 1,000 people—the department currently has 0.6 firefighters.

Adapting to growth, the fire department has continuously looked for grants to assist with operations. It successfully secured one grant, which funded the promotion of a fire captain to battalion chief. The management level position, Fire Chief Casey Bryson said, increased the department's abilities in administration, emergency response, safety, and supervision.

However, funding for the position ends next October, which means Atascadero could lose the fire battalion chief unless the department can find another funding source.

"This position greatly improves our ability to command and mitigate large incidents and provide for the safety/supervision of the on-duty engine companies," he said.

The department also lacks the resources to keep the two fire stations up to date and maintained. Fire Station 1 is 70 years old, doesn't meet requirements for an essential services building, and is not earthquake retrofitted, Bryson said.

"We've been operating for so long, every now and then finding little bits of money or getting large donations—such as when Bertha Scholtz donated her $1.3 million after she passed to our department, and that allowed us to buy a new engine," Roberts said. "It's kind of those crutches that somehow appear at the right time."

Both public safety association presidents agreed: There just isn't any wiggle room in the city's general fund to move money around, and there aren't any more reductions that can be made.

"I've got to give it to our finance department and our city, they do a pretty good job of working within their means and efficiently," Roberts said. "We also don't have big-box stores such as Costco or Walmart or Target to help bring in revenue."

Measure D-20, he argues, is an investment in the community as it continues to create and follow through with projects such as the La Plaza development, which will bring in businesses and more sales tax revenue. In the meantime, though, he said, the measure is needed.

If approved by voters, the Atascadero City Council already set a schedule of 20 meetings, from January to June of 2021, and study sessions to receive input from the community for the expenditures and priorities of the potential increase in funds. The city's existing Citizens' Sales Tax Oversight Committee will meet jointly with the city's Finance Committee to review the city's full general fund expenditures, including funds generated by the proposed measure. Δ