Residential vacation rentals in Paso Robles, aided by North County’s tourism boom and internet tools like Airbnb and VRBO, are starting to legitimately compete with the city’s hotel industry.

In 2016, Paso Robles netted $240,000 in transient occupancy taxes (TOT) from licensed vacation rentals. While that’s minute compared to the $4 million collected from the commercial lodging market, the city believes that there are more than 100 additional short-term rentals operating in city limits without a license.

Concerns about that lost tax revenue, a sense of unfairness felt by licensed operators that not all businesses are playing by the rules, and Paso residents’ qualms about how short-term rentals are impacting neighborhood wellness set off a lengthy process in 2015 to develop an ordinance to regulate the market. In May 2016, the city assembled a “community task force” of stakeholders to meet eight times over a four-month period to help in crafting the regulations. 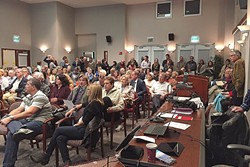 The fruit of those efforts—a draft short-term rental ordinance—was unveiled before the City Council for the first time on Jan. 31. The meeting served as an opportunity for residents to share their thoughts on the draft and for the council to give recommendations before it advanced to the Planning Commission. While community members applauded the efforts of the task force, the City Council decided to scrap portions of the ordinance, like parking and occupancy restrictions.

Under the draft ordinance, short-term rental operators would be required to obtain both a business license and a rental license from the city and pay upfront application fees as well as the 10 percent TOT on gross sales.

To improve neighborhood compatibility, the ordinance requires that a “Good Neighbor Brochure” (made by the city) be distributed to renters to inform them about Paso Robles’ rules on noise, occupancy limits, parking, trash, recreational vehicles, and more.

For accountability, the regulations include the introduction of a vacation rental hotline for neighbors to call to report a complaint about a particular vacation rental. The call would get forwarded to the owner or agent responsible for the house, and the owner would then have 30 minutes to respond to call. If he or she doesn’t, the complaint would be forwarded to the police department. Problematic rentals with accruing violations would go onto the city’s “watch list,” according to the ordinance, and if the violations continue, the city could issue citations and/or revoke the license.

At the meeting, there was an overarching expression of support for the policy—which was a surprise to Mark McConnell, a Paso resident who served on the community task force that deliberated over the regulations.

“I was expecting a lot more raised fists and angry people in the audience,” McConnell told the council.

But level-headedness and civility didn’t stop councilmembers and residents from voicing several concerns about elements of the policy.

City Councilman Fred Strong was the most vocal skeptic of the framework proposed, particularly the occupancy restrictions that were initially included. The ordinance had stipulated a maximum of four overnight guests in a one-bedroom house, and up to 12 guests in a five-bedroom house. Strong felt that the occupancy rules shouldn’t be stricter than what’s allowed in any city home.

“Some of these occupancies don’t seem to make sense,” Strong said. “I think this is really overboard.”

The burden that the fees and taxes would impose was also an expressed concern. Rental operator Danielle Lloyd told the council that her rental supplied a “big chunk” of her family’s income. She said it was important for the council to make sure the tax dollars would benefit residential neighborhoods somehow.

“When we start paying this, what are we going to get as the little guy versus the Hampton Inn?” she said. “You’re putting us in with all these huge hotels in ‘leveling the playing field.’”

Taxes from the lodging industry are funneled into the city’s general fund. The City Council has discretion to spend general fund monies for a variety of needs like parks and recreation, road maintenance, or essential city services like fire safety, which Paso has struggled to finance. The city recently saw the sudden departure of its two top fire chiefs, largely due to budget concerns.

Other speakers at the meeting, like Crystal Bradshaw, who runs two short-term rental homes in downtown Paso, felt that the rule requiring owners to respond to neighbor complaints within 30 minutes was too stringent.

“I don’t think that’s realistic,” she said. “You’re going to get a lot of police officers called.”

While the proposed ordinance doesn’t set density restrictions (for example, regulating how many short-term rental homes can be licensed in one block), Dan Jones, a member of the community task force, recommended that the council consider it.

“In our research, we did find a number of cities that had started off not having density language [and] have come back around to looking at that, seeing that that might’ve been a mistake,” he said.

City Councilmember Jim Reed also spoke to the density issue, expressing a desire to discuss the broader impact of short-term rentals on the availability of housing for those who want to live in the city as full-time residents.

“Are we going to have every house on the west side be a bed and breakfast? What about housing for people to live here?” Reed said. “I’d like to see a conversation about that.”