In addition to the music, which I’ll get to in a minute, the event features a noon to 4 p.m. beer tasting on July 11. Last year they had 35 participating breweries. Food vendors include Higgie’s World BBQ, The Grilled Cheese Incident, India Gourmet, and more. If you’re camping, you won’t even have to bother with making food. 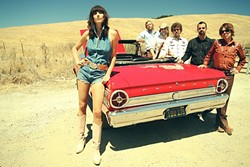 There are also a bunch of activities, from music workshops to morning yoga sessions to park ranger-guided hikes. Camping possibilities include tent, trailer, or RV camping. All the details as well as three-day or daily passes are available on the festival website, sevensistersfest.com.

The music starts at noon on Saturday, July 11, with award-winning world music act Todo Mundo. Harper & Midwest Kind follows at 1:50 p.m. with some Aussie world blues and roots. San Francisco rock band The Stone Foxes will knock you out of your socks at 3:25 p.m. followed by psychedelic voodoo rockers The Delta Saints at 5 p.m. The Congress with its rock, old-school soul, and outlaw country takes the stage at 6:35 p.m. Headlining Saturday is The Suffers, a 10-piece classic soul and rock act featuring Kam Franklin’s potent voice.

On Sunday, July 12, gifted singer-songwriter Keith Greeninger starts things off at 10 a.m. (Yes, Bloody Marys will be available). Soul and blues ax man Hadden Sayers is up next at 11:15 a.m. The Mother Hips brings its Cali rock to the stage at 12:50 p.m. Sunday headliner Nicki Bluhm & The Gramblers close the festival with a show starting at 2:30 p.m. Bluhm’s breezy earnest pop rock melds ’60s optimism with moments of lush gospel soul or country sweetness.

“Loved Wild Lost is a sincere and sophisticated collection of songs steeped in tradition, but of its own time,” Bluhm said of her new album in press materials. “After three solid years of playing as a band across the country, we have had time to learn, reflect, and grow. This album displays a departure into the deeper and more contemplative themes of people in transition and the struggle to retain the energy and optimism of youth as life becomes more complex.”

The songs are propelled along by Bluhm’s bell clear voice, but the band’s musical soul is Bluhm’s husband Tim, who fronts The Mother Hips, playing right before The Gramblers.

“The longer something moves away from its inception point, the more it takes on a life and a narrative of its own,” Tim, the band’s musical director, added. “In these songs, I think you can clearly hear that happening; idealism and optimism losing control to the forces of inertia and a life of constant traveling. Happiness becomes an intention and love becomes a long-term study of oneself and of one another.”

Buy your tickets now for the Seven Sisters Fest, and tune in to next week’s New Times for my interview with Stone Foxes frontman Shannon Koehler.

The Beat goes on 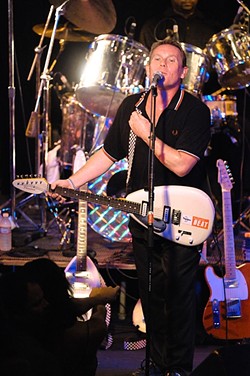 This Friday, June 26, Good Medicine Presents at SLO Brew one of the very best live dance bands to ever grace the face of the whole world, people! I’m talking about The English Beat (7:30 p.m.; 21-and-older; $21 presale  $23 at the door), who in 1978 led the ska revivalist charge and created classic ska standards such as “Mirror in the Bathroom,” “Stand Down Margaret,” “Doors of Your Heart,” “Save It for Later,” “Jeanette,” “I Confess,” “Ackee 1-2-3,” and the awesome ska versions of “Tears of a Clown” and “Can’t Get Used to Losing You.” Since frontman Dave Wakeling revived the band, I’ve seen them maybe half a dozen times, and they sound great—just like I remember them when I’d endlessly listen to their albums in high school. You’ll be doing the pogo all night long.

On Saturday, June 27, at SLO Brew, Good Medicine hosts Lil Debbie (7:30 p.m.; all ages; $12 presale or $14 at the door), a former member of the now defunct White Girl Mob. Since then, her song “Brain Freeze” went on to garner more than a million views. She’s now about to release her first full-length album, California Sweetheart.

On Wednesday, July 1, Good Medicine Presents Fairground Saints at SLO Brew (8 p.m.; all ages; $5). According to press materials, “Los Angeles-based trio Fairground Saints creates their warm and wistful sound by playing off the delicate contradictions at the heart of their music.”

Patrick Hayes and Twang N Bang Records is at it again with another kick-ass show this Thursday, June 25, at Camozzi’s in Atascadero (9 p.m.; 21-and-older).

“Two Cow Garage is one of the hardest working bands in America, and they’ve been touring behind their most recent album for almost two years while releasing EPs and singles along the way,” Hayes said. “Despite the name, Two Cow is no hokey faux Americana band playing up a hillbilly image, but rather they are a tremendously propulsive and dynamic rock ’n’ roll band, the kind Mom used to make. They fall into that category of ‘have to be seen to be believed.’ The only thing that eclipses their incredible live show—I’ve been to dozens of their shows in the past few years—is the master-craft level of songwriting backing that live show up.”

Austin stomp-and-roll duo the Ghost Wolves as well as Hayes’ band Dead Volts are also on the bill.

Time is running out for you to enjoy Próxima Parada as you currently know them. The New Times Music Awards winner for Best Live Performance and Best Blues and R&B is about to lose a core member, but they have one more show scheduled in SLO Town this Friday, June 26, when they play Concerts in the Plaza (5:30 to 7:30 p.m.).

“This is a very significant performance for us, because it will be our last public performance with Bryson Bailey before he moves to Denver. Bryson is one of the founding members of our band, a singer, songwriter, and guitarist. His contributions to our band are beyond words, and Próxima Parada will be an entirely different beast without him,” drummer Andrew Olsen said. “We regret to see Bryson go, but unanimously feel that this will be a positive move for him, and a constructive challenge for the rest of our band. The remaining three of us will continue to play together as Próxima Parada, and have several concerts booked through the summer and into the fall. We do hope to periodically reunite with Bryson for performances in the future.”

These are some talented performers, and even though Bryson has been instrumental to their success, I bet Andy, pianist and singer Nicholas Larson, and bassist Kevin Middlekauff will soldier on. 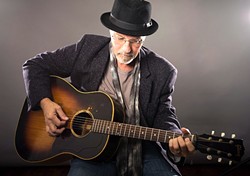 Multi-instrumentalist Starr has roots in Arkansas blues, country rock, and classic rock. He counts The Band, Jackson Browne, The Eagles, Eric Clapton, and Todd Rundgren among his influences.

Starting at 14, he played drums and sang lead vocals with numerous local bands in northwest Arkansas before picking up guitar and starting fronting his own band both in Arkansas and Aspen in the early ’80s. He’s shared the stage with the Nitty Gritty Dirty Band, Dan Fogelberg, Kenny Edwards, and others.

Reservations are strongly suggested by calling the SLO Central Coast Chapter of the Alzheimer’s Association at 547-3830, Ext. 203. If you get the message machine, please leave your name, number of guests, and a return phone number.

Oakland-based writer/pianist Carolyn Chen calls her solo act Underwoman and the Believers and Portland-based author/musician Dao Strom calls her solo project The Sea and The Mother, so they’re naturally perfect to tour together, as they will this month with a stop at Linnaea’s Café this Thursday, June 25, at 8 p.m. (free). Strom is releasing a book and album project, We Were Meant To Be A Gentle People (a memoir) with East/West (an album). Chen is releasing her second EP, no. 2. The classically trained pianist is a film and indie music lover. This should be appropriately weird and wonderful.

San Diego-based Americana, folk, and rock act The Silent Comedy plays a free Good Medicine Presents show this Friday, June 26, at Tooth & Nail Winery (5 to 9 p.m.). The Zimmerman brothers (Jeremiah and Josh), along with their cohorts Chad Lee and Justin Buchanan, create “a whiskey-fueled tent revival” feeling at the shows. Food, wine, and beer will be available for purchase.

SLO Folks is bringing Laurence Juber for two shows this weekend. The two-time Grammy Award winner is most famously known as guitarist for Paul McCartney’s post-Beatles band Wings. He’s a finger-style player Pete Townsend declared “a master!” He’ll play solo on Friday, June 26, at 7 p.m. in Coalesce Bookstore ($22; call 772-2880) and with his trio on Saturday, June 27, at 7 p.m. at Castoro Cellars for an outdoor concert ($22; call 238-0725; dinner is available starting at 6 p.m. for an additional charge).

Submit your music to the New Times Music Awards, either online or by filling out the entry form on page 45 and bringing it to our office. Entries are due Monday, July 6, by 5 p.m. ($10 per song entry fee). Readers Choice voting runs from July 30 through Aug. 13. The awards and showcase happens Friday, Sept. 25, at the Fremont Theater, and musicians must be able to perform that evening to be eligible to win.