Whether you go for the craft beers, the music, or the camping (which is now sold out), the inaugural Seven Sisters Fest promises to be a ton of fun. Held on Friday and Saturday, July 12 and 13, at El Chorro Regional Park, the event features an eclectic collection of performers, a wide selection of brewers, and lots of great food. You can get all the details and buy tickets at sevensistersfest.com. 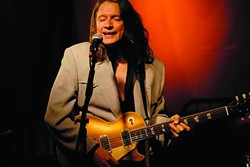 At 6:30 p.m., Gangstagrass takes over to play what they call Rappalachia—a blend of hip-hop and bluegrass. If you’ve heard the theme song to the FX series Justified, you’ve heard “Long Hard Times to Come,” which was written and performed by Gangstagrass and received an Emmy nomination for outstanding original main title theme music.

Poor Man’s Poison hits the stage at 8:30 p.m. From Hanford, the group of friends is influenced by reggae, rock, indie, pop, metal, and hip hop … which they funnel through acoustic country sound. Last year they won the Texaco County Showdown! 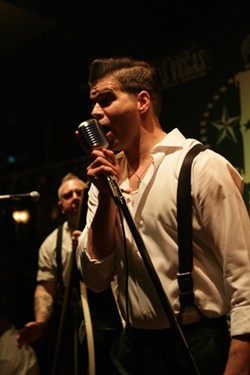 On Saturday, the music kicks off at 12:15 p.m. with City Folk. Keith Greeninger, Kimball Hurd, and Roger Feuer deliver meticulous three-part harmonies, and the subtext of their music is “Passion, Integrity, Respect, and Gratitude and a ‘hands and voices-on’ approach to making this world a healthier, happier, and better place for all its inhabitants.”

At 1:30 p.m., Honey Island Swamp Band takes over to unleash a jambalaya of soul, country, R&B, and blues. Their new record Cane Sugar shows just how diverse this group can be.

Sister Sparrow & The Dirty Birds are up next at 3:03 p.m. This eight-piece powerhouse of soul features Arleigh Kincheloe, whose big voice will knock you to the floor!

Robben Ford is a ripping blues, jazz, and rock guitarist who cut his teeth with Yellowjackets and Phil Lesh and Friends, and he’s collaborated with everyone from Miles Davis to Joni Mitchell, George Harrison, and KISS. He taught himself guitar at age 13 and never looked back. He hits the stage at 4:40 p.m.

Last but not least is Karl Denson’s Tiny Universe on stage at 6:30 p.m. A former member of Lenny Kravitz’s band, Denson got into straight-ahead jazz, joined DJ Greyboy to form The Greyboy Allstars, and had become a legend of Afrojazz crossover music.

All this music and more than two-dozen brewers on hand? Not a bad way to blow a weekend! If you want to avoid a line, I recommend you get your day passes in advance. Boo Boo Records and Tap It Brewing Co. have tickets, or go online.

On Thursday, July 11, head to the Shell Beach Café for a tribute to Woody Guthrie to celebrate what would have been his 101st birthday (July 14). You’ll hear more than 20 folk classics performed by the likes of Holly Ann Phillips, Ted Waterhouse, Randall Lamb, Erin Inglish, Sebastian Luna, Rebecca Troon, a duo called Panga, and the touring troubadour known as Lost Hills (6:30 p.m.; all ages; free).

Mike Mullins, Kenny Blackwell and Wally Barnick, collectively known as The Hay Dudes, return to Shine Café for a special dinner show on Thursday, July 11, from 7 to 9 p.m. Your $25 admission includes dinner! It fills up fast, but call 771-8344 for reservations, and if there’s no room this time, you can reserve for the next! Blackwell is a master mandolinist and student of Jethro Burns. He plays with the Laurel Canyon Ramblers. Mullins is also an expert with the mandolin and guitar. He’s close pals with David Grisman and was an invited guest on Grisman’s closing set at the Fall 2011 Strawberry Music Festival. Since 1993 Mullins has played guitar with the Cache Valley Drifters. Barnick is an old rock’n’roll guy who caught the acoustic music fever in the ’70s and has been a member of the Cache Valley Drifters since 1975, as well as made three European tours with the renowned music group Bluegrass, Etc. and is a featured vocalist on their award-winning album Home is Where the Heart is.

Concerts in the Plaza continues on Friday, July 12, from 5:30 to 7:30 p.m. with great local rock act Truth About Seafood. “Doors” open for food and beverages at 5 p.m. for this great, free community event held in Mission Plaza.

Grammy Award-winning guitarist Ed Gerhard returns to the area for a show on Friday, July 12, at Coalesce Bookstore (7 p.m.; $22 presale; 772-2880). This world-renowned musician is lauded for his “virtuosity, generosity, and humor … gorgeous tone and compositional depth.” He’s touring in support of his newest CD, There and Gone, a collection of originals that also includes an arrangement of “Imagine/Across the Universe,” a cover of “I’m So Lonesome I Could Cry,” and a concert favorite on his Weissenborn, “Killing the Blues.”

Reggae act Dub Seeds returns to Frog and Peach on Friday, July 12, with a 10:30 p.m. show. It’s hard to believe this reggae act comes from the same hometown as country legend Buck Owens and metal/hip-hop group Korn, but that’s Bakersfield for you! 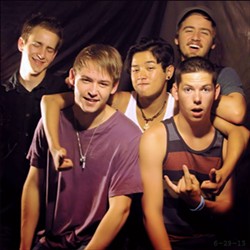 Cuesta Ridge just finished its third album, No Brakes, another great collection of bluegrass with rich vocal harmonies, virtuosic picking, and enough surprises to keep old fans freshly interested. Filled almost exclusively with original material (the boys tuck in the Motörhead cover “Ace of Spades”), the album is a clear demonstration of the band members’ growth as songwriters. They also still know how to have fun, as evidenced by track six, “Drinkin’ Whiskey.” And if you like gorgeous ballads, “Flora” is pretty stunning. Of course, as good as this album is, there’s nothing better than a live Cuesta Ridge show. See them Friday, July 12, at 6 p.m. at the Avila Beach Health Club; Friday, July 19, at 5 p.m. in San Miguel’s Silver Horse Winery; and Saturday, July 20, at 10 p.m. in the Merrimaker.

The SLO Jazz Festival presents the next installment of “Court Street Summer Jazz” on Saturday, July 13, from noon to 3 p.m. on the Court Street Terrace with the Mark Pietri Trio. Pietri is a great pianist, formerly of NYC, who delivers great straight-ahead jazz. Best of all, this show is free!

On Saturday, July 13, excellent local singer-songwriter Loren Radis plays from 2 to 4 p.m. at a free concert at D’Anbino (wine tasting for $5). If you’re a fan of Iron & Wine, Elliot Smith, and Damien Rice, you’ll dig Radis. 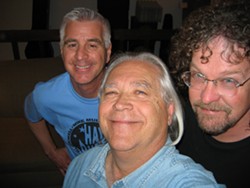 Painted Sky has another intimate concert cooked up for you this Saturday, July 13, when the incredible slack-key Hawaiian and Americana music of Patrick Landeza and Bill Griffin starts at 8 p.m. Landeza just won Hawaiian music’s most prestigious award, the Na Hoku Hanohano, and Bill Griffin is the longtime mandolinist with the Cache Valley Drifters. Griffin will be playing the mandolele, which he built specifically to achieve a mandolin tone that’s softer and more amenable to Hawaiian music. Tickets are $18 and available at Cambria Music Box Shoppe, Boo Boo Records, or by calling 927-8330. If not sold out, tickets will be available at the door.

Dead Zed’s Chopper will bring high-octane rockabilly to Mongo’s Saloon on Saturday, July 13, in Grover Beach. This Lompoc-based quartet puts on a great show, adapting songs outside the rockabilly genre into their sound. Since they feature a father and son bassist and guitarist, songwriting drummer, and versatile singer who got his start in the jazz world, you can expect solid musicianship and ultra-tight cohesion!

Kaye Bohler makes her triumphant return to SLO County with two shows for the week. She had a hugely successful SLO Blues Society show in May and a great though sparsely attended Christmas show at MoTav back in December. According to Bohler, she’s determined to see live music back in MoTav on a more regular basis. Her hope is that bringing her band through will open the door for other touring blues and R&B acts to have a venue on the Central Coast. Kaye also spent the last year reconnecting with her SLO County fan base, playing in Paso Robles at the intimate concert venue D’Anbino. “As SLO County goes, some will drive the grade and some won’t,” Bohler explained in press materials, so she’ll return to D’Anbino on Saturday, July 13, at 8 p.m., and then she’ll play on Sunday, July 14, at 7 p.m. in MoTav. Each show costs $15 at the door. Find out why Downbeat magazine says, “Kaye Bohler stands firmly in the blues tradition yet can turn on a dime into soul sophistication.”

Arroyo Grande’s Village Summer Concert Series continues on Sunday, July 14, at 1 p.m. on the Rotary Bandstand with Unfinished Business, a band that plays great covers of all your favorite ’60s rock and soul acts. Hear familiar songs from everyone from The Animals to The Zombies and including The Beatles, The Beach Boys, The Rolling Stones, Jimi Hendrix, Led Zeppelin, and more.

The Sizzlin’ Summer Concert Series and Farmers Market continues on Sunday, July 14, with The Crisptones from 3 to 6 p.m. in Ramona Garden Park. If you like rock with hints of country from a band that once won the Adult Contemporary Band of the Year from the L.A. Music Awards, this is the show for you.

Palmdale alt-rock band Revolt With Reason plays Linnaea’s Cafe on Tuesday, July 16 (8 p.m.; all ages; free). Local act Green to White will open the show. Revolt With Reason formed in late 2009, spent a few years in the high desert developing its sound, and debuted with a demo EP titled Branch by Branch in 2011. The following year the quintet released the EP We’re Not What We Seem. This is an extremely young-looking band, but they’ve already got a lot of experience under their collective belts. Check ’em out!