There were still about 5,000 ballots left to count in SLO County by press time on Nov. 11, and the ultimate decision could rely on the last few votes in several races where candidates are neck and neck. 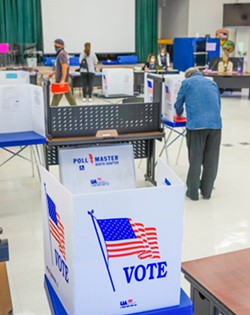 In Pismo Beach, unofficial election results from Nov. 9 show City Council candidate and newbie Scott Newton with a comfortable 12 point lead over his nearest opponents, leaving incumbents Marcia Guthrie and Erik Howell to battle it out for the second open seat—and the race is tight. While results from election night put Guthrie ahead of Howell by about 2 percentage points, Howell is gaining, and as of Nov. 9, he was trailing by just 51 votes.

The race for a two-year City Council term in Grover Beach is even closer now than it was on election night, with second-time candidate Robert Robert ahead of opponent David Duringer by 48 votes. While candidate Fred Buenrostro, Jr. was Robert's closest competitor in the initial results released on election night, Duringer jumped ahead over the weekend, gaining a two point lead over Buenrostro in the Nov. 9 results.

Incumbent Morro Bay Mayor John Headding had more than 50 percent of the vote as of Nov. 9, with candidate John Weiss trailing by 110 votes. And in San Luis Obispo, incumbent Andy Pease maintained a fairly significant lead over her opponents in the Nov. 9 results, while candidate Abrianna Torres gained on candidate Jan Howell Marx, landing about 500 votes short.

While the race for California's 35th District Assembly seat appeared close on election night, with incumbent Jordan Cunningham (R-San Luis Obispo) ahead of challenger Dawn Addis by just four points, Cunningham had gained a significant lead by Nov. 9, garnering a little more than 54 percent of the counted votes. Δ