With otters dying near the outfall pipe, should Morro Bay and Cayucos take another 10 years to clean up their act?

A surging wave of protest is rising in Morro Bay over the continuing discharge of partially-treated sewage into the ocean, near one of the areaâ€™s most popular swimming and surfing beaches. 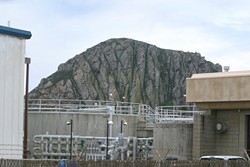 # More than 300 people have written or e-mailed the Regional Water Quality Control Board to object to a clean-up timeline of nearly ten years, proposed by the City of Morro Bay and the Cayucos Sanitary District. Citing high numbers of dead and dying sea otters near the sewage outfall off Morro Strand Beach, as well as possible beach pollution, the objectors are asking the Regional Board to require the sewage treatment plant for Morro Bay and Cayucos to come into compliance with the U.S. Clean Water Act â€œas fast as possible.â€?

Â â€œPeople do care, and they do want their sewage plant to meet baseline standards. Itâ€™s barely treated sewage. Nine and a half years is too long to wait before upgrading. Our oceans are in crisis,â€? says Anjali Jaiswal, an attorney for the Natural Resources Defense Council (NRDC), a national environmental group that wants to see Morro Bay and Cayucos upgrade the sewage plant sooner, rather than later.

Â Morro Bay is virtually the last place on the California coast to give in to pressure to treat its sewage to the level spelled out in national law, before pumping it into the ocean. Ever since the plant was rebuilt with a longer outfall pipe in the 80s, itâ€™s had an official waiver from full compliance with the water quality standards of the Clean Water Act.

Â Now, after several years of negotiations with the NRDC and the Regional Board, wastewater officials have finally voluntarily agreed to upgrade the Morro Bay/Cayucos plant to full secondary treatment standardsâ€”but theyâ€™ve asked for nine and a half years to complete the project. The Regional Water Quality Control Board meets March 24 in San Luis Obispo to consider whether to grant yet another waiver, so Morro Bay and Cayucos still wonâ€™t have to comply with the secondary treatment standards required by federal law.

But a waiver canâ€™t be issued unless thereâ€™s proof of a healthy marine ecosystem, according to the Natural Resources Council. â€œThe sewage plant has the burden of proof to show thereâ€™s a balanced indigenous population of wildlife in and around the plantâ€™s outfall zone. Thereâ€™s overwhelming scientific evidence showing the population is not in balance, with a disease epicenter affecting a â€˜sentinelâ€™ species, the California sea otter, nearly on top of the sewage plantâ€™s discharge pipe,â€? Jaiswal points out.

Â â€œMorro Bay is a hotspot for the iconic southern sea otter, an endangered species, and emerging evidence shows theyâ€™re in decline.â€?
If you flush a toilet or wash your hands in Morro Bay or Cayucos, what goes down the drain makes its way to the sewage treatment plant at the end of Highway 41 in Morro Bay, overlooking the long sandy beach north of Morro Rock.

Â Once it gets there, it travels along a â€œtreatment trainâ€? at the plant, before being pumped down a 2900-foot pipe that angles to the north beyond the breaking waves. The outfall spot is marked by two red-and-white buoys bobbing in the swells, clearly visible from the Morro Rock parking lot.

Â How many steps are in that treatment train is an issue here. Primary treatment involves settling out the solids in the sewage, sometimes described as pulling out the condoms and Coke bottles. Secondary treatment uses an assortment of filters and micro-organisms to clean up the effluent. Tertiary treatment includes sterilization and a final disinfection, resulting in reclaimed water that can be used for irrigation and other purposes, a system used at San Luis Obispoâ€™s sewage plant.

Â Currently, whatâ€™s flushed in Cayucos or Morro Bay sometimes makes just one stop on the treatment train. Depending on how much wastewater is flowing to the plant, the sewage may or may not go through some secondary treatment before it hits the outfall pipe. Water quality officials call it â€œa blendâ€?: the plant has the capacity to run one million gallons a day through some secondary treatment, but another 200,000 gallons or so just has the solids removed before itâ€™s discharged into the ocean. During summertime and holidays, when more people are flushing, the wastewater â€œblendâ€? includes more sewage thatâ€™s had only one stop on the treatment train.

As long as the sewage plant is being upgraded, environmental groups argue, Morro Bay and Cayucos may as well go for tertiary treatment. It just makes sense, they say, especially for our drought-prone communities. Morro Bay decision-makers are starting to agree, especially since they can use reclaimed water to irrigate golf courses, sports fields and parks. But Cayucos, with less of a need for irrigation water, is dragging its feet at the extra expense.

Â That timeframe has â€œa lot of fat,â€? according to Jaiswal, adding that the upgrade could be completed in half the time. A waiver is â€œnot intended to provide cover for bureaucratic wrangling,â€? the NRDC contends.
Â Decision-makers in Morro Bay and Cayucos are pointing to Los Osos to justify the long timeline theyâ€™re seeking, according to the Sierra Clubâ€™s Christie. â€œTheyâ€™re saying, â€˜Look what happened to Los Osos. Be afraid, be very afraid. We need extra time or the Regional Board will come down on us like the hammer of God.â€™â€? He calls the situation â€œhighly ironic.â€?

Â As for the diseased and dying sea otters, Thompson at the Regional Board believes the culprit is the Morro Bay estuary, not the sewage outfall pipe, although he says more study is needed. After scientists linked otter deaths to an organism known as toxoplasma gondii in cat feces, Regional Board officials wanted to see if feces-loaded flushable cat litter in the sewage system could be to blame, and required a monitoring program.

Â â€œMorro Bay is the only city asked to monitor for toxoplasma protozoa,â€? Thompson explains. â€œThere was no method, so they had to work with Fish and Game. They hung sacks of mussels on the outfall buoys, and after a year of expensive monitoring they didnâ€™t find any toxoplasma in the mussels. Thatâ€™s the reason I believe the discharge is not affecting the marine environment.â€?

Â He calls on Morro Bay and Cayucos cat owners to bag up their petâ€™s feces and dispose of it in the trash, where it can be taken to a landfill. â€œItâ€™s much better not to flush it down the drain,â€? he adds.
Â But for the Sierra Club, the toxoplasma issue is â€œthe wrong problem.â€? Christie says, â€œToxoplasma should have a minimal, non-fatal effect on healthy sea otters. The documented accumulation of toxins around the outfall pipe as the immune systems of local sea otters continue to deteriorate indicates much.â€?

Â The Regional Board is likely to be deluged with conflicting testimony when it considers the Morro Bay/Cayucos plant next Friday. At a similar hearing several years ago in Goleta, board members listened to testimony from environmental groups and then opposed a Clean Water Act waiver for Goletaâ€™s sewage outfall to the ocean. The Goleta Sanitary District agreed to upgrade its sewage plant to full secondary treatment. They were given ten years to do the job. âˆ†

Award-winning journalist Kathy Johnston can be reached at kjohnston@newtimesslo.com. Â