Check out the Pretty Things Peepshow! 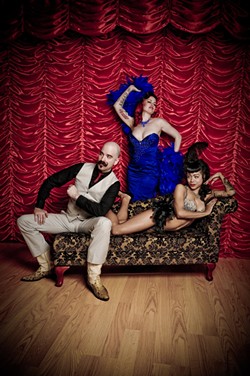 Sword swallowing! A human blockhead driving nails into his nose! Fire eating! Chainsaw juggling! Walking across broken glass! Escaping a straitjacket! The Chinese execution blade box! Whip cracking! Knife throwing! Aerial dancing (maybe, if they can find a way to hook it up)! Hula hooping! Comedy! Live music! And best of all, burlesque in the tradition of Gypsy Rose or Sally Rand and beyond!

This sounds so fun I’m almost regretting going to Live Oak Music Festival for the weekend, because if I were in town, I’d be here for sure. It sounds as campy as the Viva Las Vegas burlesque show but twice as dangerous!

“I don’t think SLO has any clue what they are in store for with this show,” said promoter Katalena Pennington of Purrrfect Productions. “I’ve never seen anything like this here. I was very excited to book the Cali tour for them since I knew that would allow me to bring this to SLO, and really how often do we get a chance to enjoy a vibrant show like this with burlesque and sword swallowing and sideshow entertainment? This is one show no one will want to miss! This will be a jaw-dropping, edge-of-your-seat, one-of-a-kind show!”

Portland-based Americana rock act The Ascetic Junkies, who usually play as a quartet or quintet, are stripping down to a duo for a run down the coast, including a stop at Linnaea’s Café on Thursday, June 14 (8 p.m.; all ages; pass the hat).

“We’re a pop band with more than a passing interest in Americana, noise, and psychedelic song structure quirks,” wrote the band. “We’ve been inciting audiences to dance and sweat all over the West Coast and beyond since 2008. The band has its roots in a merging of rock and bluegrass, but after self-releasing an album in 2008, we started indulging in the pop, Americana, indie realm. Since then, we’ve tried our best to constantly evolve our sonic palette without losing the core focus of our sound, which has been made easier by the distinct sound of our dual-lead-vocal center. Kali and Matt write the songs, and Cole and Stephen help take them and twist them into something unique, fun, and shape-shifting; we have been fortunate enough to gather fond comparisons within the pop world as diverse as the Avett Brothers, the New Pornographers, and the Dirty Projectors.”

The group released three albums in the last four years, and they say “2012 finds us planning to tour more than ever, recording a lot of new electrified material that intentionally sits on the border between ‘really catchy’ and ‘pretty weird,’ and taking in the sights while driving back and forth across the country to bring our tunes to fans in towns big and small. Most of the touring this summer will feature a stripped-down duo version of the band (just Kali and Matt) doing a more intimate, eclectic set that highlights our love of dynamics, vocal harmonies, and fun arrangements.”

Eat some delicious oysters and listen to some crazy-good music from noon to 8 p.m. on Saturday, June 16, during the Central Coast Oyster Festival at the Morro Bay Golf Course.

You’ll hear Internet sensation Walk Off the Earth, a multi-talented Canadian indie band whose cover of Gotye’s “Somebody That I Used To Know” is performed by five musicians on one guitar, and has dominated YouTube with more than 100 million hits. I was the 118,228,975th view! They also recently signed to Columbia Records.

“We are so lucky to have attracted the likes of Walk Off the Earth,” said Jacqueline Delaney, marketing and sales director for OPTIONS Family of Services. “They’ll complement the Oyster Festival’s off-beat, high-end culture nicely.”

Tickets for this full-day experience of all things oyster are $20 and are available at centralcoastoysterfestival.org.

Fans of authentic, down-and-dirty, vintage-sounding R&B, put the champagne on ice, bust out your party dress, and get ready for the best surprise of the year!

On Sunday, June 17, the incomparably polished class and sass ensemble The Strata-Tones are going to release their debut CD, Dressed Up to Fess Up, with an album release party at The Pourhouse (5 p.m.; $5).

Guitarist Bruce Krupnik (who’s opened for everyone from Tommy Castro to the Cadillac Zack Blues Review) and drummer Rick Pittman (who’s played with B. B. King, Tower of Power, Wilson Pickett, Etta James, and many more) co-founded this polished blues and neo-soul group—a band that’s tighter than a virgin’s daughter! The group is fronted by the powerful vocalist Valerie Johnson, who toured with Big Brother & the Holding Company to sing songs made famous by Janis Joplin. The group also includes harmonica sensation Kevin McCracken, keyboardist and Hammond organ player Ken Burton, and bassist Wil Anderson.

What’s really going to blow you away as you listen to this material is that it’s nearly all original, with music by Krupnik and lyrics by McCracken and Johnson. These songs fit seamlessly into the R&B tradition, with wholly engaging lyrics, like this little sample from “Bebop Baby”: You know how all those girls thinkin’ they’re so out of sight? Pushed up, low-cut, looking tight. Out on the town, tryin’ to make some time. We know it’s all right baby, ain’t no crime.

The album is already getting airplay on blues radio stations around the world, and the kudos have come fast and furious. Sheryl and Don Crow of the Nashville Blues Society gushed, “The Strata-Tones have taken traditional blues and given it a contemporary twist. With a powerhouse vocalist and an irresistible backbeat that can’t be denied, enjoy Dressed Up To Fess Up tonight, and be sure to bring your dancin’ shoes!”

Catch these guys now before they head out to tour in support of this impressive debut!

Holy guacamole, Batman, I’m really surprised Lil Kim hasn’t sold out at SLO Brew for Thursday, June 14, but as of this writing, there were still tickets for the sexpot rapper (8 p.m.; 21-and-older; $32 presale or $35 at the door). Don’t wait or you might be left out in the cold and not hear tracks like “Queen Bitch,” “Big Momma Thang,” and “Suck My Dick.” 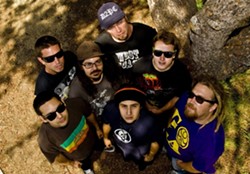 The heads should be out in force on Wednesday, June 20, when Fortunate Youth returns to the club (8 p.m.; all ages; $10), with Tatanka opening. Fortunate Youth hails from Redondo Beach and is known for their rootsy approach, heavy bass lines, and harmony vocals. The positive vibe band has been a favorite of extreme sports video soundtracks.

Mark your calendar for Thursday, June 21, for Diego’s Umbrella, when the San Diego-based band brings their patented “Spanish surf Mexicali Gypsy pirate polka” music to the club (7:30 p.m.; 21-and-older; $10 presale or $12 at the door). This, my friends, is a show!

Steve Key’s Songwriters at Play keeps bringing you original music week after week; somebody ought to give him a medal! This Thursday, June 14 (6:30 p.m.; all ages; pass the hat), he kicks off his showcases at the Porch with Philippine native Aireene Espiritu, who moved to the United States at age 10 and now lives in the Bay Area. She learned guitar to play the songs of Robert Johnson, Leadbelly, Etta James, Nina Simone, and Odetta, which formed the basis for her own style: folksy, rootsy, and frequently backed on a tenor ukulele.

On Sunday, June 17, Steve takes his show to Sculpterra Winery for headliner Eliot Randall (1 p.m.; all ages; pass the hat). This country-tinged performer and leader of the San Francisco-based alt-country band the Dead Men might be the perfect father’s day gift.

Then on Tuesday, June 19, Kreuzberg is host to Don Lampson (6:30 p.m.; all ages; pass the hat). Don’s music smells like old leather, French perfume, gunpowder, sweat … in other words, an Old West whorehouse filled with gamblers, cowpokes, and beautiful women with loose morals.

As always, each showcase features five or six other performers playing four-song sets.

Folk, roots, and world music duo Round Mountain returns to the area for a concert at the Steynberg Gallery on Thursday, June 14 (8 p.m.; $15; call 547-0278). Brothers Robby and Char Rothschild are touring in support of their new album Windward, and play a variety of instruments including accordion, highland pipes, trumpet, bouzouki, kora, and various percussion instruments. Local singer Inga Swearingen will open this intimate concert, as will Moira Smiley.

Art Emr’s Great American Songbook returns to D’Anbino on Friday, June 15, from 7:30 to 10 p.m. Art received a vocal lesson from Old Blue Eyes himself, “Which I strive to honor within each performance,” he said. Art’s previous concerts sold out, and this one features London’s chanteuse Kerry Mayling and renowned jazz accordionist Robert Moloznik, and will be performed to honor Central Coast “Military Parents and Friends” ($10 admission; $5 for Record Club members; call 227-6800).

The SLO Museum of Art is host to a special evening of jazz on Saturday, June 16, when the amazing vibraphone player Nick Mancini plays a 7 p.m. show ($28 for SLOMA members; $36 for general admission; tickets at sloma.org). Mancini will be joined by keyboardist Otmaru Ruiz, and together these two are on the front lines of modern jazz. Mancini was the Los Angeles Vibe Summit honoree in 2011, and he blends classic song book melodies with new interpretations. Venezuelan Ruiz is known for his versatility and virtuosity. And to top it off, you can witness this exquisite jazz concert surrounded by Robert Burridge’s stirring artwork!

What sounds more incredible than a collection of highly trained human voices singing in harmony? Not much! The a cappella vocal jazz ensemble Down 4 the Count will be performing at the Steynberg Gallery on Saturday, June 16, at 8 p.m. I checked out their video demo on YouTube, and they’re the real deal! Don’t miss this gifted and inventive ensemble.

Brett and Julia Mitchell will deliver a sparkling evening of jazz standards at D’Anbino on Saturday, June 16, from 8 to 10 p.m. Brett’s melodic piano and Julia’s rich vocal bring heart and soul to each performance ($10, or $5 for Record Club members).

On Sunday, June 17, the Famous Jazz Artist Series at D’Anbino continues with trumpeter Don Rader, a former star soloist with the bands of Stan Kenton, Woody Herman, and Count Basie. Rader has long been one of the most sought after trumpet artists both in America as well as internationally. Bassist Ken Hustad and drummer Darrell Voss will provide the rhythm, and series co-producers Charlie and Sandi Shoemake will also appear. There’s a 4 and 7 p.m. show, each for $15, or see both for $20. Call 927-0567 for reservations.