Sha Sha and the creatures

Sha Sha Higby's creations are like nothing you've ever seen

A conversation with Sha Sha Higby recalls that strange state after waking but before regaining the ability to distinguish dreams from reality. When I met the artist, whose intricate works transcend the disciplines of fine craft, sculpture, and performance art, she spoke softly, her movements seeming almost in slow motion. Her voice threatened to blow away in the wind as we sat outside the San Luis Obispo Museum of Art, where her exhibit “Noh Works” was being installed. 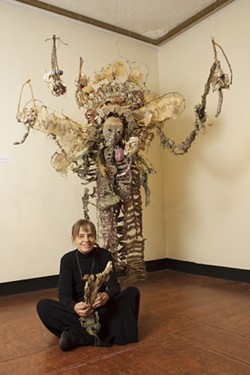 Higby creates densely layered sculptures and costumes out of things that, individually, could be art pieces on their own. The costumes in particular—which employ wood, silk, gold leaf, ceramic, lacquer, fabric, and paper—can take years to complete. Higby, now based in Bolinas,  assembles creations heavily influenced by her travels in Japan, Indonesia, Burma, Bhutan, Thailand, and India. While living in Japan, she found her work was particularly inspired by Noh, a Japanese tradition of masked dance dating back to the 14th century.

“I’d say that Noh theater inspired me to do what I do now,” she said. “They were moving with such deliberation and emotions. It’s very slow theater.”

The stylized silhouettes and masked characters in Noh—both of which seem to de-emphasize the wearer’s physical form, hinting at a kind of godlike presence—can also be seen in Higby’s opulent, earthy sculptural costumes. But while her work is clearly affected by Noh, as well as many traditional Asian crafts and techniques, the finished pieces are wholly her own. Watching Higby move inside, her slight frame completely obscured by a costume’s many sides and faces, is haunting and hypnotic. It’s as if a new culture has been discovered, a new tribe, one with complex rituals we cannot decipher, but which, we intuit, are laden with significance.

The evolution of Higby’s artwork began when she learned to sew. Her first projects were puppets and dolls, which toy stores, she recalled, quickly dismissed as “too spooky” for actual children. After learning the art of Noh theater and mask-making in Japan, where she also undertook courses in calligraphy and the art of the tea ceremony, Higby received a Fulbright-Hayes scholarship to pursue dance, shadow puppet making, and other performing arts in Indonesia, where she lived for five years. It was the start of many years of education through cultural immersion, including a stay in India studying textile arts, thanks to an Indo-American Fellowship, and, more recently, another year in Japan mastering the art of urushi, a type of Japanese lacquer.

Today, Higby’s art is an amalgam of highly trained craftsmanship and spontaneous, intuitive, physical creation. It’s hard to accept that the woman performing onstage and the creator of her intricate costumes are one and the same, as both sides of the process require a completely different range of skills. And yet they must be one and the same.

In a recent performance piece, titled In Folds of Gold, the artist emerges onto the stage in a suit that resembles highly whimsical armor. It looks heavy, yet its joints allow her to move about with surprising dexterity. It’s impossible to tell where her real face might be, as there are ever so many masks leering out emptily from the costume, starting at the chest and extending in a kind of tower above the heavily adorned headdress. One of them opens to reveal a second mask hidden behind it; another has been deliberately split apart, with a slender, sinewy object pouring out of it. As she moves, many dangling objects, each one carefully twisted, carved, sewn, or lacquered, create a delirious cacophony. Her walk is low to the ground. When I liken it to the slow lumber of a bear, she gives me a surprised look and a laugh, before suggesting that the walk may have been subconsciously influenced by the sumo wrestling she used to see on Japanese TV.

While Higby often collaborates with dancers, she never fully relinquishes a performance to others. It’s always her in there. To allow anything else, it seems, would be unthinkable.

“You make this thing, and it’s an extension of yourself,” Higby explained, watching the street kids and their dogs passing over the creek. “And to put someone else in it … ,” she trailed off, as if the very idea were too disturbing to contemplate.

What’s more, she added after a pause, “I will often be planning it right up until the last minute. My rehearsal is in the making of it. It goes over a period of about a year and a half. As I perform with it, it develops. Things occur to me during the show.”

Sometimes a piece will evolve so much over several performances that it will branch off into a separate work altogether. Such was the case with a piece titled Sleeping in a Sandstorm, which gradually morphed into the work Folded Under a Stone Sleeping, as she performed the piece at art festivals, museums, and galleries throughout the United States, Canada, Australia, Europe, and Asia.

In Folded Under a Stone, Higby emerges as a great, multicolored, lacy being, head emitting a steady stream of smoke, with a golden mask and delicate wings like that of a pink and purple cricket. We hear a chorus of insects chirping as a small puppet descends onto the stage from above, which the artist begins to experiment with, perhaps curiously. As in all of her performances, Higby moves with a meditative slowness, as if underwater.

I asked her to speculate what the effect of such a piece on the viewer might be.

“The inside is the outside,” Higby began after a contemplative pause. “We’re all interwoven, linking, unraveling, flowing, clustering … ,” she gazed into space, appearing lost in thought.

“Things will loosen from one piece and then join to another piece. There’s relief in that, that we’re not just separated,” she continued. “Clusters, energy, linking, flowing, passing through … people feel a beauty in that.”

Arts Editor Anna Weltner is too spooky for actual children. Contact her at aweltner@newtimesslo.com.