"Open up your window now/ The streets are full of song/ Step out on your balcony/ And we will sing along," Shadowlands sings on their stunning new single "Not Alone," whose lyrics were inspired by videos of quarantined Italians singing to their neighbors from their balconies.

"You are not alone/ The sun will kiss you/ You are not alone/ The earth is with you," the song begins. "She rises up to meet/ The bottoms of your feet/ She holds you where you stand/ She holds you when you sleep// Though you feel the ache of isolation/ Still there is no real separation/ Our lives are intertwined/ Like honeysuckle vines/ And though we are apart/ You're vibrant in my mind." 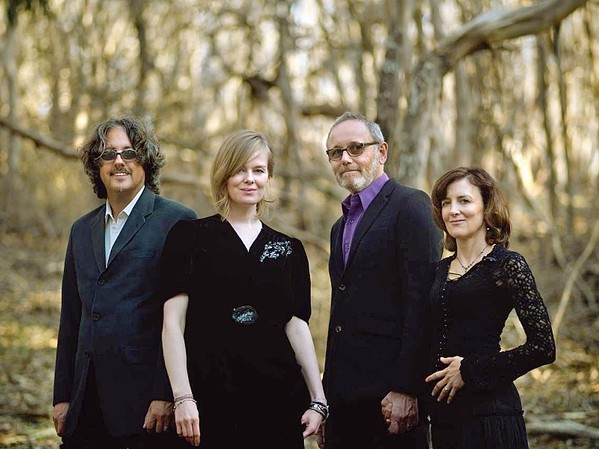 It's a typically gorgeous song from this ethereal folk quartet, which is made up of two married couples who recorded the song responsibly.

The initial harp, guitar, and vocal tracks were recorded at home by Karoline Hausted and Mark Davis. Wendy and Bob Liepman added harmony and cello to the shared tracks from their home.

The song is Shadowlands' response to the lockdown, and as Bob Liepman wrote via email, "It reminds us that, while keeping personal distance, we are still connected." Due to an illness last week, local supergroup The FrenZ rescheduled a planned livestream for this Saturday, May 23, at 7 p.m., from their Facebook page, @thefrenzmusic and twitch.tv/kllewis1982.

I call this a supergroup because it's led by Kenny Lee Lewis, who for the last 38 years has been a touring member of the Steve Miller Band, playing bass and guitar, and writing and producing material with Miller. The FrenZ features musicians who all grew up in San Joaquin Valley during the '70s, including bassist/vocalist Bobby Santa Cruz, who's well-known to local audiences, as well as guitarist/vocalist Marty Townsend, and drummer Wyatt Lund (of The Truth About Seafood).

Make donations through PayPal at kllewis@charter.net or Venmo at @Kenny-Lewis-32. Co-partnering with Musicares, Spotify, and Sweet Relief, they've been sharing 25 percent of donations collected during their livestreams to help unemployed musicians and their families during this crisis.

"Tune in and have your socks blown off while benefiting all musicians across the board who have had their tours canceled and venues closed down," the band said. James Gallardo—a local bassist, composer, and private instructor—will be doing a livestream of his bass/vocals/drum show from Caliwala market in Santa Margarita this Saturday, May 23, from noon to 3 p.m. Gallardo is a Cal Poly music department grad who as an 8-year-old developed a love of music that's never waned. He started with classic rock, pop, and heavy metal and has continued into jazz, classic, electronic, and beyond. In case you're not familiar—it's pretty new after all—Caliwala is a community market and deli with an emphasis on fresh, local, and sustainable items. Curbside pickup is offered, and it's operated by local banjo player and singer-songwriter Erin Inglish!

Che Miller and Colleen Gnos of the Mother Corn Shuckers will be "sippin' at the tiki bar" every Sunday, including this Sunday, May 24, at 3 p.m. from their backyard hangout, which you can stream on Miller's Facebook page, @CheTiki. "Some of the Shuckers show up to jam," Miller wrote. "We usually try and support a small business, but we are now trying to raise money to finish the new album." Tip these guys and let's get a new Shuckers record!

Shawn Clark has a new album coming out from a side project called Spirit World with Ryan Delmore and Chris Beland, and they'll present a livestream on Sunday, May 24, from 7 to 9 p.m., broadcast on the "Here nor There and Everywhere" Facebook page. I haven't had a chance to hear what they're up to, but all three of these players are the real deal.

If nothing else, the shelter-in-place order has given local musician John Wessel and his band Shameless time to get a couple of CDs out, one a Wessel solo album called Smoke and Mirrors, the other a Shameless CD called Everything Happens for Reason. 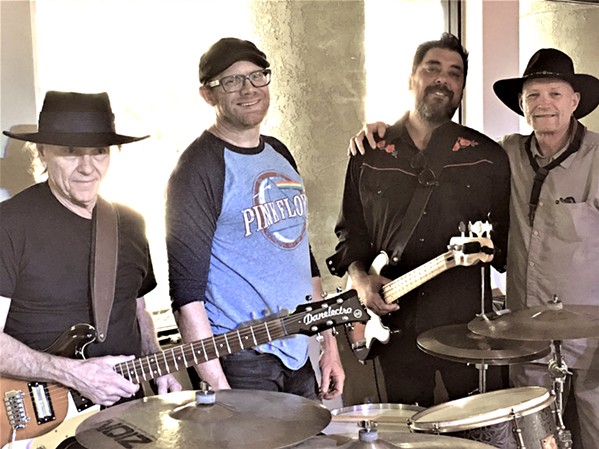 The fidelity on the discs isn't always top of the line and can vary between tracks, suggesting a piecemeal approach to recording, but the passion is 100 percent, and Wessel's reedy tenor, flute and guitar playing, and '70s sensibility is always welcome.

"I'm already writing and recording for 2021," Wessel wrote via email. "I'm practicing the instruments I don't play every day, though. Sometimes I'm overwhelmed with all the horrible news on the state of the world—not a good time to think clearly about song lyrics, at least for me. I've also been closely watching who is conforming to the situation and doing what they can to help by self-imposing the stay-at-home measures. [Early in the pandemic] I was surprised and angry at the way several self-serving people were willing to keep their doors open in the clubs and bars just make a dime."

Wessel is one of the hardest working musicians in the county, playing three or four gigs a week before COVID-19 hit.

"I was also disappointed in many musicians who were willing to keep playing to crowds like nothing was happening," he continued. "I'm now focused on the future of music and the entertainment field on the Central Coast and what it will look like. For the first time in my lifetime career of performing since the age of 10 years old until now, I'm considering slowing my rate at which I will perform next year. As you know, Shameless has never stopped playing live shows in 35 years and maintained our band name all this time. Not many other local bands can claim that."

The new Shameless CD consists of all originals except a cover of Van Morrison's "Moondance." It's clear why prior to the coronavirus they were one of the most sought-after working bar bands in the county. They deliver danceable, feel-good music. Will Wessel and Shameless be back in full force after restrictions are lifted? That remains to be seen.

"I will be very conscious of the venues I play next year," Wessel said. "I want to play only places that were thinking of the public's health more than the greed of money. I feel the same about the musicians I will chose to work with. I miss performing live for sure. I'm thinking about how I want to play out less next year but by playing only the places I want to and giving each show 100 percent of my energy and soul."

Cliff "Crawdaddy" Stepp and his band The Cliffnotes sure look like they had a lot of fun recording their new "The House of the Rising Sun" parody "The House of the Rising Pancakes," available on YouTube. The track is a tribute to the International House of Pancakes with new lyrics layered over the traditional tune made famous by The Animals' 1964 recording. Check it out! I bet a lot of music lovers can't wait to see this band live again! Δ