It’s Saturday, July 31 and Anna Robertshaw and I are walking into the SLO Little Theatre to see Suzy Miller’s Shimmy, Shake, Shine! It’s martini night, and since Anna and I came directly from McCarthy’s where we were drinking Jameson whiskey and cheap American beer, my first thought is, does gin go with whiskey?

We haven’t eaten yet, so we should have made a beeline for the food table, but we head for the bar. Priorities, people! We order two dirty martinis, and the bartender Jason Wilkinson makes them positively filthy. Good man! 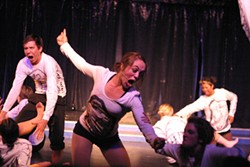 These martini nights at the Little Theatre are awesome because they also put out great chow. In fact, the mac and cheese is absurdly good—rich, cheesy, and delicious. There’s also little veggie and roast beef sandwiches, making both Anna the vegetarian and me happy.

The bell tolls and we head for our seats, and after Managing Artistic Director Kevin Harris comes out and gives his spiel, Suzy Miller hits the stage to explain her show, which turns out to be a delightfully disjointed mess of styles and ideas. Got ADD? No worries! Suzy’s show moves so quickly from one theme to another, from one stylistic choice to another, I dare anyone to be bored by it.

I get a big kick out of the very first number that features a gospel choir and a Pollyannaish little white gal who looks like she couldn’t hold a note with these powerful singers but then belts out the song with a voice dripping with soul. Then added to the mix comes a trio of lingerie-clad women. WTF? Those three initials continue to pop into my head throughout the evening. Suzy’s show is endlessly inventive and thoroughly surprising.

Even more impressive is how she manages to make this postage stamp-sized stage work for so many performers. There’s not much room to move, so Suzy cleverly goes up: She uses windows at the top of the set and several aerial dance rigs that drop from the ceiling throughout the performance. She also has some strong male dancers who launch their female counterparts high into the air.

Comedy mixes with tenderness, poignancy shares the stage with slapstick, and the show rolls on. One guy in front of Anna and I seems especially enthusiastic, whooping and clapping loudly throughout the show, sometimes mid-performance when something impressive happens.

After intermission, it’s more of the same: insanity, excitement, and surprises. It’s the fastest two and a half hours ever, and the audience rises to a spontaneous standing ovation on this, the closing night of the show. People wander out and congratulate the performers, and Anna and I see Suzy and tell her that her vision is … well, she’s a freakin’ nutter! I’m surprised audience members didn’t have seizures!

Shimmy, Shake, Shine! is like the monkey house in the zoo, sans poo flinging. It’s gorgeous, manic, and suffering a bad case of multiple personality disorder. In short, I loved it.