Shaken? Stirred? There's no wrong way to enjoy a martini!

If the key to happiness really is enjoying the simple things in life, I'll take mine straight up with a twist.

While the martini is a seemingly straightforward glass of class—a few ingredients shaken or stirred, an olive or a curl of lemon peel seductively perched in the silhouette of a martini glass—its legend is as hazy as an evening following a three martini lunch. The martini could hail from the town of Martinez, where a gold miner high on his luck had the local barkeep concoct a boozy new cocktail called "The Martinez Special." Possibly that basic recipe followed the miner along his travels to San Francisco, stripping ingredients from the original concoction along the way and refining his favorite celebratory beverage.

New York's Knickerbocker Hotel has also been named as a place of origin, or it could be named after Martini & Rossi vermouth, a key ingredient in the drink. Wherever it stems from, this sophisticated slurry of gin (or vodka, if you prefer) and vermouth has been a staple since the 1800s.

The boom era for martinis came in the '50s and '60s. Businessmen and lunchtime cocktails were ordinary pairings, and wives were ready to wind down once the day was done. What is it that gives this simple splash of icy liquor the air of class and decadence? This type of research is tough, but I'm a dedicated professional and had no choice but to hit up the experts for their thoughts ... and perhaps a taste test or two!

I turn to a lady who I know can both make and take a drink. SLO Elks Lodge bartender Tiffany Cisneros is my trusted advisor on all things booze. Her technique for achieving perfection with this classic is fun to watch. She ices down the glass with a splash of soda water—a key requirement according to every barkeep it seems.

"Once the glass is ready, I toss the ice and splash some vermouth in there," Cisneros explains. "People get wide-eyed with worry because it's more vermouth than most people care for."

However, before adding the vodka or gin that has been prepared to order, Tiffany demonstrates a fancy flick of the wrist to both coat the inside of the glass and discard the remaining vermouth. Next, she pours in the main liquor and adds an olive or lemon peel as garnish.

"Most people want that bit of ice floating at the top that you get with shaking it, and they seem to usually want vodka over gin and very little vermouth," she says.

Like it dirty? Top it off with a little olive brine, just enough to salt the drink.

My journey continues to the opulent Madonna Inn, where bar manager Jimmy Berlow fills me in on the technicalities of a traditional martini. He explains that martinis were stirred traditionally, but the popularity of James Bond's catchphrase, "shaken not stirred," shifted the tide to the icier, watered down version of the cocktail.

"Technically, you shouldn't shake any drink that doesn't contain fruit juice," Berlow says. "It isn't as taboo with vodka and gin drinks, but shaking liquor with ice does a couple of things—it adds water, diluting the strength; it oxidizes the liquor as well; and whiskies will lose middle flavor notes. It doesn't matter as much with vodka, since the good ones are supposed to be flavorless. With gin, the oxidation actually will enhance the juniper flavors."

Other changes have been lobbed at the classic cocktail over the years. According to Berlow, the cocktail used to be closer to 1 1/2 ounces of gin to 1/2 to 3/4 of an ounce of vermouth, but these days most bars use the vermouth rinse Cisneros demonstrated. 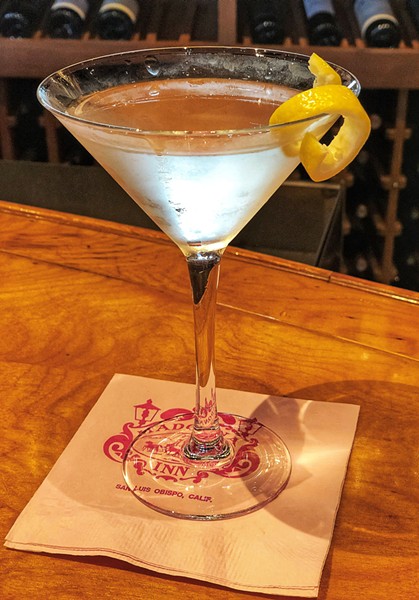 When I asked about all the various "-tini" drinks, Berlow assures me that those are not martinis simply because they're served in the same glass.

"Change seemed to come about around the '80s," he says. "We started seeing more popularity in fruity cocktails like cosmopolitans being served up in martini glasses. By the way, that glass shape is the worst. It's designed to look elegant, not be picked up, not walked with."

Trust me, Jimmy, I know. Nothing feels less elegant than slopping pure booze down your front when you're only on round two. Next time you feel ripped-off at a bartender for a less than to-the-rim pour in a martini glass, remember: They're really doing you a favor.

Whether you prefer it shaken or stirred, so dirty it tastes of seawater, clean and crisp with a twist, or somewhere in between, Berlow assures me that there really is no "wrong way" to imbibe.

"However you drink your drinks isn't wrong—after all, you're the one enjoying it," he diplomatically explains.

It appears that as with all drinks, if you tip well and come often, bartenders will be happy to serve up your favorite version of a martini—just don't ask for it blended. Δ