Check out the history of zinfandel in SLO County during a Wine History Project tour of the Zin/SLO exhibit at SLO's Dallidet Adobe on Nov. 2 from 2 to 4 p.m. The Wine History Project of SLO County also hosts monthly food history events on the second Monday of every month. Next up is a talk about the county's seafood industry, held at SLO Provisions in downtown SLO on Nov. 12 from 5:30 to 7 p.m. To learn more about the organization and upcoming events, visit winehistoryproject.org.

When a red wine glass is on the table in front of you, the waitress is handing you a glass of Eberle Mill Road Viognier, and it's not even noon yet, you know you're in for a good Sunday brunch.

Pecans, bacon, and apples coated in poppy seed vinaigrette are forthcoming as Gary Eberle launches into the reasons why he chose a viognier instead of a chardonnay to start this meal off on Oct. 14. Truth is, he says, he prefers red wine, but if it has to be white—then viognier is the way to go.

About 25 people are gathered in the back room of McPhee's Grill in Templeton, ready for a Sunday funday meal and some food and wine history education to go with it. This event, spearheaded by the San Luis Obispo Wine History Project, is focused on Ian McPhee (of McPhee's Grill) and Gary Eberle (Eberle Winery). Both were pioneers in their respective industries as the 1970s became the 1980s in SLO County.

The viognier gets swapped for a 2016 Eberle barbera and the salad becomes steak and eggs with pesto and a generously thick slice of grilled bread, which our table decides to drizzle with the Creston-based Molefina rosemary olive oil that's on the table. Yes, it's as good as it sounds.

This whole production of food and wine is just the appetizer.

As we finish, food historian Sarah Lohman digs into her talk. Fig cake, manchego cheese, and blackberries make the rounds—and a couple of extra splashes of barbera stream into my glass. Lohman, the author of Eight Flavors: The Untold Story of American Cuisine, breezes through a quick history of food from medieval times to present, brushing past steak au poivre, World War II France, and Spam along the way to the modern food revolution in California. Fresh ingredients, traditionally prepared, and brought to the Golden State by Alice Waters of Chez Panisse in Berkeley, Sally Schmitt of French Laundry in Napa Valley, and Wolfgang Puck of Spago in Los Angeles.

That's where our protagonists make their debut.

Libbie Agran, director of the Wine History Project of San Luis Obispo County, introduces Eberle and McPhee by saying both of them got their start in 1972. McPhee had graduated from Cal Poly with no interest in food or becoming a chef. Eberle decided he wanted to become a winemaker and was accepted to UC Davis. McPhee eventually worked for the food service at Cal Poly, where he introduced changes such as purchasing fresh fish from local fishermen rather than using frozen fish. Eberle graduated and moved to Paso Robles, searching for just the right soil to plant the grapes he wanted to grow. 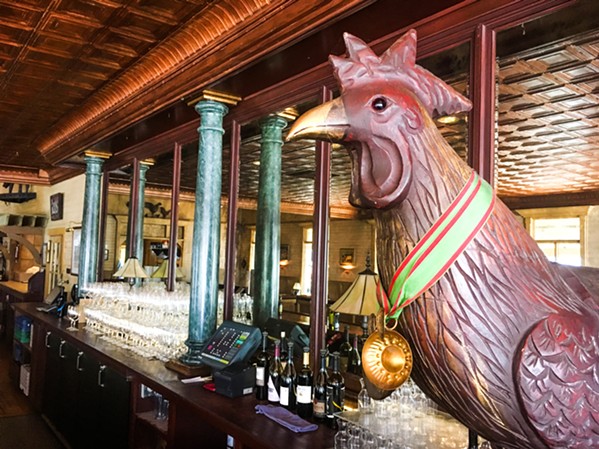 Eberle brought science to the area, Agran says, and knowledge garnered from Napa's Robert Mondavi. How to grow the best grapes, make the best wines, and also market them.

Eberle helped establish the Paso Robles AVA (American Viticultural Area) in 1983. The wine he named for himself had produced several vintages by then, and the winery was built that year. McPhee became the chef at Ian's in Cambria that year, where he used recently published cookbooks by famed chefs such as Waters to experiment. According to Eberle—a self-described food guy—it was one of the best restaurants on the coast.

"For dinner, in 1973, the best, most consistent place for dinner was Denny's," Eberle says, adding that Ian's changed all that. "He says he didn't know how to cook. I don't know how much of cooking is intrinsic. ... But Ian's was spectacular. ... He was one of the first chefs that we had."

With that experimentation came the hunt for locally sourced ingredients—something McPhee describes as difficult in the 1980s, especially in Cambria, which wasn't on any of the normal delivery routes. He found local goat cheese and crème fraîche, a squash guy, and other local farmers, but meat was a little more difficult.

"[We were] trying to source a duck, and there was no duck around. So we were sourcing it from a guy in San Francisco and he would send it down on the Greyhound bus," McPhee says, adding that he would make the trip into San Luis Obispo to pick it up and the boxes would be dripping with melted ice. There was also someone in Salinas who they sourced wild boar from. "It was a pretty wild time for those kinds of things."

Together, Agran says, the chef and the winemaker started the first winemaker dinners on the coast—purposefully pairing wine and food together for the first time in SLO County.

As I finish off the last of the barbera, I think about how little I know about wine, food, and its history. Eating food created by McPhee and drinking wine created by Eberle while listening to them talk about the past, and all the steps that led to this moment, is real. It's not just an interesting story in a magazine about something I will never experience.

It's something I can experience again. I can visit McPhee's Grill in Templeton for a meal or go wine tasting at Eberle Winery in Paso Robles and think about this meal and the people connected to it. About how two young people contributed to change the course of a small rural area of California 30 years ago, and how delicious the aftermath of experimentation can taste. Δ

Editor Camillia Lanham is salivating for the future at clanham@newtimesslo.com.